The BlackBerry Z10 could have been a contender for the best smartphone in America, had it been released four years ago. Instead, it was released for the first time in America Friday on AT&T for $199 on contract, for the same price (and in the same year) as the far more polished iPhone 5, Galaxy S 4 and HTC One.

Here is a smartphone that was born too late, that should have debuted years ago when Apple was still refining iOS and Android was still a laggy, unattractive, pixellated goop of icons and widgets.

So while the Z10 brims with solid ideas about smartphone productivity and the best touchscreen keyboard I've ever used, its glitchy software, unimpressive app section and general, unavoidable rawness render it virtually un-buyable for all but the most devoted BlackBerry zealots and bravest early adopters.

1. The on-screen keyboard is, I think, the best I have ever used on any smartphone. It is fast, accurate, responsive and very easy to get accustomed to. While I never found an occasion to use the automatic word suggestions that pop up above each letter as you type, it didn't really matter: Typing on the QWERTY was quick enough. If only Google or Apple could figure out how to make such an excellent keyboard.

2. The Hub is BlackBerry's smart take on the Android Notifications Bar (and, uh, Apple's not-at-all stolen Notifications bar), and it appears to have a much smarter organization. Instead of a list of updates segregated by app, if you swipe all the way to the left on the Z10 you get to the Hub, which is a column that quickly shows you the number of new updates you have in each of your primary apps. If you have a new update, you tap on the name of the app and it takes you there. Simple, smart, fast. 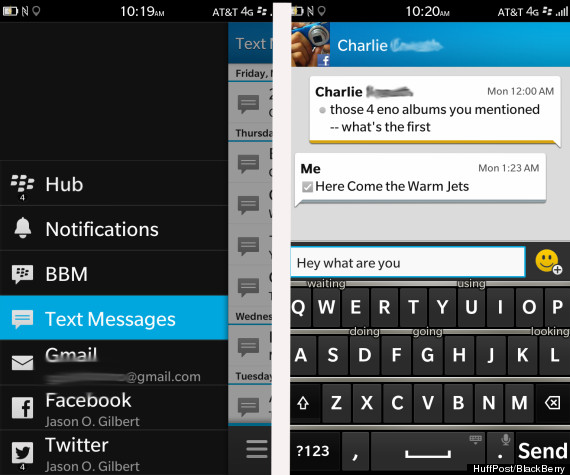 Two screenshots: The BlackBerry Hub, on the left; the fantastic BlackBerry Z10 keyboard, on the right.

3. Sleep! From the homescreen, you can swipe down from the top and turn notifications off for a set amount of time, which is similar to Apple's Do Not Disturb function but can be accessed much faster. Again, a nice feature that, hypothetically, increases your productivity by decreasing the amount of time you have to spend on your smartphone.

4. One-Handed Use. There is a fairly persistent argument in the nerdier corners of the web about the importance of one-handed smartphone use, and just how important it is to be able to completely operate your smartphone using one hand while you drive or walk down the street or otherwise keep one hand occupied elsewhere.

Well, the BlackBerry Z10 is easier to operate with one hand than the iPhone is, which was heretofore the easiest. There is no home button on the Z10, only a button on top to power the display on and off. All navigation is accomplished by a new system called Flow, an apt name for the series of cross-screen swipes needed to access absolutely anything on the Z10. Swipe all the way right to get to your familiar tray of icons; swipe all the way left to view the Hub; swipe up from the bottom to zoom out and go to any screen; swipe down from the top to access settings.

This was a bit harder to master than the keyboard, but I found myself comfortable with Flow in a few days. It's not perfect -- sometimes I longed for a home button to just get me to the icons already -- but if you're someone who is constantly trying to get things done with one hand, you would appreciate the speed with which Flow allows you to switch between apps, screens and accounts.

The Z10 represents BlackBerry's first real attempt at a modern smartphone; as such, most of its faults result from its newness. Apple, Samsung and HTC have been building versions of its current smartphones for years, and are on their sixth and seventh generations. This is a first-generation device with first-generation issues.

1. The Apps. BlackBerry is boasting that it has 100,000 apps in its BlackBerry World store, but there are two problems with this brag:

I had problems loading and refreshing Twitter on my Z10; Facebook often updated with friends' statuses from months ago; BlackBerry's Maps application failed to locate three different establishments -- one of which was the Barclays Center in Brooklyn -- when I searched for them. These are the apps that are pre-loaded on the device; again, they are all first-generation, so they will take time to improve. On iOS and Android, these apps are far more refined.

And, too, the absences: There is no Spotify, or Netflix, or Instagram. When will these arrive, if they ever do? It depends on device sales, I'd guess, which fans of Windows Phone know is never a guarantee.

2. General glitchiness. Apps crashed; the device registered touches I wasn't making; connectivity would be lost and then recovered without warning. All of this could be fixed by a subsequent update to the firmware, which manufacturers push to customers all the time. Here's hoping. The level of glitchiness I experienced was unacceptable when measured against competitors' devices.

3. General Ugliness. Windows Phone and iOS both pride themselves on gorgeous design choices, and even Android is showing some signs of beauty; by those standards, BlackBerry's OS is hideous. Everything just looks very flat and uninspired, like BlackBerry chose the layout and then forgot to clean up the font and images. This is especially true of the icon tray, which looks like a rough sketch of the first generation of Android. BlackBerry 10 is an office of fluorescent lights, cubicle farms and moldy carpeting in an age of soft lighting, standing desks and wood floors.

Berry ugly: BlackBerry needs to up its design game, fast.

4. Battery Life: Was a bit disappointing. Lasted through the day, but only barely.

Summing up: The Z10 is a good first effort for a company that should be making its fifth effort by now. And while the company shows enough promise and fresh ideas to make us excited for the Z11, it did not execute the Z10 well enough to make us want to purchase it. Stick to the iPhone 5, Galaxy S4, HTC One or Nexus 4.

For two more in-depth reviews of the Z10, check out our partners at TechCrunch and Engadget. For further reading, see "Miniver Cheevy" by Edgar Arlington Robinson. 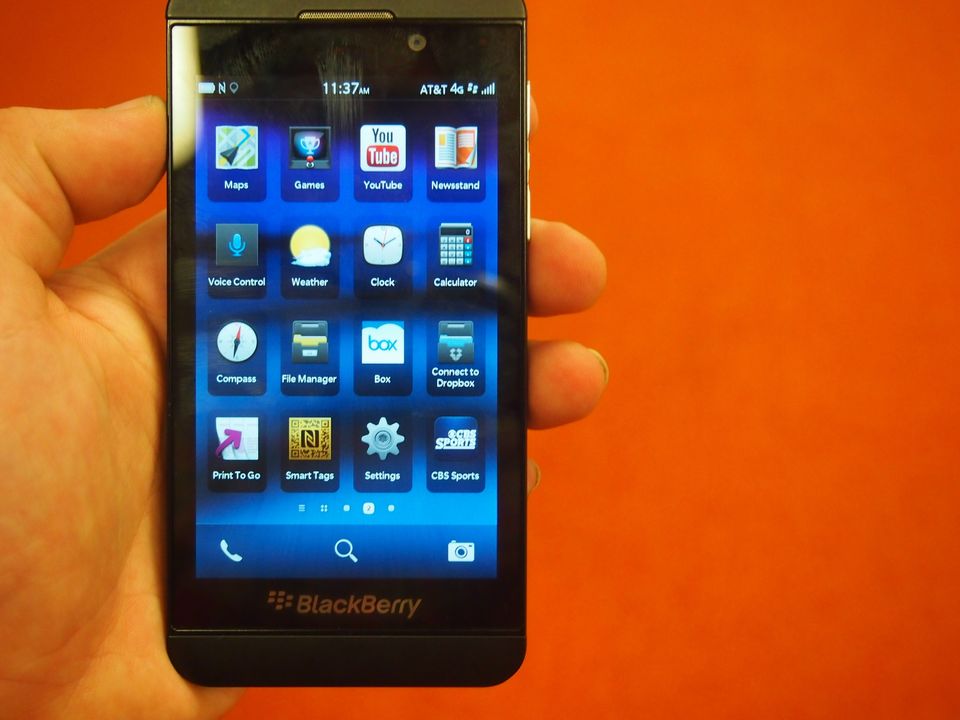