BlackBerry's awkward unveiling of the company's new Android smartphone exposed a long-held belief that continues to restrict the company's performance.

The performance fell flat. Fortune and Engadget pounced on Chen's abysmal presentation as he stumbled his way through the first public look at the company's next big bet.

But the concern shouldn't be about the horrible product pitch. As potential customers and investors we should be questioning the corporate belief that allowed it to happen. 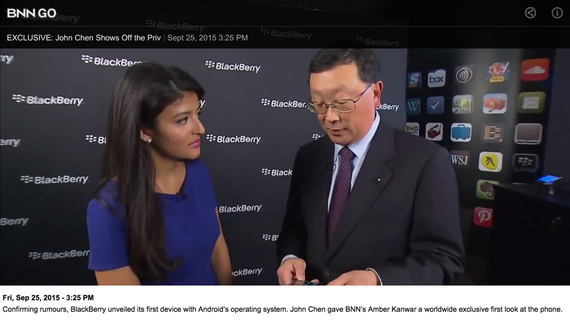 In its recent earnings release BlackBerry reported a hardware sales decline of 42% in the first six months of fiscal 2016 compared to the same period in 2015. The company is pinning the slip on "decreased demand due to intense competition and the Company's aging product portfolio."

With the fate of the company riding on a successful product launch we're right to expect a focused, powerful campaign.

We didn't get that because of a corporate belief carried over from BlackBerry's glory days: that the sales responsibility lies with the channel partners, not BlackBerry.

The company's direct customers have always been global wireless communications carriers, third party distribution companies and enterprise clients. BlackBerry never really had to speak to us, the people holding its smartphone in our hands.

But Apple changed the marketing game. Steve Jobs and his execs spoke directly to us. Apple CEO Tim Cook and his team continue to stage a magic show every year and make us proud to stand in line, cheered on by our fellow Apple enthusiasts.

Although enough criticism has already been thrown at CEO John Chen's product pitch, it's valuable to point out what made it weak. A transcript of the interview shows Chen made five major gaffes, each one harshly magnified against Apple's beautifully crafted presentations.

1. A confused storyline.
BNN: "This is the phone. The Priv?"
Chen: "The Priv. Now it stands for privacy."
BNN: "Ok not privilege?"
Chen: "Privilege and privacy. Privacy and privilege. Actually privacy is the, umm... it's what you get? Security is what we provide? And privilege is what you end up. And it, that's how we think about it, ok?"

3. Poor product knowledge.
BNN: "And this is the first curved?"
Chen: "First curved. Yeah. Of ours. Um, and you have the latest specs. I mean literally, the, you know, the latest Qualcomm specs, and, and the cameras and all that good stuff."

4. A weak claim to fame.
"And, and the, and... it's touch obviously, you saw that, and the claim to fame, obviously, is the, is slide. That's why a lot of people would call it a slider. You slide out and have the QWERTY keyboard."

5. Tired benefit statements.
"And the QWERTY keyboard also has capacitive touch. So this could be your mouse. When you're looking at... when you just... your finger would be like a mouse, the... When you're looking at, like, ahh, web. Web. You know you're doing your web surfing. And, or you, or, or reading text, you know, big text, or doing big, reading big email, and, so you can move it around."

Smartphone marketing today requires an emotional connection with the consumer. We demand the story. At its own peril, BlackBerry hasn't recognized that yet.