Know what happens sometimes when you speak up against actual bullshit in the cosplay community that nobody wants to talk about in hopes that the issue will resolve itself without any real effort on anyone’s part? You get swarmed and trolled by racists while being called a bully (by people attempting to bully you) all for saying that blackface (and any other race-facing) is ugly, insensitive and unnecessary.

For half a week now, this has been my reality. Luckily, I have relatively thick skin, so the harassment is more annoying for me than anything else. How’d it all start?

I saw a post in which a girl was cosplaying Candela (team Valor’s Pokemon Go gym leader).

Initially, such a thing would be great. I love Candela. Unfortunately, the cosplayer in question decided to don blackface in the name of “accuracy” in order to do so. Even more unfortunately, she didn’t look like any black person I’ve ever seen. She came out looking quite orange.

To me, it was the perfect example of why the use of blackface is not only wrong, but just doesn’t work. She attempted to portray a beautiful character with darker skin and instead missed the mark completely and came out looking rather traffic cone.

After several people calmly (and some not so calmly) attempted to let her know that she, perhaps unwittingly, engaged in a racially insensitive behavior, the girl not only openly stated that while she knows “people in America” think blackface is wrong (despite the fact that it has negative connotations around the globe), but she will continue to do it because cosplay in her country is “more serious and on another level,” and that she doesn’t care what anyone else thinks.

It really is. Shit rarely ever looks good or natural. It’s aesthetically off-putting and startling in unpleasant ways. Your cosplay looks way better without it. Unless you’re going for a character with fantasy tone like red, or blue, etc. just rock out in the skin you’re in!

Even if your intentions are pure, you have to understand that due to the history behind things such as blackface, yellowface, redface, etc., it’s bound to rub many people the wrong way. Real people’s skin tones aren’t cosplay props or costumes. I cited her Candela as an example, as seen below:

This resulted in many people agreeing, a handful disagreeing, and eventually the cosplayer herself telling me how much she doesn’t give a shit if anyone finds it wrong or offensive, demanding that I remove the post, as shown below. While I did apologize to her if she felt bothered by it, I explained to her that I would not be taking down my post.

As you can see in the screenshots of our interaction, I told her that her decision to blackface anyway is fine (in the sense that she has to deal with the consequences, and I’m not going to lose sleep over it). And it is. I can’t make anyone change, and I don’t have it in me to force it. All I can do is provide my perspective, which is exactly what I did.

My stance on the issue is that it’s insensitive and ugly (it really never looks right). Cosplay whoever you want. I don’t care if white people want to cosplay black characters. I’ve cosplayed white and Asian characters. Anyone should be able to cosplay who they want.

My issue was never that she was a white person cosplaying the clearly black Candela. It was that she decided to slather herself in dark makeup, knowing it was something that many take offense to. It was that, even when people gave her the benefit of the doubt, she lashed out and said she doesn’t give a fuck.

After the post was gone, I didn’t attempt to address her or contact her further, assuming that since the post she wanted removed was taken down, I would not be hearing from her anymore. I made another post instead, in which I restated my stance on blackface in cosplay, devoid of anyone’s image, without referring to her or anyone else other than myself.

I said that I’ve never personally experienced anyone failing to recognize what character I was going for, even when I’ve cosplayed non-black characters, so the argument that blackface is needed for “accuracy” or to be recognized as a given character is invalid. I also mentioned that I placed in a contest as Harley Quinn, “who is quite literally white,” and that I didn’t have to paint my skin in an effort to look like a white girl to do it.

It was on this post (and eventually several others), that the Candela cosplayer and several of her friends decided to spam my page in defense of blackface, calling me a bully, saying that me winning “some low contest” doesn’t mean anything, and hurling other pettiness, racism and insults my way.

After this, I decided to write a blog post on my website about the experience. More harassment ensued, and it was brought to my attention that the cosplayer and several of her friends were all publicly plotting and planning out their harassment, including planning to do a group cosplay in blackface and thinking of insults to post onto my page.

These are just a few screenshots depicting the immature, racist and frankly quite bizarre, brand of cyber-bullying I’ve been dealing with. At the time of writing, I’m still having to ban people from my page who are leaving petty insults and telling me that I’m:

* Racist (for saying anyone can cosplay whoever they want without doing something as problematic as black facing???)

I’m tired of everyone ignoring the elephants in the room when it comes to cosplay. It shouldn’t be controversial for anyone to say that blackfacing (or any other “race-facing”) is kind of a shitty thing to do and doesn’t have a place in cosplay, and yet I’m current being cyber-bullied over it.

I’ve seen the same thing happen to countless others who bring up race and other touchy issues in the community, no matter how calm or careful they may be. We try to pretend like nerds are more accepting than “mainstream” society, but we’re not separate or special. We are subject to the same highs and lows as any other subculture. We cannot continue to ignore discrimination and insensitive behavior based on someone’s color, race, size, gender, etc. and try to excuse it. We can’t bully those with enough courage to address it by saying that they’re the problem.

Speaking up about something that is wrong is not bullying. Trying to silence people when they’re telling you “hey, this bothers me and isn’t ok” isn’t what we should be doing, nor is pretending cosplay and nerd culture don’t have issues and lashing out at the wrong people. We should be listening and trying to understand one another ― not turning a blind eye to bullshit and getting mad at people who point it out. We gotta do better, guys.

We can’t bully those with enough courage to address [racism] by saying that they’re the problem.

I’ve received so much racist and idiotic hate mail and harassment on my page in the last few days that it’s unbelievable. I’m not sorry for making my statement about blackface. If you think I’m a bully, you are mistaken. Holding people accountable when they do something wrong is not the same thing as hurting innocent people who are minding their own business and haven’t harmed anyone. I think a lot of people in the cosplay community have forgotten the difference between the two, but I’m confident we can get to a better place, and that there are more good people than bad.

I’ve had many people come to me directly, or comment on a share of my original blog post, saying that intent is more important than actions when it comes to this issue. I have to disagree. While some may not intentionally set out to harm or offend, the outcome is the same.

Look at it this way: If I attempt to toss you a ball and it ends up hitting you in the face, it will still hurt you, and I still hit you in the face, even though I didn’t mean to. Rather than me growing indignant and laughing off any reaction you may have, the right thing for me to do would be to apologize and be more careful next time. The same rule applies when it comes to the issue of blackface in cosplay, as it does with anything else in life.

Finally, here are two resources that do a decent job of explaining why blackface in cosplay is unnecessary and insensitive for anyone interested:

PHOTO GALLERY
11 Women On How Cosplay Empowers Them

Blackface Is Ugly, And I'm Being Harassed: A Tale Of Cosplay And Cosplayers Gone Wrong
11 Women On How Cosplay Empowers Them 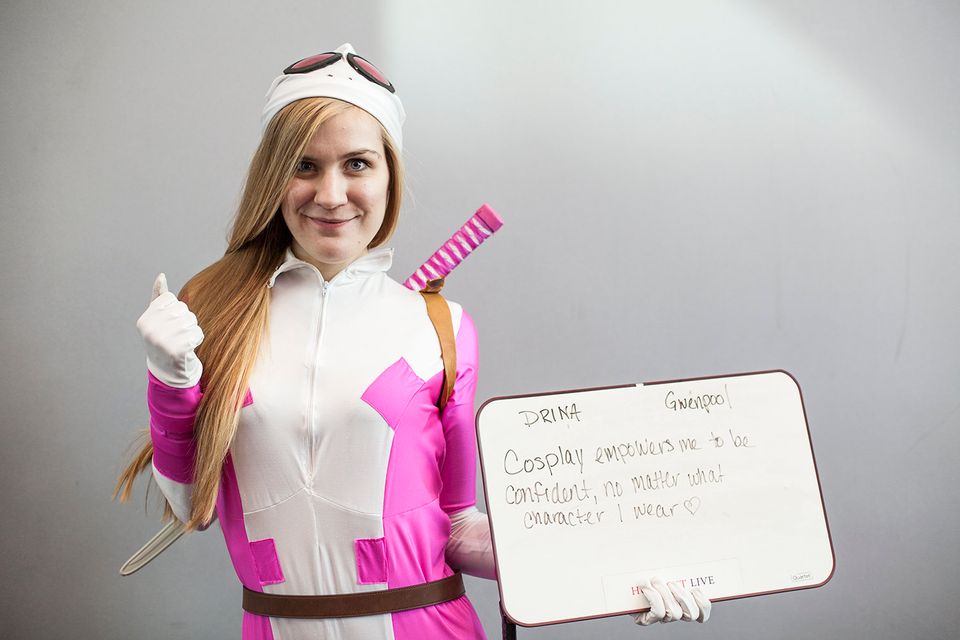 1 / 11
"Cosplay empowers me to be confident, no matter what character I wear."
Tiara Chiaramonte