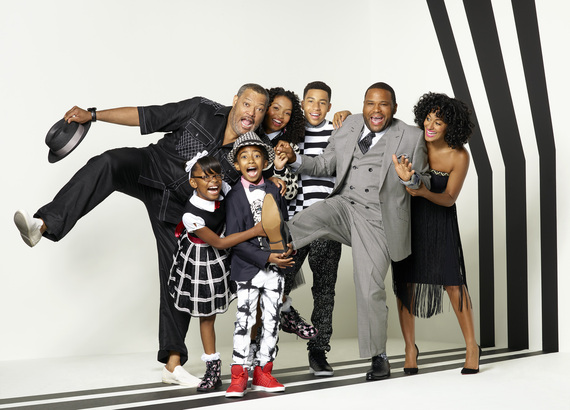 Following the success of an impressive network debut, ABC's standout series Black-ish steps into its second season having secured a spot amongst the most celebrated shows on television.

Anchored by the dynamic, Emmy-nominated duo of Anthony Anderson (Dre) and Tracee Ellis-Ross (Rainbow), the cleverly insightful sitcom brilliantly brings to life the different experiences of a hard-working family battling with the challenges of first-generation affluence -- and that family happens to be black. The show's premise places an observant lens on public perception and the looming stereotypes that often plague the black experience, while seamlessly rolling out a hilarious combination of inside jokes multiple generations of African Americans can connect with.

"It's about living the American Dream, while assimilating to this homogenized world and maintaining a sense of identity," said Anthony Anderson. "We pride ourselves on telling stories that are diverse to spark point of view and start conversations."

At the finish of their first season, the series soared, rising to become the second-highest rated show on primetime television next to Fox's breakout drama Empire. More notably, Black-ish received a 2.28 rating with the 18-49 year-old demographic.

"We knew we were doing something special," said Kenya Barris, creator and executive producer of the show. "Based on our experiences, we believed we had the ability to tell honest stories as truthfully as we can with some humor."

It's about living the American Dream, while assimilating to this homogenized world and maintaining a sense of identity. - Anthony Anderson

Speaking to the impressive strides the show has made thus far, Anderson gives credit to delivering a strong solution for the longtime absence of such shows on television. "It's been such a long time since major network TV had a black family comedy, so people weren't expecting it," Anderson stated.

The last memorable programs to make a massive run on national television depicting accomplished and aspirational black families were The Fresh Prince of Bel-Air and The Cosby Show. Like Black-ish, both reflected a tight-knit group of relatives with colorful personalities sharing one roof, ranging in age and interests, operating under a set of guiding principles that merged tradition with changing times.

Though it's expected that nostalgic audiences may reminisce on that era when watching the show, Anderson and Barris have their sights set on setting a new trend for today's generation. "It's a tremendous compliment to be compared to the Cosby show, but we're focused on making our own mark here."

Despite tackling a variety of relevant topics that resonate widely within the black community, less than a quarter of their viewership is African American. "We'd love to reach our people," said Barris. "But, if the live audience wants to watch something else, they can easily say 'I'll just DVR Black-ish' - and DVR's are very strong amongst our African American audience as we go against one of the most successful shows in history in Empire." 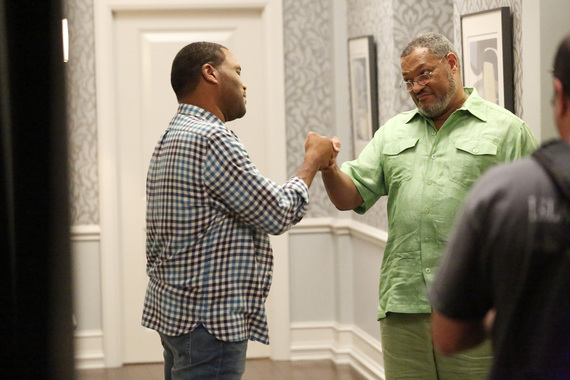 BLACK-ISH - "THE Word"-- Jack performs the song "Gold Digger" at a school talent show and when he sings a lyric that includes THE word, it leads to his possible expulsion from school. ANTHONY ANDERSON and LAURENCE FISHBOURNE (Photo courtesy of ABC/Kelsey McNeal)

Setting a bold and intentional tone for the new season, the premiere episode sheds a funny, yet soberingly truthful light on the N-word. As the country continues treading through the evident turmoil of racism, injustice and senseless killings, the timely topic strikes a sensitive spot for the black community.

"It's part of our culture, so we wanted to give an honest and unique take on it," said Anderson. "In this time when we're suppose to be an elevated society, the word is still as prevalent as Jim Crow."

Mirroring the difference in perspectives and beliefs about the word, the emphasis was providing a well-rounded look at where the N-word fits within different social circles and segments of society.

"In the episode, we give all of our characters a different voice," claimed Anderson. "It's low hanging fruit, and we see it as a right of passage - but culturally it's become a trend, or fad slang word colloquialized for everyone."

Promising to produce a collection of episodes that touch on several prevalent topics, everything from black men's health to how people view guns, season two is projected to be more transparent and progressive than ever. "Every week you're getting honest topics," declared Barris. "This is a show the whole family can watch uncensored, and each member can take something away from it."