This is the first installment in "The Great Return," an occasional HuffPost BlackVoices series about the shift of African Americans toward the South after the Great Migration to the North.

CHICAGO — Nearly seven decades ago, James Middleton was just a toddler when he watched a white man shoot and kill a black man in the little town of Lambert, Mississippi.

He had tagged along with his father to run errands and, giddy with excitement, sat in his daddy's Ford as they pulled up to a local restaurant. There was a commotion out front —a family friend arguing with the eatery's white owner, who had a pistol in his hand.

"I looked down and I could see this man, still trying to breathe, and blood was coming out of his chest," says Middleton. "I don't like to remember bad things. But it seemed like bad things were always happening to black folks."

Middleton's baptism in Southern violence was a consequence of being black at a time and place of cradle-to-grave segregation and senseless death. The specter of violence and inequality that his family endured eventually drove them more than 600 miles north to Chicago, making them a ripple in the wave of millions of blacks who fled the South in search of a better life.

They moved into a little place on Chicago's West Side with other working-class blacks. (The South Side, he said, was reserved for the more well-to-do and professional set). They joined a network of relatives, friends and other migrants.

The Middletons were among an estimated six million blacks to flee the South between 1915 and 1970, to northern cities like Chicago, Philadelphia, New York City, Detroit and Los Angeles in the west. They found work on automobile assembly lines or in manufacturing plants and factories in the industrial North. They laid roots, raised families and gave their children opportunities that many could never have imagined for themselves back home.

But today, generations later, amid higher costs of living, concerns over crime and what many perceive as too few job opportunities in those same cities, African Americans are returning to the South in the largest numbers since the first Great Migration, according to sociologists and those who have studied the new migration. During the 1940s, roughly 1.5 million blacks migrated to the North. Between 2000 and 2010, an estimated 1,336,097 blacks moved to seven major southern cities alone, according to the Brookings Institute, which compiled the most recent data from the U.S. Census.

Former magnets for black migrants, including Illinois, Michigan, New York and California, all have had black population declines. Atlanta has even overtaken Chicago as the city with the second-largest black population behind New York City. The black population in Atlanta has grown in the past decade by 473,493. In Dallas it grew by 233,890, and in Houston by 214,928 over the same period. Today, 57 percent of the country's black population lives in the South, a 50-year high, according to the most recent census data.

Today's migrants are chasing the same things their forebears sought decades earlier, according to those who have studied the return migration. Others are retiring or returning to familial homesteads, reclaiming land their relatives never let loose.

"There are places like Harlem that no longer have majority black populations because many of the black folks who have lived there for the last 50 or so years have decided to cash in, and they are going to live somewhere more affordable, places that don't come with the urban baggage that maybe we didn't ever want but put up with because this was our best chance at a solid economic future," said Khalil Muhammad, director of the Schomburg Center for Research in Black Culture, part of the New York Public Library and renowned for its collections of historic artifacts. "Those people are going to places that look just the way they want them to look. They are not going to be shackled by a political nationalism or the segregation of the past."

Meanwhile, Chicago has lost about 181,000 African Americans over the past decade, a drop of 17 percent. Many have fled to the Chicago suburbs. But to a greater extent, who is leaving and where they're going is difficult to determine, according to demographers. But Brookings Institute reports that these new migrants tend to be financially stable and more educated. Many are students, professionals or retirees.

James Middleton, who is 72, and his wife of 53 years, Barbara, have a grown son, now living in Houston, and a granddaughter in Chicago who is considering moving to the South or West, they say -- an indicator of just how much less promise many see in what was once the "promised land" of the North.

"At that time there wasn't a lot of differences between there and here, in terms of the way people took care of their families," Middleton says of Chicago when he first arrived. "It was simple. We stayed with relatives, and other relatives had relatives, so you were always around people that was concerned about you."

"It was a vast difference between how things are today and how things were then," he adds. "Then it was like that saying, it took a village to raise a child. Everyone chipped in, whether they were neighbors or not. Now the professionals, the school teachers ... they are trying to get away."

THE END OF EXILE

During the summers of her youth, Sherry Williams and her siblings relished the trips back "home" from Chicago to Inverness, Miss., where they ran free and spent lazy summer days by the local fishing hole, living, if only for a few weeks, an idyllic country life.

Those connections still run deep in Williams' family and in other families whose roots stretch back to the South.

"For the most part, most of the people who I know that have started to return to the South, their mindset is that they never were Chicagoans," says Williams, 51, who was born in Chicago but whose mother left Inverness in 1942. "They physically lived here, but really, they truly believe the South is home, and that this is just the place that they moved to seeking work and absolutely for the opportunity to vote, attend better schools and just better themselves."

She said that many of the children of those migrants found themselves financially strapped. "But back home, the family has always had that land, that 'heir property' that many people find themselves going to," Williams says. Her family still owns a home and some land in Mississippi, which a revolving cast of cousins has occupied off and on.

Williams' daughter, Joi Tucker, 20, a third-year student at Alcorn State in Lorman, Miss., said she chose to leave Chicago because life is "definitely a lot easier" in the South. She said she plans on staying there after she graduates to attend graduate school and find work there. She says she's "courting" Alabama, Tennessee and Atlanta.

"It's kind of like a sci-fi movie," Tucker says. "You go home and see people just disappearing."

Quinn Chapel A.M.E church is Chicago's oldest black congregation. During the Civil War era it played a pivotal role in the abolitionist movement and Underground Railroad. On a recent afternoon, more than a dozen men and women, many with graying hair, met for Bible study. Many were born in the South, in Mississippi, Georgia or Tennessee.

"Oh, I've seen the change, people moving back," says Dorothy Cunningham, 83, who was raised in Memphis but moved to Chicago with her family when she was 13.

Her church has seen its ranks dwindle amid generational and geographic shifts, as well as the closing of nearby public housing complexes. Cunningham has spoken with family or friends, and she says that they've told her that one downside to moving South is culture shock for the younger children and teens unused to the social mores and the slower pace of life there.

Still, while many African Americans have opted to return "home" to the South, there are still some who intend to stay in the North. They say they have left the Old South behind, and they're unconvinced the New South has much more to offer.

"I left a long time ago," says Mack Sevier, owner of Uncle John's Barbecue, a little no-table joint on the south side of the city. Sevier moved from Augusta, Ark., on May 18, 1962, the day he graduated from high school. "I ain't going back," he says.

Sevier says he found exactly what he was looking for: the opportunity to be his own boss. He occasionally goes back down South, he says, usually to pick up favorite foods, like the southern-grown sweet potatoes he uses to make his pies.

Bronzeville is a South Side neighborhood in Chicago that historians cite as the city's first black neighborhood, founded by former and fugitives slaves in the 1840s. On an unseasonably warm evening recently on Martin Luther King Jr. Drive, Arlander Wade, 63, stood on the sidewalk outside of his recently purchased condo in one of the area's huge, historic "greystone" homes.

He pointed across the street to a parking lot where the Regal Theater once stood, a place where jazz and blues greats once sang or played. The street, running through the heart of historic Bronzeville, once was Grand Boulevard, a gem in the black community and home to people like Robert S. Abbott, the founder of the Chicago Defender, Daniel Hale Williams, one of the nation's first black surgeons, and Oscar Stanton De Priest, the first post-Reconstruction African American elected to Congress.

"It took me 63 years, but I finally made it to Grand Boulevard," says Wade, a retired postal worker whose mother was born in Georgia, his father in New Jersey. "I don't know why people are going. All these young people are moving because they don't know what they have right here. They are hoping for something better, but what they're running from, they're running to. Everyone they saw on 43rd Street last week will be waiting for them in Atlanta by the time they get there. They can have that. I finally made it."

However determined Wade is to stay, he is surrounded by a fast-flowing ebb tide of African-American migrants leaving Chicago behind -- people like Joi Tucker, the Alcorn State University student. 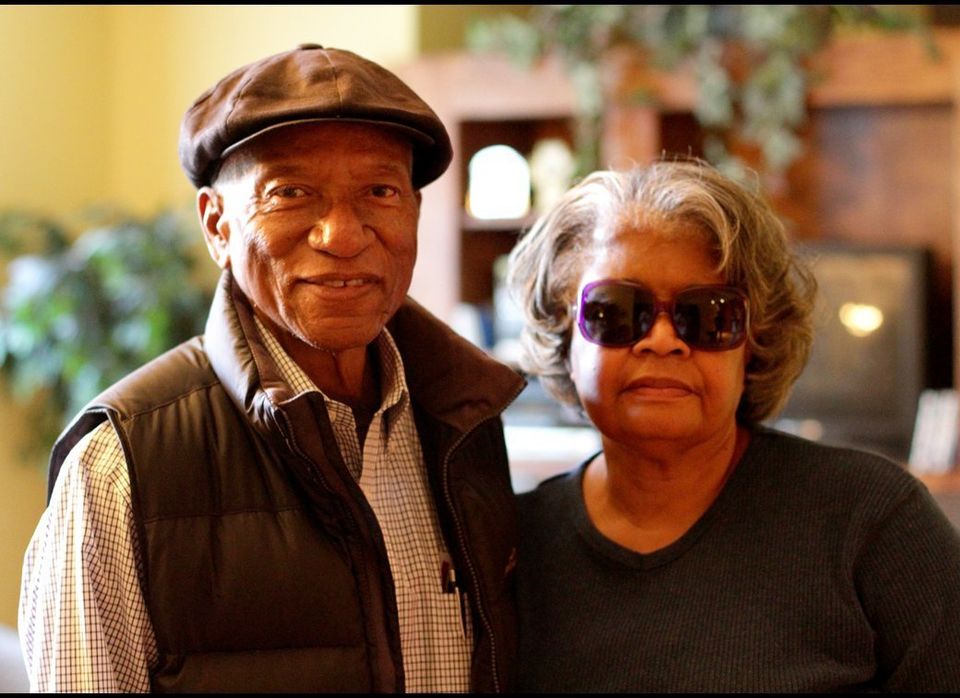 1 / 12
James and Barbara Middleton have been married for 53 years. James Middleton and his family migrated from the small town of Lambert, Miss., to Chicago in 1944, not long after James and his father witnessed the killing of a family friend by a white business owner. Barbara Middleton moved with her family from New Orleans to Chicago when she was less than a year old, in the early 1940s. The Middleton's are among the estimated six million African Americans to migrate to the North from the South between 1915 and 1970, during what historians call The Great Migration. Now, a new generation of northern blacks are headed back to the South in search of new opportunities.