Ousted Illinois Gov. Rod Blagojevich and five others were indicted Thursday on charges of scheming to auction off President Barack Obama's vacant U.S. Senate seat, pressuring a congressman for campaign money and lying to FBI agents. The 19-count indictment alleges Blagojevich and his aides discussed the possibility he could get a Cabinet post in the new president's administration, substantial fundraising assistance or a high-paying job in exchange for the Senate seat.

(Scroll down to read the charges)

Obama's deputy press secretary, Josh Earnest, said the White House would not comment. The indictment does not allege any wrongdoing by Obama or his associates.

Prosecutors also accused Blagojevich and members of his inner circle of scheming to line their pockets with millions of dollars in ill-gotten gains, squeezing contractors, hospital owners and others seeking state business for kickbacks they planned to split after the governor left office.

"I'm saddened and hurt but I am not surprised by the indictment. I am innocent," Blagojevich, who was at Walt Disney World with his family, said in a statement. "I now will fight in the courts to clear my name. I would ask the good people of Illinois to wait for the trial and afford me the presumption of innocence that they would give to all their friends and neighbors." (Scroll down for video of a Florida news reporter who found Blagojevich and his wife inside Disney World after in the indictment.)

The indictment alleges that Blagojevich:

_Told an aide he wanted to stall a $2 million state grant to a school supported by a congressman until the lawmaker's brother held a fundraiser for the governor. The congressman's identity wasn't released.

_Was involved in a corrupt scheme to get a massive kickback in exchange for the refinancing of billions of dollars in state pension funds.

_Told an aide he didn't want executives with two financial institutions getting further state business after he concluded they were not helping his wife get a high-paying job.

_Withheld state aid sought by the Tribune Co. unless the company fired unfriendly editorial writers at the Chicago Tribune.

Also, convicted fixer Tony Rezko paid Patti Blagojevich a $14,396 real estate commission "even though she had done no work" to earn it and later hired her at a salary of $12,000 a month plus another $40,000 fee, the indictment said.

"We were hoping that it wouldn't happen but now we go to trial and win," said his attorney, Michael Ettinger. 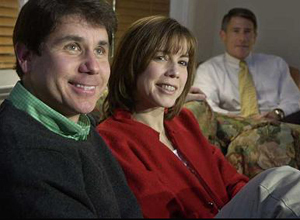 Cellini attorney Dan Webb said his client never had a substantive conversation with Blagojevich, much less conspired with him. Messages were left for attorneys for Monk, Kelly and Harris.

Blagojevich faces 16 counts of wire fraud, racketeering and extortion conspiracy, attempted extortion and making false statements. Most of those charges carry a maximum sentence of 20 years in prison and a $250,000 fine.

One of the targets of the alleged extortion plots was Obama's chief of staff, Rahm Emanuel. In 2006, as the Congressman from Illinois' Fifth District, Emanuel sought a $2 million grant for a school, according to attorneys familiar with the case. Blagojevich allegedly told a lobbyist to tell Emanuel that his brother would have to raise campaign funds or the school would not get the money.

Prosecutors said at least $188,370 belonging to Friends of Blagojevich is subject to forfeiture. If the money can't be found, Blagojevich might have to forfeit his Washington, D.C., apartment and Chicago home.

Blagojevich, 52, was arrested Dec. 9 on a criminal complaint and U.S. Attorney Patrick J. Fitzgerald had faced a Tuesday deadline to supplant it with an indictment handed up by a federal grand jury. The Democrat's arrest led to his political downfall: The Illinois House impeached him Jan. 9. The Senate convicted him and removed him from office Jan. 29.

Illinois lawmakers had considered stripping Blagojevich of his Senate-appointment powers after his arrest, but couldn't agree on legislation. Blagojevich shocked everyone by naming former Illinois Attorney General Roland Burris to the seat Dec. 30.

Burris has since come under fire for changing his story about the circumstances surrounding his appointment. He also acknowledged trying, unsuccessfully, to raise money for Blagojevich.

Burris would not comment on the indictment, spokesman Jim O'Connor said. Earlier in the day, Burris told reporters with The Hill as he came off the Senate floor that it "has nothing to do with me."

Burris adviser Delmarie Cobb criticized Democratic leaders for what she felt was their attempts to tie Burris to the Blagojevich indictment:

"To the extent those goals [of having Burris resign] have not been met, the Democratic leadership can blame its own tainted motivations," Cobb's statement said. "They have tried their best to discredit one of the few 'clean' politicians Illinois has ever known, in order to do exactly what Blagojevich warned against."

Illinois' senior Senator, Dick Durbin, says he hopes Blagojevich will not undertake another media blitz like the one that followed his arrest and subsequent impeachment.

Blagojevich's administration has been under federal investigation for years and Kelly and Rezko already have been convicted of federal crimes and are awaiting sentencing.

Thursday's indictment said that in 2003 -- the former governor's first year in office -- Blagojevich, Monk, Kelly and Rezko agreed to direct big-money state business involved in refinancing billions of dollars in pension bonds as part of a deal with a lobbyist who promised a massive kickback in return. The lobbyist wasn't identified.

Rezko raised more than $1 million in campaign contributions for Blagojevich and also was a major Obama fundraiser.

Illinois residents said they were tired of the corruption.

"I'm so disgusted," said Linda Dowdy, a 59-year-old Belleville tavern manager who calls herself a hardcore Democrat. She lamented that even well-intentioned politicians don't last long in office.

"He may have every intention of going in and trying to change things and of making things better," she said. "But once he's in, he doesn't have any choice but to be as crooked as they are or he's not gonna stay in there."

See a timeline of Blagojevich's career as governor here.

Read the full release, with details of the charges, from the U.S. Attorney's office: