If his appointment is not rejected, Roland Burris will be the first Orphan to hold a Senate seat. The Centralia Orphans are the sports team in the small Southern Illinois town we both grew up in, and chants of "O-R-P-H-A-N-S Orphans, Orphans, we're the best" bring back high school memories. When the kerfuffle over whether American citizens could be known as refugees arose after Hurricane Katrina I was comfortable with it, but most of the other displaced New Orleans residents didn't wear Orphan Pride shirts in high school.

Our girls teams were the Orphan Annies, and their logo's big hollow eyes were hard to adjust to on the basketball court. 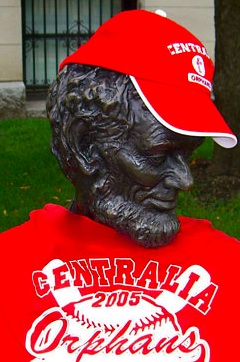 It would be stretching a metaphor to speculate that the former Illinois Attorney General's years as an Orphan gave him the intestinal fortitude it's going to take to hold out as a hostile Senate tries to overturn his appointment at the beginning of Governor Rod Blagojevich's very bad year, but having a pejorative turned into a positive was an early lesson in life's ups and downs.

What kind of team gets called a raggedy bunch of orphans in the great depression and decides it would be a great team name? As it turns out, we are the winningest high school basketball team in the country.

Harlem Globetrotter Bobby Joe Mason was an Orphan and as a child, before I understood that the games were for show, I rooted for the poor old Washington Generals who never won a thing while the Globetrotters flew around the court making trick shots.

It's probably going to take a real sportswriter to wring much more out of an embattled Orphan fighting to keep an appointment, but the image is hard to shake. The other famous Orphan is James Brady, the White House Press Secretary who took a bullet aimed at President Ronald Reagan and now lobbies for gun control. Above is an Illinois Lincoln statue sporting my high school team's tee shirt, and for old time's sake Go Orphans.