It's all still there. More or less. Battered by several hellacious hurricanes over the last few years, our Gulf Coast has picked itself up, repeatedly, dusted (well, toweled) itself off, and picked up the pieces. The good folks living in the bayou belt from Mobile to Galveston have had a rough time of it, but their attitude, by and large, is that it comes with the territory. California has earthquakes, the Midwest has tornadoes, the Nor'east has nor'easters (even as late as Easter), the Delta (and Florida) have 'canes.

It wasn't my primary intent to check up on post-hurricane art in Louisiana, but, even half a decade on, when you go there, you look for what was left standing and what has been replaced. Native curiosity is only piqued by the strange footprint Katrina left on New Orleans, a footprint that has filled in, or not, neighborhood by neighborhood. When mounted two years ago, Prospect 1, the region's first international biennial exhibition, wisely emphasized rather than papered over Katrina's wake, playing not only on New Orleans' artistic traditions, but on the spectacle made of the city by nature - and by humankind's struggle to endure. Seeming to make an artwork of the entire Lower 9th Ward, what Prospect really did was point out how Katrina had done so. (Originally scheduled to recrudesce this coming fall, Prospect 2 has been delayed until 2011.)

New Orleans' art scene came back relatively quickly; although any number of artists were badly affected, losing homes, work, documentation, and the like, their supporting institutions - museums, galleries, etc. - fared surprisingly well. Most are located on relatively high ground and/or prepared well for the worst. (I was told a dramatic story about employees of the New Orleans Museum of Art taking refuge with their families in the redoubtable beaux-arts pile and being rescued by the National Guard, but apparently little art was lost.) The Central Business District gallery scene, compact and relatively upscale, bustles as it did before the storm (although, as everywhere, the recession has had a bit of a slimming effect). The new flower in the waters' wake blooms over in Marigny-Bywater, the funky stretch of low-slung commercial and residential buildings lying east of the French Quarter. This working-class nabe, crossed by streets called Independence, Arts, Music, and, yes, Desire, has become Nawlins' Bohemian quarter, and artist-run galleries have emerged along St. Claude, the district's main drag. Prospect gave the Bywater scene a boost; there still aren't many galleries, but, rough-hewn as they are, they are now viewed as local barometers on a par with their grown-up CBD counterparts.

During my visit, the galleries in the CBD and in Bywater were, as usual, concentrating on local and regional artists; New Orleans can always be counted on to support its own, no less in visual art than in music. At the moment, the "region" includes Cuba, or at least its spirit. (Nawlins' affinity for Caribbean cultures is understandably greater than is its affinity for most other Southern culture.) In the atrium of the New Orleans Museum hung (but, alas, hang no longer) the latest paintings of Luis Cruz Azaceta, marrying geometric line and rhythm to an almost surrealist intricacy and intimacy, harried little figures popping up in the midst of what seemed like dazzling, nightmarish architecture. The Ogden Museum of Southern Art hosts José Bedia's drawing-installation and Jorge Otero's photographs of Miami (thru April 11; 925 Camp St., www.ogdenmuseum.org), along with the ceramics of Mario Petrirena, whose collages, meanwhile, lurk in the back of the Contemporary Art Center across the street (thru April 11; 900 Camp St., www.cacno.org). Also at the CAC, ubiquitous HuffPost big man on campus Harry Shearer, an honorary native New Orleanian if e'er there were one, has installed a nine-monitor presentation, called The Silent Echo Chamber (thru June 6), of his ongoing "found objects" captures - political and media figures seen not on the air, but just before, as they prepare themselves for broadcast.

New Orleans, you should remember, did not take the brunt of Katrina's wrath, only of its blowback. The hurricane made landfall east of town, ripping apart the Gulf shore of Mississippi - including Ocean Springs, a charming suburb of Biloxi with a notable artistic bent. A lot of real estate disappeared in the storm, and where it once stood now stand either remnants (a shack, a staircase) or replicas. The museum dedicated to Ocean Springs' favorite artistic son, Walter Anderson, apparently went untouched. (The Shearwater Pottery complex that Anderson founded and his family now runs was devastated but has been rebuilt.) Anderson's vision - and vision it was, given the man's mercurial mindset - embraced nature and human history in equal measure, and likewise incorporated almost the entirety of western and non-western art. His stylized renditions of representational subjects often border on abstraction, but evince even more a knowledge - a very hungry knowledge - of everything from Aztec to Tibetan to Minoan to Medieval art. The current show at WAMA, "The Lost Murals: The Art of Reading" (to May 15; 510 Washington Ave., www.walterandersonmuseum.org), shows Anderson responding to literary sources, from Milton to Homer to the Bhagavad-Gita, in many media, but particularly in wall painting. The murals are described as "lost" because most of those that survived disintegration over the years were indeed destroyed by the hurricane, so their fragments comprise the heart of the show. Happily, the murals with which Anderson covered the walls of the adjacent Community Center are intact and viewable - as is "The Little Room," the cabin room he covered in painterly detail out on "his" island in the Gulf, now reconstituted in the museum.

With its unself-consciously quaint domestic and commercial architecture (still a lot left, especially away from the bay) Ocean Springs reminded me of a typical town in upstate New York, crossed with Lafayette, the bustling little city at the heart of Louisiana's Cajun country. About as far west of New Orleans as Ocean Springs is east, Lafayette, too, is as juicy an art town as it is a destination for music or food. The anchors are the University of Louisiana's Paul and Lulu Hilliard Art Museum (710 East St. Mary Blvd., www.museum.louisiana.edu), with its gleaming, airy new building, and the Acadiana Center for the Arts (101 W. Vermilion St., www.acadiancenterforthearts.org), expanding even as I write. I was surprised to find a show - a very good show - of contemporary Chinese art at the Hilliard (thru May 1). It seemed a bit incongruous to find Chinese art in the middle of the bayou (but what the hell; it was in Baton Rouge that I discovered the best topping for grits is soy sauce). What startled me, however, was how much I came to understand about Chinese post-modernism through "East/West Visually Speaking." The show includes work by 13 artists ranging across several generations, all resorting to appropriated imagery, Pop-ish references and figural tropes to make elaborate, but not at all obscure, commentary on social and political conditions in and around their rapidly changing universe. 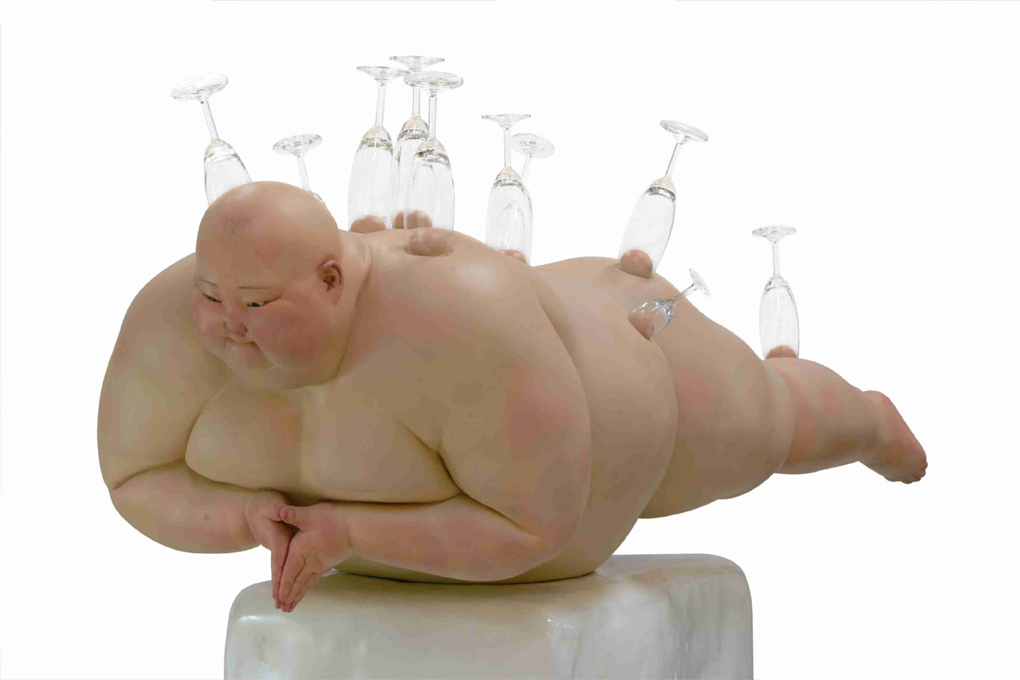 There is little sign of the decorous, self-conscious surrealism or expressionism that often "brands" such work out of China; rather, the artists concentrate on image and meaning, hewing closer in their visual urgency to the best Newbrow art or even Mexican modernist mural painting. Arch or clever as its commentary can get, this work is remarkably, and refreshingly, snark-free, and for once seems produced for a discourse rather than a market. For the record, the artists included are Cai Lei, the three Luo Brothers, Ma Baozhong, Mu Boyan, Shen Jingdong, Shi Liang, Song Yongping, Sun Ping, Tang Zhigang, Zhang Hongtu, and Zhong Biao.
My excuse for this whole excursion was to judge a work-on-paper show at McNeese University in Lake Charles, tucked into Louisiana's southwest corner, and closer to Houston than to New Orleans. Not quite the charmer Lafayette is, Lake Charles is still an endearing Louisiana combination of grace and funk, and seems also to treat its artists with admiration and deference. Nowhere exudes more Lake Charles charm than its Imperial Calcasieu Museum (204 W. Sallier St., www.imperialcalcasieumuseum.org), a little hall brimming with tidily organized historical bric-a-brac. There are a gajillion such places in this country, but this one feels more seriously tended than the usual VFW Hall vitrine-display, you do learn about the city and the region, and the Sallier Oak sprawls gloriously throughout its backyard.