WBC also released a parody of Shelton's song "Boys 'Round Here," featuring choice lyrics like "Well the boys 'round here don't read much Bible / Chasing tail and waving flags of their idols / At the honky tonk, where the whores romp," which get progressively worse as the song goes on.

Despite the stunning failure of their recent protest at a Ke$ha concert, the Westboro Baptist Church is at it again, announcing its intentions to picket the next performance of The Voice judge Blake Shelton on October 3 in Kansas City.

In characteristic fashion, the Westboro Baptist Church has been furiously tweeting accusations and slurs at Shelton, accompanied by the declaration, "We know BS when we see it!"

According to WBC's logic, Shelton's divorce from his first wife Kaynette Williams and subsequent marriage to Miranda Lambert makes him "a vulgar adulterer," which is why gay marriage is now legal in some states.

Hey @WBCSays.. This isn't about God. It's about me using this opportunity to make y'all look like the absolute complete dipshits you are.

Shelton isn't the only country star that the WBC has gone after in recent weeks. They set up a protest outside of iconic country star Vince Gill's concert on September 8 to harass him about his divorce and subsequent remarriage.

"Don't you know that divorce plus remarriage equals adultery?" asked one of the picketers. "Jesus Christ said that."

"Did he?" Gill responded. "You know what else he said? He said a lot of stuff about forgiveness, about grace. You guys don't have any of that." 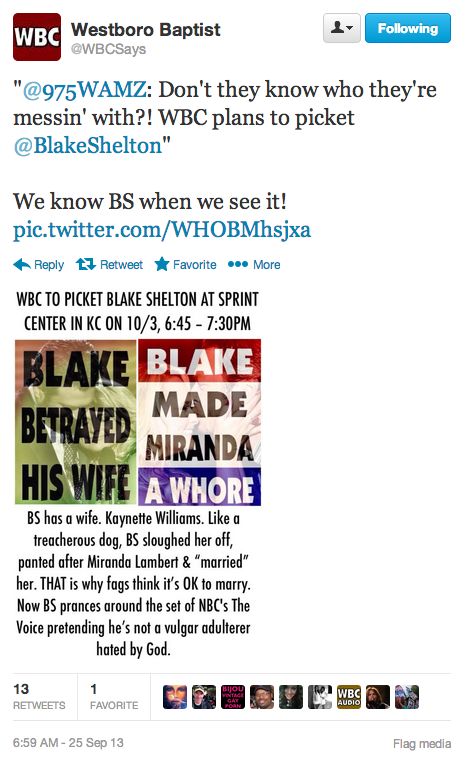 1 / 16
Cory Monteith
The Westboro Baptist Church announced on Twitter Sunday morning that they will be picketing "Glee" star Cory Monteith's funeral. Monteith was found dead in his hotel room Saturday, July 13, after the staff realized he had missed his checkout time. He was 31 years old. <a href="https://www.huffpost.com/entry/westboro-baptist-church-cory-monteith_n_3598346" target="_blank">Read more here</a>