Blanche Lincoln's campaign hit a bit of a snag today when it momentarily forgot that she'd requested an absentee ballot in advance of today's primary election. That meant that when she showed up to vote at her polling place, things didn't go quite as she had planned. Here's Evan McMorris-Santoro:

Lincoln didn't fill out the absentee ballot this time, her staff no doubt eager for the classic casting-the-ballot photo op this morning. But, thanks to this mix-up, she's stuck with the less appealing "filling out the provisional ballot so elections officials can determine if her vote is legal or not" shot instead.

The Lincoln campaign tells McMorris-Santoro that the senator asked for an absentee ballot in the event that she'd be called to vote in Washington, and that she was "happy to cast" a provisional ballot today.

CNN's Dana Bash was on hand to catch this frozen moment, and dutifully reported it on Twitter:

Lincoln coming 2 vote but - oops - polling place says she already voted. Her camp says its a mix up. Requested absentee. Didn't fill it outless than a minute ago via OpenBeakDana Bash

Bash also provided this picture of the voter rolls, which have Lincoln as having already voted, by absentee. 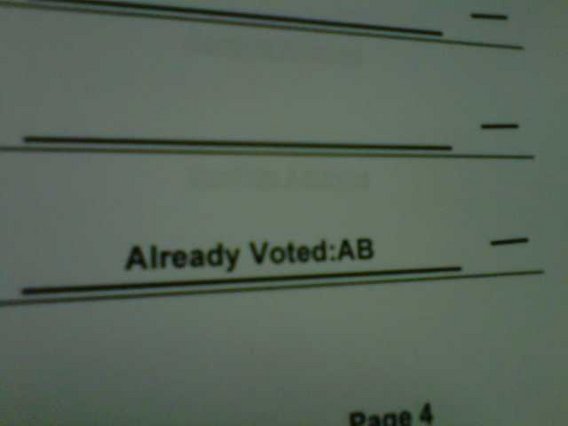 Obviously, if Lincoln gets pushed into a runoff election, she'll get to try this again.