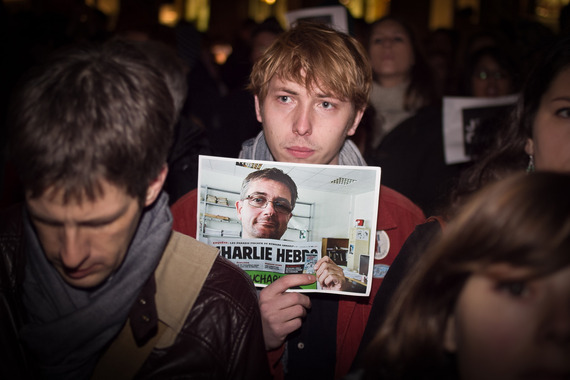 Those [of us] who are expected to monitor religious trends have reason to find talk of blasphemy a complex challenge to commentators and responsible citizens.

Islam is an international supplier of reasons for pondering and arguing themes associated with blasphemy. Most terrorism by factions in or at the edges of the Islamic world(s) is usually occasioned by fanatics who act in defense of Allah against heretics, the religious "other," and "infidels" who are seen or claimed to be blasphemers.

Is it time to rethink blasphemy?

The dictionary can be succinct: blasphemy is radical irreverence or disrespect shown to that which is sacred, holy--especially when deity is involved. But the borderline between hard-core blasphemy and mere irreverence is blurry, and often seen by "the eyes of the beholder."

This week's New Yorker prompted reflection on the borderline. Was it crossed or only tip-toed-toward in Simon Rich's piece, "Day of Judgment" (January 8), illustrated by a Jesus-looking figure gesturing past a score of microphones to an unseen audience.

Irreverent to the core, yes: but was it blasphemous? The star of the article is named "the Messiah," a proper name in Judaism and Christianity alike.

Regulars on the scene know that there have been and are "false Messiahs" in Judaism, Islam, and Christianity. They can be found by the dozens, of course, in Wikipedia. But Simon Rich's "Messiah" is a befuddled "real" Messiah who confuses Al Sharpton with Al Roker, and can't keep apart the biographies of Malcolm X and Martin Luther King Jr.

This Messiah came from heaven to announce and effect "salvation" and other good things, but the crowd goes silent and embarrassed cherubs pull him back to heaven. The piece was well-aimed satire but was it blasphemous? Did the New Yorker get any critical letters?

Wasn't the Vatican doing its job by protesting a violently demeaning and profane "God" on the cover of the notorious Charlie Hebdo? Was Saudi Arabia's censorious government weirdly out of line by banning the naming of boys "Benjamin" by Saudi parents, no doubt because it has been corrupted by "Benyamin," as in Netanyahu? Etc. Etc.

We confess to having sometimes enjoyed borderline blasphemies on late-night television and in other media. Taking on sacred cows can in some ways be good for "the sacred" and, for that matter, for figurative "cows." In another column we might speak of the values of "sacred irreverence" in a culture where Culture War partisans are too sure of what is blasphemous.

In today's column let's at least entertain the idea that the New Yorker and satirical magazines like Charlie Hebdo, if and when they cross the line with profane depictions of the Deity--as conceived by devout, ethical people in the great faith communities--help breed cynicism, relativism, or pseudo-tolerance to the point that being in awe of the "Sacred Other" is forgotten.

What if reverence toward God and standards of respectful human communication are irretrievably lost? And what if awe and reverence are lost at a time when some sense of the Holy in the religions, toward nature and in human interactions, merits retrieval?

Here's to "awe" in an often aw-ful civilization.

Image: A gathering in Brussels held in solidarity for the attack in Paris on Charlie Hebdo, Jan. 7, 2015. Pictured is Charb (Stéphane Charbonnier), cartoonist, columnist, and editor-in-chief of Charlie Hebdo, who was killed during the attack. Credit: Valentina Calà / flickr creative commons.