Last month, an African lion known as Cecil was lured out of a protected area and killed by a high-paying sport-hunter, igniting unprecedented worldwide outrage over the killing of a free-living animal. Earlier this month, a grizzly bear known as Blaze (after a light-colored marking on her flank) was killed inside Yellowstone Park. The reasons differ; Blaze killed a hiker. At the time, Blaze had cubs with her. Park authorities killed Blaze. Her cubs will go to a zoo. You can see photos of Blaze with an earlier cub here. Here are my thoughts:

No serious person trivializes the tragic loss of the hiker. Killing the bear, though, could not bring the hiker back. Nor does killing Blaze ensure safety for hikers; there are other bears with cubs in Yellowstone. The Park administrators must have had liability on their minds; if the same bear hurt someone else: lawsuit. But we can have safe hiking and we can keep bears safe: where bears live, the Park Service should require hikers to carry bear spray.

Grizzlies with cubs can be unpredictable, anywhere from mellow to murderous. I've back-packed in Yellowstone and hiked in heavy bear country in Alaska where I frequently saw bears, and in British Columbia watched mother grizzlies with cubs on a shoreline at very close range from a small boat. In the two cases where I most closely observed mothers with cubs, the mothers were preoccupied with concern about male bears--which sometimes kill cubs. They weren't concerned about us. 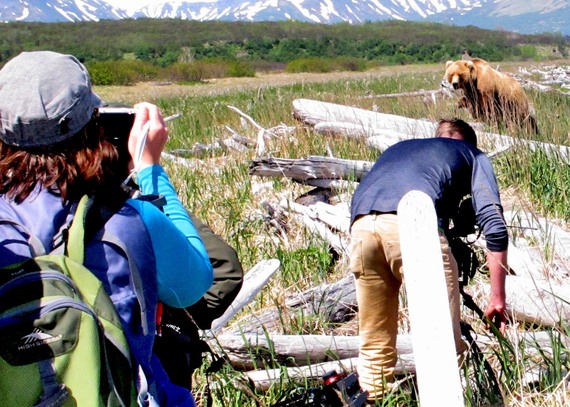 Mother bringing cubs to where we are gathered. Photo: Carl Safina 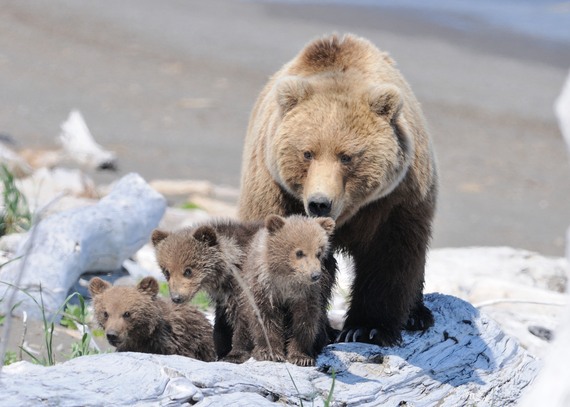 Right onto the log I'm sitting on. Photo: Carl Safina

In the case while we were in the little boat a few yards from shore, the mother--who was well-known by our guide--had detected a male somewhere down the beach and was highly vigilant about him, not us. In the other case, I and about a dozen colleagues watched as a mother with three cubs traveled about a mile on an Alaskan tidal flat to get away from a male. When the male disappeared into high sedges, the mother brought her cubs onto the log I was sitting on, apparently because she felt safer in a crowd of humans than out in the open on her own. In that case, being close to us actually seemed to let her (though not all of us) relax. 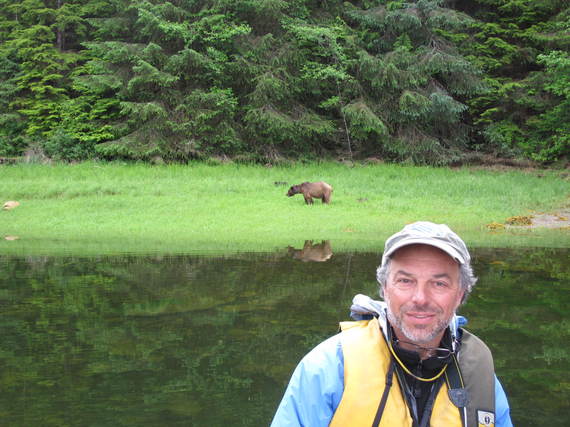 Her attention is ahead, not on us. Photo: Carl Safina

When we go into bear country, we know that a mother bear's main concern is her cubs' safety. Leaving the safety of our cars (to the extent that driving is "safe"), we know we are trading the risks of traffic for bears and other risks. I and many others would say this: I would never want a bear who killed me to be killed, and I'd gladly sign waivers stating so. I would not trek into bear country without pepper spray; that's my responsibility to myself, my family, other hikers, administrators--and the bears.

That the man hiked in bear country, and alone, was his choice. That he hiked without pepper spray was his fault, putting himself and the bears at risk. I mean no disrespect to him or his family when I point out that fully understanding the importance of being properly equipped can potentially save more hikers than can killing a bear after a hiker is killed. Here's the story of one couple and how they survived what would have been an ugly attack by a charging mother grizzly because they carried pepper spray--and had practiced using it. Their competence saved them--and the bear and her cub. 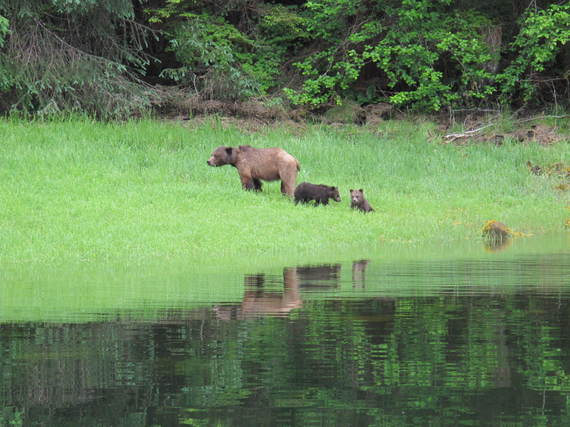 Worried about a male, not us. Photo: Carl Safina

Photographer Amy Gerber watched Blaze for years. She was quoted as saying: "She raised five litters of cubs along the road... where [males] won't come. ...You watch the way she raised her young, watch her with her babies - She's a great mother and she's an amazing bear," said Gerber. "Thousands upon thousands have seen her and taken her picture over the years. She's that bear that is like the ambassador for everything good... This is a bear that co-existed for 20 years with people and [had]... never shown aggressive tendencies. She's never been a problem."

So, where does this lead? Yellowstone is a park. Parks are managed for people. But people go to Yellowstone for nature and wildlife, and in a shrinking world Yellowstone is crucial wildlife habitat. African parks generally do not allow people on foot at all. If we want people to risk only auto-injuries and not wildlife injuries, we too could also keep everyone in our cars. But many of us want a deeper, more intimate experience. Yet all of us prefer to come out alive.

Luckily there's a way for us to have it both ways: be properly equipped. Poorly equipped people spread their risk to bears. Then when there's an incident, it forces other people to make sad decisions. Killing a bear known as a great mother, who'd felt protective about her cubs, has multiplied this recent Yellowstone tragedy.

It doesn't have to be this way. The simplest answer is: the Park Service should require all hikers in bear country to carry bear spray, and strongly advise people not to be alone. If that were the policy, fewer people and fewer bears would die. Win-win. Simple enough.