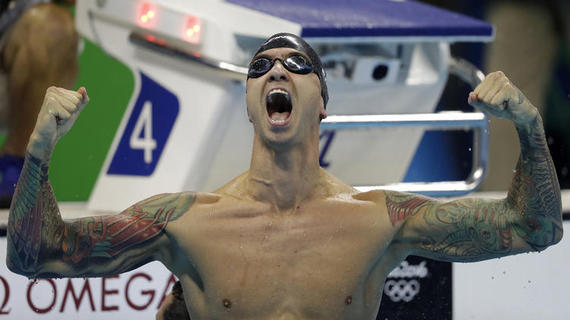 U.S. Olympic swimmer Ryan Lochte brought national shame after he made up a story about being robbed at gunpoint in the streets of Rio, which perpetuated the racially charged, violent imagery of Brazil and the rest of Latin America. Now the facts are clear that Lochte took a drunken piss behind a convenient store with three teammates, participated in some minor vandalism of the building, and then argued with store security about having to pay for damages.

Lochte says he wants to get rid of his "drunk frat boy" image and be a role model. This will be difficult when his actions epitomized the "ugly American" stereotype, where people from the U.S. show contempt and disrespect to anyone born outside of the country.

While Ryan Lochte is an easy target, his actions are emblematic of a larger colonial mindset that has a long history of "white privilege" and upholding systems that support Anglo-conformity and the blanquemiento (whitening) of American society.

Lochte's hair wasn't the only thing bleached in Rio.

Both Brazil and the United States share histories of "whitening" their populations and bleaching people's cultures. Unfortunately, mainstream media was not able to navigate this history of colonization and instead continued to perpetuate these themes at the games in Rio. Journalists missed chances to adequately explore the diverse stories of many U.S. Olympic athletes, like Anthony Ervin, among others.

Racial Whitening: Branqueamento/Blanquemiento
Rio's Olympic opening ceremony adeptly included the story of Brazil's contentious beginnings. It featured Indigenous peoples of South America, who have lived in the region for thousands of years, along with sixteenth-century Portuguese explorers/invaders and the Africans they imported into Brazil as slaves over the next four centuries. (It's no coincidence that Brazil has the largest African-descended population outside of Africa.)

While Brazil's leaders still bear responsibility for current massive inequalities, its theatrical representation of its colonial past was the first time a country showcased such a difficult history on the international Olympic stage.

One can hardly imagine a U.S. Olympic city accurately depicting our troubled colonial origins at an opening ceremony. As a nation, we still have not adequately dealt with the dispossession of Native American lands, African American slavery, or the continuing issues concerning the modern-day subjugation of these and other groups.

Brazil and the United States not only share similar colonial beginnings, but they also were two of many countries in the Americas that actively participated in attempts to "whiten" its population (branqueamento in Portuguese). From the late-1800s into the greater part of the twentieth century, both national governments promoted European immigration as a means to lighten the country, while also relying on racial quotas to prohibit people of color from entering their borders.

Cuba is another nation on the list that practiced blanquemiento -- home to Ryan Lochte's mother Ileana.

Who benefits from the Olympics?
One of the ironies behind the Lochte fiasco in Rio is that he's actually of mixed Latino heritage: his father is Euro-American and his mother is Cuban American. While many are angry over Lochte's lies about being robbed in Rio, others are upset about his lack of representing his Cuban heritage. (Some also point out he's had no problem appropriating culture.)

Lochte would have benefitted from a few lessons about the historical and present struggles of Latin America and the importance of the first games in South America. We all could have, but few news stories covered the sharp class and racial divides in Brazil in detail.

While Brazil deserves credit for hosting an exciting Olympic games, their leaders also earned critique for building walls to hide favelas (slums) and locking out the poor from those games.

Part of the reason there were so many empty stadium seats in Rio was because poor and working class people could not afford to go. Also, many protested the diversion of funds away from education and other social services, which went towards hosting an Olympic games that did not benefit them.

NBC was much criticized for their delayed broadcasts, sexism, and made-for-TV stories that hyped up a few selected athletes while ignoring others. The other gaping hole in the coverage was addressing race in meaningful ways.

Talking Race in Rio
Admittedly, it can be difficult to talk about race and other inequalities in sports. Olympic reporters did highlight the groundbreaking achievements of Simone Biles in gymnastics and Simone Manuel as the first African American female gold-medal winner in swimming. And granted, many athletes want to be known for their accomplishments as individuals, not their skin tone.

Still, too much silence can be a failed opportunity. Skilled journalists should be able to distinguish between oversimplifying someone's race and tactfully exploring the importance of an athlete's ethnic identity and their family's cultural heritage.

Take for example the tri-captains for men's 2016 USA swimming. Next to co-captain Michael Phelps were Anthony Ervin, who is Jewish and African American, and Nathan Adrian, who is of European and Chinese ancestry. Mainstream media clearly failed to explore their diverse ethnic backgrounds.

After being inducted into the Asian American Hall of Fame in 2014, Adrian said: "It has always been important to me to remember both sides of my cultural heritage and hopefully inspire young individuals to be the best at whatever it is they choose to do."

The general silence by mainstream media on the stories of Adrian, Ervin and other athletes of color ignores that these Olympians can serve as role models for various marginalized groups. It also allowed some mixed-heritage athletes to racially pass or pushed their perception as "white," thus continuing the idea that ethnic mixture is good because it can lead to whiteness.

Chasing Water
Aside from Olympic swimmer's Anthony Ervin's mixed heritage, his story is an amazing comeback tale. In the 2000 Olympics, he won gold at age 19 and a couple years later he retired from competitive swimming. Ervin later donated his medal to victims of the 2004 tsunami and was gone a decade before coming back in time for the 2012 Olympic games.

Although Ervin did not medal in London, at age 35 he became the oldest Olympian to win gold in swimming at Rio. Repeating his achievement of 16 years prior, Ervin placed first in the 50-meter freestyle and was once again the fastest sprinter in the water.

When he won the gold in 2000, the media was not well prepared to speak with Ervin about his background. Right after the race, the announcer first asked him about his Tourette's syndrome and then what it felt like to be the first African American to win Olympic gold.

At the time, the questions troubled Ervin. As a light-skinned African American of mixed ancestry, he admittedly didn't understand how reporters wanted him to talk about his "black experience." He later said: "It's like winning gold and having a bunch of old white people ask you what it's like to be black. That is my black experience."

Though Ervin has spoken about his mixed heritage, he has also worked to shed stereotypical forms of identity and dislikes being categorized. This doesn't mean that Ervin avoids claiming his heritage or speaking out against injustice.

In his memoir, Chasing Water, Ervin acknowledges that while he is African American, society does not necessarily see him as "black." For example, he notes that "cops kill black people" at disproportionally high rates, but Ervin also recognizes that he is not targeted by police brutality because his physical appearance has allowed him to racially pass as "white."

This is an example of an athlete that has "white privilege," yet uses it to inform others on larger issues. In short, we need to spend more time engaging the complex stories of athletes like Ervin and less on those like Lochte.

Bursting the Olympic Bubble
It has been easy to criticize Lochte instead of going after a Rio Games that systematically supported "white privilege" within an Olympic bubble that excluded so many Brazilians. It's much easier for us to blast an individual for accepting the advantages that come with whiteness and much more difficult to pinpoint where the incentives come from and combat them.

Lochte's misdeeds encapsulate a perfect example of how race, class and male privilege work in society, while revealing the colonial mentality that remains between the U.S. and Latin America. These screw-ups will be punished through the loss of endorsements and reprimand from USA Swimming. Does this signal change?

Having this conversation is extremely important to addressing issues of inequality in the U.S. and overseas. Where mainstream media, our schools and other institutions hide from openly talking about race (as well as class and gender), we need to step up and be brave enough to discuss these issues, even if difficult.