Born in Albania on August 26, 1910, Anjezë Gonxhe Bojaxhiu, later known as Mother Teresa, devoted the majority of her life to serving India. After joining the Sisters of Loreto as a young woman, Sister Teresa traveled to India and worked as a teacher at a convent school for twenty years. Grieved by the continuous religious violence, rampant poverty and widespread starvation of India, Sister Teresa left the school for the Calcutta slums, where she vowed to care for the poorest of the poor.

During the first year, Mother Teresa and her small group of followers struggled to find food and supplies and were often forced to beg for basic necessities. In 1950, she founded the Missionaries of Charity and, fifty years later, was operating more than 500 charities, hospitals and orphanages in over 100 countries. Throughout her long life, Mother Teresa brokered cease-fires, ventured into Communist countries, met with Pope John Paul II and rescued thousands of Indians from poverty, sickness and starvation. She passed away in 1997, mourned by secular and religious groups alike, especially in India, her adopted home. 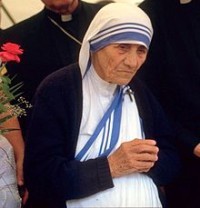 The following interviews done by ADST with Leila Wilson, Alice Pickering, and Mary Louise Weiss, chronicle three different perspectives of the famous nun, her works and her ceaseless devotion to the poor. You can read the entire account on ADST.org WILSON: It turns out that we were the first people who raised money publicly for Mother Teresa in 1952. We had an American Women's Club. There weren't very many members. Most of us belonged to Indian groups that we spent more time with than with the Americans. But it was a way to draw together Americans who otherwise felt excluded from the activities of the Consulate General. Similarly, my husband made a great point of playing golf with the American businessmen, so there was a sense of community and cooperation between them. That small women's club sponsored our group that went to the orphanage and did other things as we saw necessary. We decided at one point that we really should do something to raise money for Mother Teresa.

We were there from 1951 to 1953 and we put on a bazaar to raise money for Mother Teresa in 1952. The important point was that it was the first time that anyone ever had raised money for her publicly. She had been supported by the church and communicants before that. It was through a Roman Catholic friend that I had met Mother Teresa and gone around with her on her rounds through the backstreet busti, the worst slum areas, of Calcutta.... a view that gave me nightmares for a week....

But it was that that convinced me that here was something we could do, no matter how little money. We only raised about $3,000, but it was a fortune as far as she was concerned. We thought we'd done pretty well, because it was a bazaar participated in basically by Indians. We had silly games of chance, we had dancing, we had people who sang and people who ran booths of entertainment so that there was something for everybody to do, and of course food.

I was the head of the club, and there was a group of us who kind of fought our way through. There were those who thought we should not support Mother Teresa, because she was not Hindu. Anyway, it was argued out, and we decided to do it, because it was Hindus, Moslems -- anybody who was dying and in terrible shape, leprosy and cholera and typhoid and tuberculosis patients -- that she was ministering to day-by-day and running little schools of sorts for their children.

Q: Did she already have a reputation beyond the people for whom she cared?

WILSON: No, really she didn't. The Indians were a bit embarrassed, because she was taking care of people they knew in their hearts they should be taking care of, and she was not one of them. She's an Albanian. She's a Roman Catholic and she had been teaching in a sophisticated school for Indian girls in Calcutta. She decided she had to leave that way of life and devote herself to those who were totally poverty stricken and totally helpless and hopeless. She could at least give them love and hope, and it was a pretty emotional thing to go around and see what she was doing and accomplishing with just plain nothing. 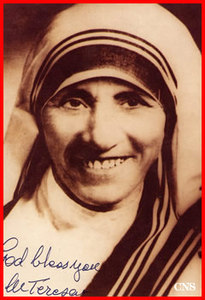 Q: How long had she been involved in this kind of activity at the time?

WILSON: Well, I read when she was given the Nobel Peace Prize, the Award for International Peace, and when later she was decorated by the Pope....[I]t was in 1952 that they talked about her starting her mission. She must have been working at it for a year or so preparing something, and they had a very simple house, minimal rooms, minimal equipment, just running water. I think they had electricity, but nothing elaborate whatsoever. But it was organized, and she had six or seven nuns working with her in 1952. All the reports describe her as having begun her mission in 1952, so we were really in there on the ground floor.

Q: Have you had any contact with her in the interval since then?

WILSON: Yes. I can't say the name of the Foreign Service widow who is in charge of her work in this country now -- still -- but she arranged a little service, an opportunity for Mother Teresa to talk to interested people. This gathering was arranged in a church in Bethesda, Maryland. Evan and I went and were seated on one side. Mother Teresa was taken up front, but when she looked down and saw me, she left where she was standing and came up and embraced me most fondly. I don't think she was told I would be there, but there was no question that she remembered. It was to me a very emotional and happy encounter....

It was a wonderful experience to be in on the ground floor with her and one of the most worthwhile things that I was able to do in the Foreign Service. That and working with the orphans really made a difference. It certainly [made] a difference to them and it [made] a difference to the thinking of our driver who took us out each week. He was as interested in what we were achieving with the children as we were and he was able to pat them on the back and tell them to stand up straighter or help them coordinate enough to catch a big ball. He became a part of it, but the day that he drank water from the great jug that we always took with us, water that we participated in, too, was a real crossroads. He had come to feel that we were not untouchable after all. He was a Brahman himself and he drank from our container.

PICKERING: We did get a chance to meet and see Mother Teresa in Calcutta, where she lived, when we visited the consulate in Calcutta. I was very impressed with her because she didn't, to me, exude an aura of spirituality as much as she looked like a very efficient, very practical, down to earth, little, old lady who accomplished all these things.

My husband knew that, when he went in, she was going to go after him because she wanted the United States to grant special visas to her nuns who were traveling to the States. And she couldn't understand why we had to charge her money for them. She wanted to have free visas, to which, of course, our State Department said no, because, if we did it for every charity that was visiting, this would be very difficult.

Nevertheless, as soon as we sat down, she looked at him with bright eyes and she said, "Mr. Ambassador, I have a problem with you!" [laughter]

And he explained the situation. He said, "I'm very sorry, but this is my government's point of view," and she attacked him again! [laughter]

I was just quite amazed. Somehow along the line she said, "I never accept any money from governments. Never!" Even though we had seen in the courtyard some bags of food. She accepts food, but she never accepts any monetary gifts, anything that would limit her ability to do what she thought was important.

She said that, two days before we had been there, a young Hindu couple had come in after their marriage and they wanted to donate the money from the marriage to her, and just gave it to her. And she said, "The money just comes." So I was quite impressed with her.

WEISZ: On a trip from Delhi to Calcutta, the plane -- one of those little two-engine things with only one propeller -- was completely occupied. In the front seat sits a woman everybody is in awe of, Mother Teresa, and she's sitting alone. As we overfly many, many miles of India, I thought how I would love to sit with her. She said she'd be happy to have some conversation, and we talked about the many things that Indian nuns were doing in Delhi, because I could talk of nothing else but Delhi. I had not lived in any other city.

And then, after lunch had been served, Mother Teresa said to the steward, "Do you have any food left over?"

He said, "Oh, of course, Mother, if you're still hungry you may have some more food." 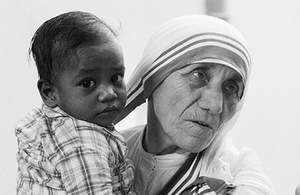 She said, "Oh no, not for me, I'm not hungry any longer; I just want some food so when I get off the plane and the Sisters in Calcutta greet me, I will have a gift for them."

The steward said, "But we haven't any packing materials."

And Mother Teresa said, "Never mind, I have this" (laughing), and she produces some empty boxes that were crushed, and bags, and the steward fills them with food.

The plane lands in Calcutta and -- you know how eager you are to get off an airplane after you've been sitting for hours -- people had jumped out of their seats before landing. I got up, stood in the aisles, and I'm no little woman, so I blocked the aisle, and I wouldn't allow anybody to rush ahead.

I said, "Mother Teresa, will you please leave so that the passengers could leave?"

She said, "Oh, I thought I would wait until they all left, because I can only walk slowly." I said, "You walk as slowly as you wish and I will not allow anyone to stampede you."

She laughed and she blessed me and off she went.