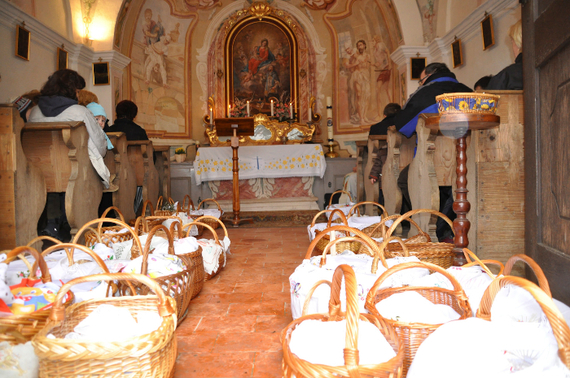 I tentatively pushed opened the heavy wooden door of Tuštanj Castle and peeked inside. An open air courtyard lay in front of me, enclosed by a graceful portico of grey stone arches. While I was expected by the owners of Slovenia's only non-nationalized castle, there was no one in sight and the only sound was the steady beat of the heavy rain.

With no idea of what the proper protocol was to announce myself, I timidly crept along the circumference of the courtyard, jumping practically a foot in the air when a disembodied woman's voice yelled out a cheery hello. I looked left and right before it occurred to lift my eyes upward, where I caught sight of the lady of the manor on the second floor balcony. Petra Pirnat gave me a friendly wave and invited me up. 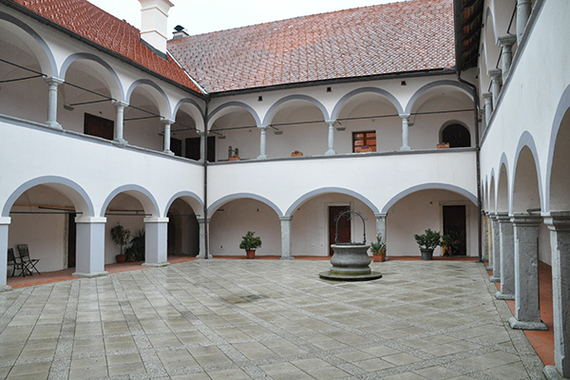 I met her at the head of the stairs, where she welcomed me into the family's expansive kitchen, introducing me to her husband Peter and their nephew Vito Urbanija. Petra directed me to a seat at the table just as three young boys came bounding into the room. We exchanged smiles; they were full of curiosity about their visitor and I was as excited as they were about the Easter tradition soon to be celebrated. Peter and Petra were modest about their proficiency in English and Vito, a young man fluent in the language, acted as our translator.

He explained that Tuštanj Castle was built in 1490 and fully renovated in the second half of the 17th century. It was originally owned by the Counts of Lichtenberg from Germany. In 1800 it was purchased by Ignac Scarija, a merchant. The last owner from the Scarija family was Maksimiljana Scarija, who married the castle's groundsman, Luka Pirnat, in 1854. Their courtship was accepted despite the fact that Maksimiljana was 40 years of age and Luka, 25 years. Petra wryly observed "That's very trendy today!"

When Vito said the couple had no children "because Maksimiljana was so old," Petra and I exchanged smiles. With no heirs, after Scarija's death, Luka inherited the castle and the estate. He remarried in 1874. The castle has been in the possession of the Pirnat family since then and Peter was born here.

Vito showed me through several rooms of the Castle that are preserved as a museum, observing how fortunate the family is to have such a legacy; given the Slovenia's tumultuous history, not many such properties are still standing with contents intact.He showed me a love letter Maksimiljana had written to Luka, ledgers that recorded rents paid by peasants who farmed on the estate, and 200-year old plates from the era of Napolean's rule of Slovenia. Vito pointed out an antique piano, sitting down at the bench and fingering a melody -- the occasional discordant key made the music that much sweeter. 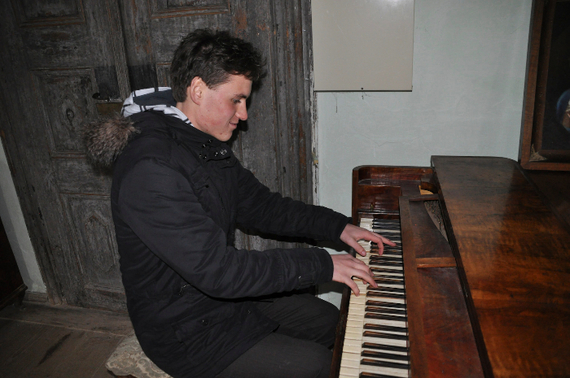 Back in the kitchen, Petra said, "We must go, a lot of people are coming." She and the three older boys each took one of the straw baskets from the kitchen table. Peter put on his hat and coat and scooped up his youngest son, just up from a nap and rubbing the sleep out of his eyes.Vito and I followed them down the stairs, through the courtyard and out the castle door to the tiny chapel next door.

Situated under the shade of an immense 300-year old plane tree, the chapel was built in the 17th century and is dedicated to St. John of Nepomuk. The chapel's doors were wide open, displaying in all their glory beautifully-painted frescoes by acclaimed Slovenian artist Franc Jelovšek. The family took their seats in the ancient carved pews. Members of the community that dapple the rolling green hillside of the Moravče Valley began to arrive, each stepping inside the chapel to set down their own basket and then retreating to hover outside. Soon a priest and an altar boy entered, saying hellos and then donning robes before beginning the service.

The Slovenian name for Easter, Velika noč, means 'great night,' reflecting a joyful belief in Christ's resurrection, which according to the Bible occurred at night, or Sunday at dawn. Slovenians also call the holiday vuzem, vezen and vüzen related to the word vzem, which means "taking." The term refers to the taking away of meat during the 40-day period of Lent. On Easter Sunday meat can be partaken of again. 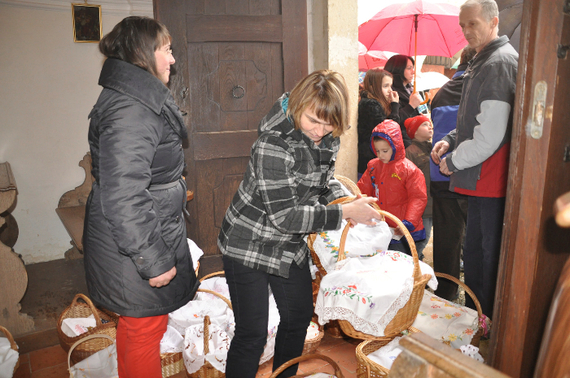 On Holy Saturday afternoon, the blessing of Easter baskets takes place in most Slovenian towns. This custom has not changed since the 16th century. Easter dishes, known as žegen, were originally brought to church in huge baskets with two handles called jerbas. In the past, the baskets were so large because the loaves of bread were big, having been baked in the immense brick ovens in use at the time. Now they are sized to fit in modern ovens, and are brought to church in smaller baskets, covered with beautifully-embroidered cloths.

In a 15-minute service, the priest blessed the baskets and those present, sprinkling holy water and waving incense. In a call and response exchange, the Father and the faithful spoke prayers; being neither able to understand Slovenian nor a practicing Catholic, I don't know for certain what the incantations meant. I do know that for me it is a sacred privilege to be far from home and welcomed into a family and community to share in their beliefs. 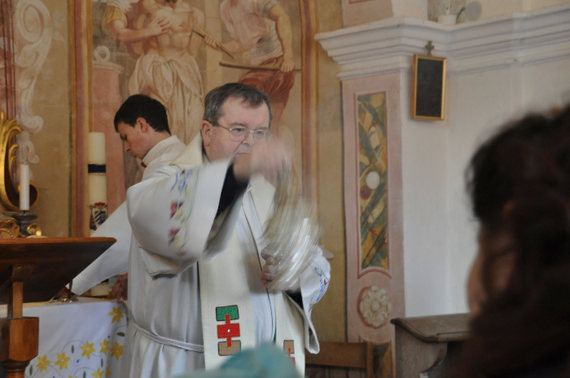 I found such a warm welcome and spirit of openness to be the embodiment of Easter's message -- both exalting the experience of being human and also honoring our divinity within.

Meg Pier's www.ViewfromthePier.com is all about exploring the world's cultural traditions & spiritual practices through travel and photography.