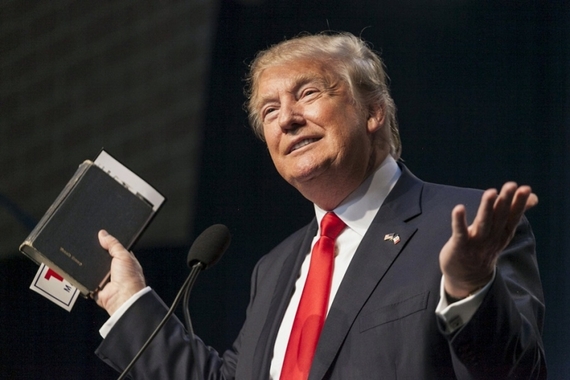 Love him or hate him, Donald Trump, the unlikely real estate mogul and entertainer turned Republican presidential candidate, appears to be in the race for the long haul. Trump's policy positions (such as they are) are getting more scrutiny as he continues to release them. Not only that, but his largest competitor, Dr. Ben Carson, a man of long-standing faith commitments, has how surpassed him in the polls- including a growing lead in Iowa. Could this be the beginning of Trump's unraveling?

Donald's recent decline in the polls brings me to the question of his religious positions. Shouldn't those be subject to scrutiny, considering that he stood stoically grasping his Bible as prominent evangelicals leaders prayed over him? From the moment Trump claimed to be a Christian and gloated about with his Bible, he volunteered to receive criticism on his religious positions- which is easy to do because of the blatant inconsistencies between his religious and political ideas. To add to this irony, his own church (Marble Collegiate Church) rejected the notion that he was an active member. Are his Bible-toting shenanigans a simple ploy to dupe evangelicals? According to the video, it appears he has been initially successful.

Since Trump has adamantly maintained his faith claims, I would like to present the "Blessings and Woes" of Jesus in contrast to Donald's own gospel, that is, his good news to: "Make America Great Again." Looking at Jesus' teachings in light of Trump's statements will help us see the vast ocean of distance between the two.

Woes
Jesus: "But woe to you who are rich, for you have received your consolation." (Luke 6:24)
Donald: "I mentioned that I was rich? But I was once on welfare."
Jesus: "Woe to you who are full now, for you shall be hungry. Woe to you who laugh now, for you shall mourn and weep." (Luke 6:25)
Donald: "I would build a nationwide network of weight loss clinics and I would force Rosie O'Donnell to pay for it."
Jesus: "Woe to you, when all people speak well of you, for so their fathers did to the false prophets." (Luke 6:26)
Donald: "Amazing how the haters & losers keep tweeting the name "F**kface Von Clownstick" like they are so original & like no one else is doing it...."

Satire aside, if we consider the contradictory relationship between his political ideas and faith claims, it is no wonder that Trump is being overrun by Carson. Carson offers, perhaps, a more authentic version of the persona that Trump has been trying to display. Is the American Right finally starting to see Trump in all his Trump-ness? I hope so. To make the argument that Trump is, as he says, a Christian, one must overlook his obsession of wealth, misogynist comments, socio-economic bias, and racial prejudice towards immigrants and minorities. He is the one that Jesus would "woe," or more accurately, "damn," while pretending to be a devoted follower of Jesus. He is an imposter of the worst kind.

Sorry Mr. Trump, you may have fooled many, but I call bullshit.