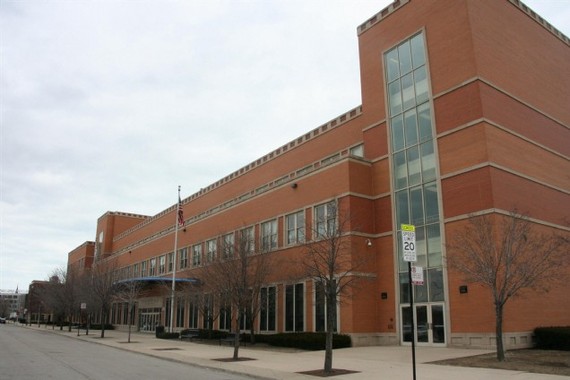 Edward Jenner Elementary Academy of the Arts, colloquially called Jenner, is a pre-kindergarten through 8th-grade public school, with a population that is 99 percent low income, 99 percent African-American, and 20 percent diverse learners. Located in the former Cabrini-Green neighborhood, the school's particular location is a testament to the defiant history it has had to endure over the past decade.

The Cabrini-Green housing project was once home to 15,000 residents, but with time it became infamous for many of the national problems with housing projects: violence, gangs, vandalism, poor living conditions and unemployment. In an effort to rid the country of public housing projects, Cabrini-Green was demolished in 2011, causing mass displacement of the families who had once called it home. Given Jenner's location in the heart of the neighborhood, it faced low enrollment issues following the demolishment -- so much so that in 2013, it was put on the school closure list. But thanks to the strong support of the School Board, Jenner was kept open.

This is not to say that things have been easy. Students of Jenner have faced "a tremendous amount of transition, loss and difficulty in their young lives," says Heidi Wagman, a Program Coordinator for Blessings in a Backpack at Jenner. She explains that numerous students are homeless and many students have long commutes on public transportation in order to continue attending. A large percentage of these students have challenging living arrangements, living with extended family or even in shelters. Furthermore, the school's low enrollment has catalyzed significant budget cuts, causing them to cut enriching programs and fire faculty.

The Blessings in a Backpack program at Jenner has helped to assuage some of Jenner's shortcomings. For the past six years, Chicago Sinai Congregation has led Blessings in a Backpack's involvement at the school, providing the resources to give 180 students in pre-K through 5th grade food to take home every Friday. Wagman says that the program has been a bonding opportunity for its weekly volunteers, as "many of us met through these weekly packing sessions over the years have grown close, sharing stories of our daily lives, kids off to college, family trips, death of a loved one, favorite books and movies," she says. "We look forward to our weekly packing sessions. We know that the food we provide to the Jenner students helps get them through the weekend."

Blessings in a Backpack's support at Jenner doesn't stop at Friday's meals, however. Over the years, the program has contributed in other intangible ways, like providing school uniforms and eye glasses, refurbishing school instruments, funding field trips and bringing in speakers for Career Day. Thanks to Blessings' program at the Jenner School, students not only get fed over the weekend, but they get to know they are cared for and love. "Not only are we providing nourishment, we are letting them know that we care about them," says Wagman. "Nothing feels more important than feeding these kids every weekend."