Leeloo the boxer, mere days away from giving birth, was brought to a high-kill animal shelter in North Carolina just before the holidays. The deaf, emaciated dog had spent much of her time chained to her previous owner's porch and was in desperate need of care.

Her arrival at the shelter set off a chain of rescue efforts that changed her life and the lives of her six puppies. 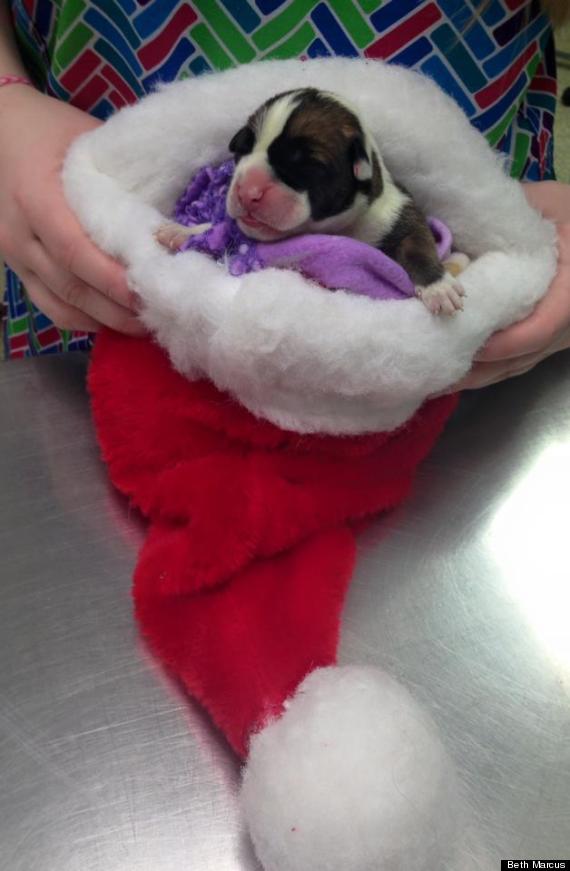 This is Jojo, Leeloo's Christmas "miracle" puppy. Jojo was delivered on Christmas Day, more than 24 hours after her other siblings. She was stuck inside Leeloo and almost didn't survive. Photo credit: Beth Marcus

Someone at the shelter reached out to a local nonprofit called Mayberry 4 Paws, which reached out to Christina Lee, who runs Deaf Dogs Rock, a nonprofit for deaf dogs. Lee in turn got in touch with Erika Proctor, the founder of Green Dogs Unleashed, a Virginia-based rescue group dedicated to special-needs animals.

"I immediately offered help and set the wheels in motion to get her," says Proctor, who coordinated a caravan of volunteers to bring Leeloo from North Carolina to her new foster home, with Beth Dunlap Marcus in Charlottesville, Virginia.

"I live on a farm and have six dogs living with me," says Marcus. "I couldn't let her or her puppies be euthanized."

"By all accounts it was pretty textbook. She had one baby on the 23rd, and then four more early morning on Christmas Eve," says Proctor.

Proctor and Marcus thought that Leeloo was done. But on Christmas morning, the new mom didn't seem to be feeling well. Marcus took her temperature and found she was running a high fever. A Google search told Marcus that there might be another puppy stuck inside Leeloo.

She was rushed to Sara Salmon's emergency veterinary clinic, where an X-ray showed three more puppies, one of which was blocking the others from getting out. 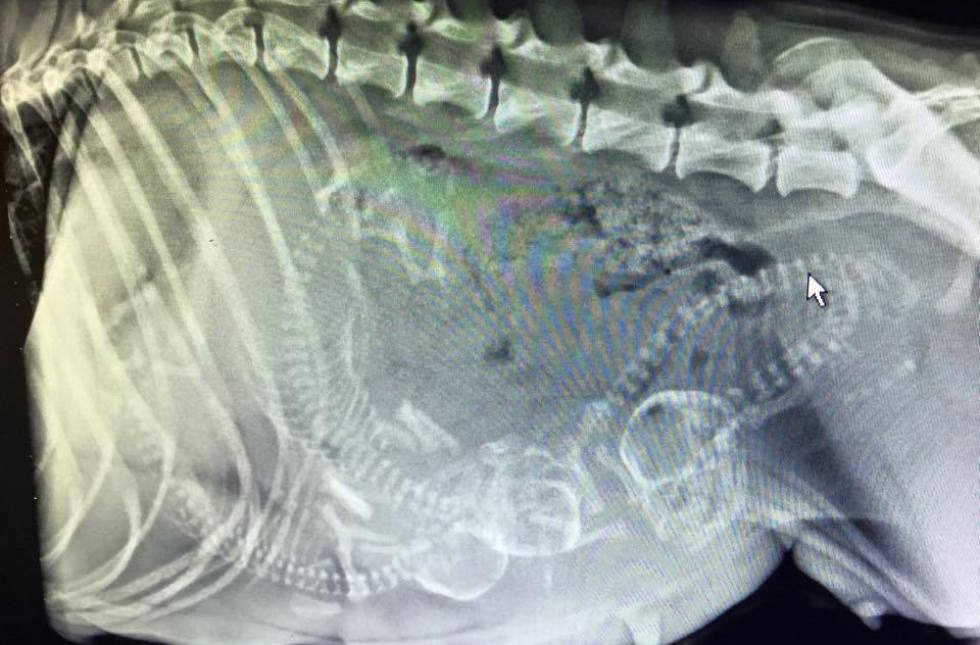 Salmon operated quickly, but two of the puppies were already dead. The third, however, lived.

"The last little one, completely against all odds, had a heartbeat and was breathing," says Proctor. "By only God's grace, this little tiny miracle girl arose from her mom."

"She's a little cutie," says Salmon, who credits the birth less to the divine than to humans: those who let Leeloo's body deteriorate, and those who are doing their best to undo that damage.

"She should be 10 pounds more," Salmon says of Leeloo, who is between 20 and 30 percent underweight. "I'm grateful for organizations like Green Dogs." 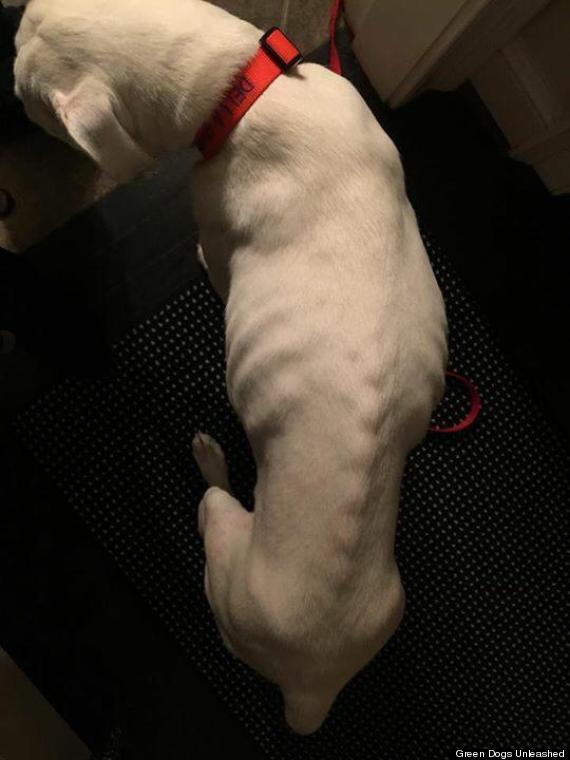 You can see Leeloo's ribs sticking out in this photo, taken just after she'd given birth. Photo credit: Beth Marcus

Leeloo and her final pup rejoined the others not much later. The whole family is home with Marcus now.

"The rest is history! They are all so fat and healthy," says Marcus, who'll be taking care of the gorgeous gang for a few more weeks until the lucky little ones are ready for solid food. Then they'll go to another foster home for a few more weeks, and the pups will be spayed and neutered to make them ready for permanent homes of their own. 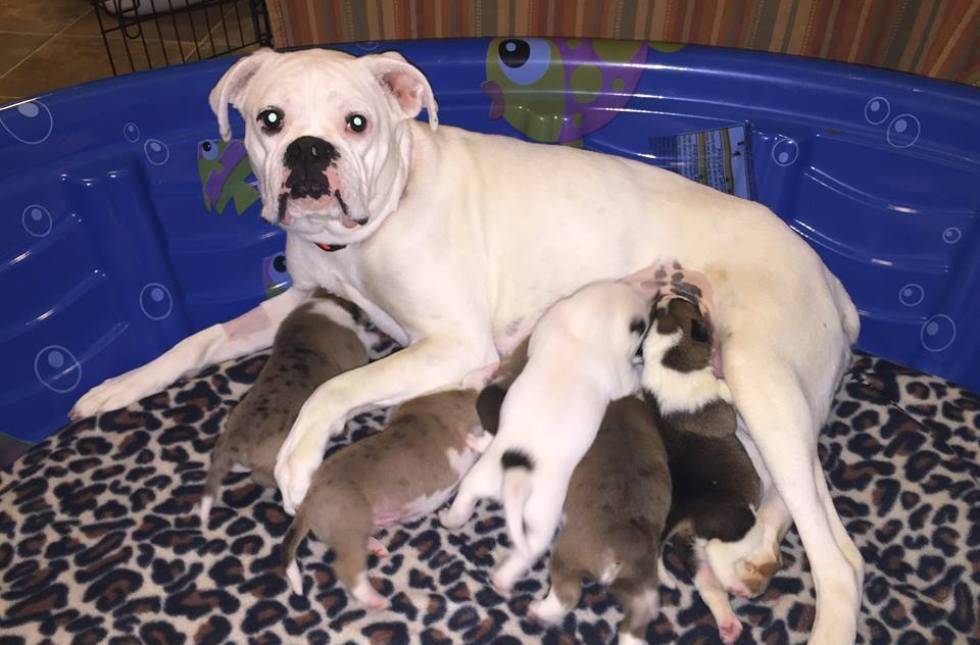 Leeloo is turning out to be a great mom, Marcus says. Photo: Beth Marcus

Leeloo will eventually get a new home, too.

"Through all of this, she has remained by far, one of the sweetest and most forgiving souls I have ever met," says Proctor. "Now it is time for us to give back to her. We will stop at nothing to find her only the absolute most amazing forever home." 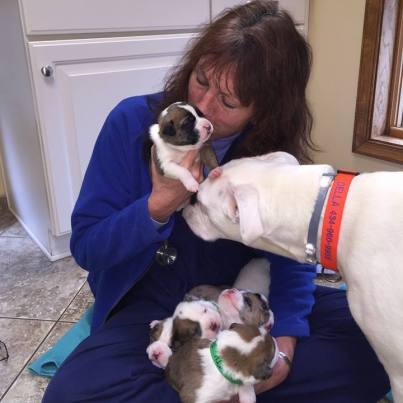 Keep tabs on Leeloo and her babies on the Green Dogs Unleashed Facebook page. You can donate to their care and treatment here.

Want to do more? Take in a foster animal. Often, the shelter or group will cover the cost of medical care and other expenses. You can also offer to help drive animals to their new foster homes, like volunteers did for Leeloo. Reach out to your local shelter or favorite rescue group to find out more.