Lets play the Guessing Game. All writers base their characters on someone. After all, in order for writing to feel true, you have to have lived part of it. And so, as it is with many New York based novels, my new one, Mercury In Retrograde does indeed have characters that are inspired by actual people. Famous people. New Yorkers.

And so I have devised the game — with the winner getting a signed copy of the book and an invite to one of my two book parties (Uptown: May 26, Downtown: May 28). It's all in good fun, and let me warn you — they are not as obvious as they may seem. I have not included any of my current colleagues (as I'd like to keep my job, thank you very much), nor are they all based solely on one person. In fact, most are an amalgam. The characters may not be based on people in the field in which they are described. So, have fun and guess away by leaving comments below or tweeting me at @PFro! I'll be picking the winners on Monday.

1. Ashley Winskdale, the beauty editor at Y: accused by the editor 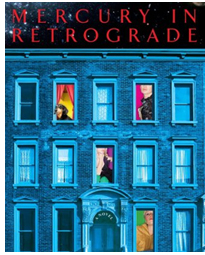 Jack of not being "the pedophile's dream you used to be," wears her hair in a straight dark bob, only five foot one, and insists on dressing in wool jumpers with white shirts that had rounded collars and puffed sleeves.

2. Martman, the news editor at the Telegraph, who is short in two ways: He's edited both in height and "down there" — but makes up for it with his temper. A man more "susceptible to flattery than any actual display of knowledge" ends up giving away a coveted job to a family member rather than the person who deserves it.

3. Trace Howard, the news anchor for NY Access — New York's other local cable network — is a "preternaturally tan 62 year old" with thinning hair on his head and a full mustache. He likes to walk into a room and announce, "I am a powerful and attractive man!" before getting his bald spot covered with tanning cream. He has wandering eyes, hands and knees and loathes his co-anchors. Wears Drakkar Noir.

4. Laura Lopez, a nakedly ambitious blonde 30 something entertainment reporter from a Wasp background (she changed her name as "by 2011, Hispanics will be the largest demographic in the US and they will want to watch one of their own!") lists her idols as Geraldo Rivera, Natalie Morales and Charo. Likes to describe individual celebs as "down to earth," "a real gentleman" and "so funny - not depressing at all!" (with regards to a manic-depressive comedian who was in rehab for a bad meth problem and tried to commit suicide several years earlier).

5. Kandace Karllsen, a "real, expressive" newswoman "with heart" who talks with her hands because it "drives the point home" and is fixated on "proper a-NUN-see-ay-SHUN!" She likes to call gossip columnists and give them items about herself. In fake voices, of course. In order to make herself seem "bookschooled" Kandace also uses long smart-sounding "words" like "Irreducibly", "irregardlessly," etc.

6. Kitty Foil, a teen starlet who accuses one of the main characters of "box-blocking" her with a film director at the Met gala. A 17 year old actress who'd been raised in the Disney farm leagues, Kitty brags about losing her virginity to Mick on a tour bus, keeps running to the bathroom to "powder her nose," gets very drunk and ends up doing improbable yogic positions in rollerblades before wreaking havoc on the gala (yes, this really happened with someone, just not at the Met Gala).

7. Jann Elder, an attractive yet self-absorbed writer/director (I know, I know - it's a stereotype - but there's a reason for stereo types, because they're just so often true!), who insists that his film starring Meryl Streep was the best work the Oscar winning actress has done as "in all those (other roles - Sophie's Choice, Kramer v. Kramer) all she did was cry, cry, cry and yell. Typical female roles, which can be played by any woman. Isn't that what women do anyway?"

8. "The head of a news network" who, during his entire time with a prostitute "all he did was re-enact a Geico commercial."

10. Marge, the mercurial station manager at NY Access — who is hopped up on 10 pots of coffee a day and a constant supply of "the Blues," The Pinks" and "The Greens" — a colorful assortment of prescription pills she likes to put in a clear vase because it matches her décor. Marge is known for a nasty temper — set off by anything from her plastic surgeon reminding her that her face lift will take longer to heal as she is not as young as she claims — or an underling calling her the aged term of respect, "ma'am" — but is a deeply loyal person.

Want more hints? Tough, cause that's all you're getting. Hope to see you soon!