Last November, when the Tea Party Express was just building up a head of steam, it seemed worthwhile to stop for a minute and listen to a country song. Why? For one thing it's a really good song, and it had a great hook. "Here in the real world," it says, away from those powerful guys in Washington and New York, "they're shuttin' Detroit down."

That theme was so inclusive and compelling that conservative singer John Rich (John McCain's campaign troubadour) was able to get noted lefty Kris Kristofferson to act in the video, along with Mickey Rourke. That made the song important and interesting. How was John Rich's message able to win over those guys? Because it was simple and true: The people who got us into this mess are doing just fine, and the people who worked hard and played by the rules aren't. What concerned me back then was that this message, while compelling and accurate, could wind up benefiting some of most bank-friendly politicians on Earth. The Republicans who deregulated banking (along with centrist Democrats) could wind up with more power. They'd then be in a better position to carry out their agenda of blocking the modest banking reforms and economic fixes being recommended by the White House and Congress.

Isn't that pretty much what's happening?

Reading Arianna Huffington's new book Third World America made me think of that song again. There's a medical phenomenon called "blindsight," where people who seem to be partially or completely blind are able to respond to visual information under test conditions. The theory is that they're not blind at all, but are unable to consciously process the information they're receiving from their eyes. Isn't that what's happening in the country right now? Most people aren't economists or policy wonks, after all, so they probably haven't "seen" this chart: 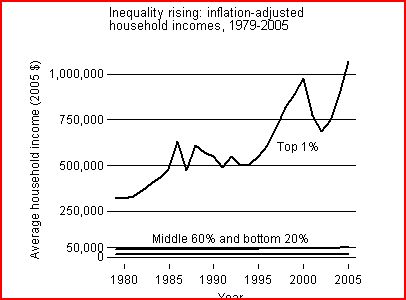 But on some level they know it. And they may not have seen this chart, either (from CBS Moneywatch via Mike Konczal), but you can bet they "know" it too:

People need ways to integrate and process all the information they're receiving. They're struggling with the cognitive dissonance they experience when they're told the economy's doing better, because they know that in their world it's not. Human beings have always used stories and songs to integrate the information they receive, and we need better stories and better hooks than we've been getting lately.

Know what's a good hook for these troubled times? "Third World America." Know what's not? "Recovery Summer." So score one for Arianna before the cover's even cracked. The "recovery summer" theme was bound to ring false for the millions of Americans who still live in a devastated economy. That was destined to reduce the credibility of the very institutions that prevented even greater damage - institutions that could do more to help them.

We've seen the Administration move toward a more coherent narrative in the last week, but will it be enough? "I ran because I felt that we had to have a different economic philosophy in order to grow that middle class and grow our economy over the long term," the President in Friday's press conference. That sounds like a story worth telling.

Third World America is direct and clear in its message: Decades of aggressive corporate lobbying, driven by bankers and other large corporations, have led to a series of policy decisions that are eroding the American standard of living. The details are all there: The financial industry's gone from 2.5% of our GDP in 1947 to 8.3% right before the meltdown. Financial profits went from a maximum of 16% between 1973 and 1985 to 41% right before the crisis hit. And rather than being chastened by their failure, or disciplined by taxpayers in return for being bailed out, bankers have embraced their old ways with enthusiasm. Meanwhile the American households that rescued them lost $13 trillion in wealth between mid-2007 and March 2009.

There has been, in economist Simon Johnson's words, a "quiet coup" led by a classic "oligarchy." Bankers now exert enormous control over both the economy and the political process. People see that, and they're angry. Anyone who wants to discuss the current state of affairs better be prepared to speak plainly - "third world America," "quiet coup," "oligarchy" - or they'll be ignored.

Some of us are actually old enough to remember when the American dream was at its peak. Even if you were just a kid, you knew certain things: If you worked hard, you could retire in financial security. You lived in a country that led the world in science research, education, and social mobility. We designed things, built things. We were creating the future. Many of us later traveled into Third World countries for work or pleasure. We were saddened by the crumbling roads, unsafe bridges, and unregulated companies poisoning the air and water. The income inequities seemed so unjust, and the people's inability to heal their country through a free political process was tragic.

Little did we suspect we might be looking into our own future.

But Arianna's not just crying in her beer. The final section of the book details a series of fixes, which include: Campaign financing. Citizen activism, with less reliance on politicians as saviors and more on ourselves as the agents of change. Spending on infrastructure and education. Bank reform with teeth. Homeowner relief. Service to others. Moving your money away from predatory financial institutions.

I'd add another to that fine list: Stop judging the tea party radicals around you. Sure, some may be extremists and racists, but lots of them are just frightened and angry. They're trying to reconcile what they "see" with what they're being told. Right now they believe a false story, but it hangs together and makes them feel sane in a seemingly insane world. Demogogues have always used these kinds of stories to exploit human fear. You can't blame people for believing a false story if they haven't heard the real one.

So don't blame the individuals, blame the story. Tell them a better one. The truth is a helluva story. But even the truth works better if it has a good hook.