Members of the Climate Action Coalition in Portland, OR, together with Greenpeace activists made history on July 30 when they forced the MSV Fennica, Shell Oil's Arctic icebreaker, to stand down, delaying its departure by approximately 40 hours. 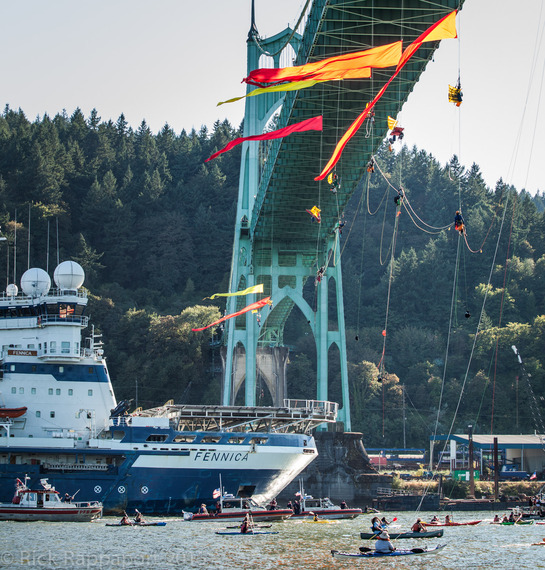 The Fennica was in Portland for repairs to a gash in its hull, which it only became aware of when water started leaking into the ship. This carelessness is not surprising: The Department of Interior has stated that there is a 75 percent chance of an oil spill in the Arctic once drilling commences, a spill which experts say would be virtually impossible to clean up, posing unacceptable risks to indigenous peoples and the marine environment. Shell is preparing to commence drilling in this region--ironically, thanks to rapidly melting ice in the Arctic due to climate change-- at a time when NASA's former top climate scientist says we may see at least 10 feet of sea level rise by 2050.

In record-breaking heat--killing record quantities of salmon in rivers around the Northwest--people came out to cheer on and join in the historic blockade. The visuals were striking: Hanging on ropes and connected to one other beneath the St. John's Bridge like human-sized cocoons were 13 Greenpeace activists, their orange and yellow streamers waving in the hot breeze. In the Willamette River arrayed beneath the climbers, were a handful of "kayaktivists," local Portland activists in brightly colored kayaks. Inspired by similar waterborne activism in protest against Shell's Arctic drilling in Seattle, all intended to blockade the ship. And for two sleep-deprived days, they succeeded.

The final minutes were filled with drama: As the Fennica approached, police cut the ropes connecting the Greenpeace activists hanging from the bridge. Kayakers paddled toward the icebreaker and continued to impede its path. Despite the risks, kayaktivists and Greenpeace climbers stood their ground, while over 500 people gathered on the shore, chanting, "Stop that boat!" In a scene reminiscent of the lone Tiananmen Square protestor who stood before a rolling tank, the Fennica did indeed stop as kayaks flooded its path. But with kayakers detained by the Coast Guard, the ship eventually passed through the blockade.

While this display of courage garnered global headlines, it apparently won't stop Shell from drilling in the Arctic, although scientists tell us doing so threatens three-quarters of the Earth's major cities with rising seas in the next few decades.

Fortunately, this blockade is not unique: This is one of many courageous blockades that have taken place around the Pacific Northwest--on rail lines, roads, and in forests and treetops--all of which are part of a collective, spontaneous uprising against climate change and the decimation of the Northwest's green forests, its fisheries, and its leadership on environmental issues. Termed "Blockadia" by writer Naomi Klein, the people of the Pacific Northwest are acting as a choke point between massive deposits of oil, gas, coal and tar sands to our east and north and Asian markets. As Sightline Institute has calculated, "coal, oil and gas shipments from the Pacific Northwest would carry as much carbon content annually as five Keystone XL pipelines."

Given the climate imperative-that we keep at least 80 percent of proven fossil fuel deposits in the ground in order to avoid dangerous and possibly runaway climate change-this grassroots resistance may just save the planet. A key legal component is upholding the treaties of First Nations and Native Americans throughout North America.

With the exception of a few elected leaders, most notably Oregon Senator Jeff Merkley, most seem to be more beholden to the fossil fuel industry than the people that got them there. If they won't respond to this planetary emergency, we will. With our bodies on the line, we hope to inspire a "human tipping point" that stops a climate tipping point that will be unstoppable. Join us.