Blogging, the now popular form of online journaling, began in the mid-90s and has exploded ever since. In 2013 it was estimated that there are 152 million blogs around the globe. And these blogs cover any topic under the sun - from personal finance to entertainment, design to sports - you name it, a blog exists. In many countries, blogging, regardless of the topic, is simply a harmless and popular pastime. For some it is even a source of livelihood. But there are also countries where this form of self-expression and those who partake in it, are truly and utterly at risk. Unfortunately, Bangladeshi-British blogger, Arif Rahman, is all too familiar with this.

He is on the wanted list of the Ansarullah Bangla Team, an Bangladeshi Islamic extremist group with ties to al-Qaeda and the Islamic State. They are believed to be responsible for a recent very troublesome wave of ruthless killings that have taken the lives of innocent Bengali bloggers and cultural activists.

"In 2015 alone we had five murders, four of them were bloggers, my colleagues and my direct friends," says Arif.

And these murders have been brutal.

Just over one year ago, Avijit Roy, a Bangladeshi-American atheist blogger and proponent of secular humanism, was hacked to death as he and his wife Rajida were leaving a Dhaka book fair.

"He was a monument in our Bengali blogging sector," says Arif of Avijit.
Arif and Avijit, who had been in contact for 7 years, had just met for the first time a few minutes before. "I left him to meet a few friends, just outside the book fair, when everyone started calling me and saying:
"Are you okay? Because on TV it said Arif Rahman and his wife was attacked.
"No, I'm fine. What happened?"
Well, within a few minutes we got news that he was the one that was actually attacked.
We rushed to the hospital and the moment we entered the emergency room, the surgeon was coming out and said the patient had expired. And literally I was the first person to know that he was no longer with us. It was extremely surreal and so sad."

Arif began his blogging activism in 2006. He left Bangladesh for the UK for work-related reasons and it was there he discovered the first Bengali blog he'd ever seen.

"I thought: "Wow. People can write about things that they care about, all in Bengali language-- our language?" Arif recalls. "I saw people talking about ideas and things happening in the country at the time and what they were saying made sense, you know? We wanted to say these things for a long time but nobody was saying these things, I mean nobody." 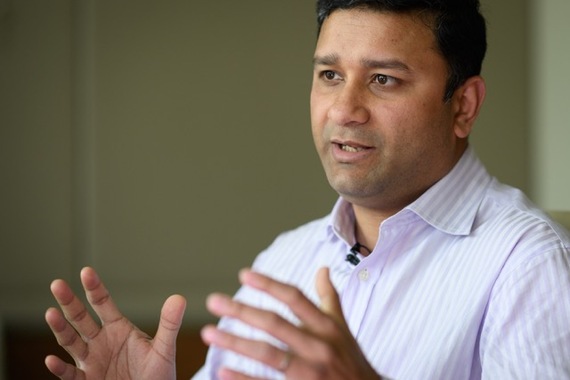 The emergence of blogging in Bangladesh opened the door to a whole new avenue of self expression: "This blog thing was revolutionary in a way, it meant anybody could just 'write their mind' so-to-speak, read and most importantly, interact amongst each other in the comment section. That interaction created an interesting, buzzing environment where everybody began expressing and sharing their thoughts."

In this environment, Arif began expressing his concerns about the future of Bangladesh and the rise of radical Islamism he saw in his mother country. "We saw a lot of propaganda by Islamists," says Arif, noting the heavy presence found in traditional media, including full pages in national newspapers and dedicated channels and time slots on TV. "But finally online," Arif remarks, "we could come back to them and bounce back to them with counter-narrative criticism."

Yet this counter-narrative has come with a hefty price tag as Bengali bloggers find themselves, literally, between a rock and a hard place. On one hand, Islamic extremists threaten their lives, and on the other hand the Bangladeshi government remains complacent and offers bloggers absolutely no protection. Moreover, the government also censors secular voices, while leaving radical Islamic voices unchecked. They've permanently blocked sites including Bangladesh's most famous satirical website, and occasionally YouTube and even Facebook.

"Everybody used to think, that Bloggers are the problem. Because they talk too much, they complain too much and it's all well and fine if they get killed. After every murder, the police chief, the ministers, the prime minister, everybody, including the media, including the so-called 'progressives' came out and blamed us. Although we were the victims, they blamed us for aggravating the Islamists, and said that we brought this death upon us," says Arif.

But as he points out, this was indeed not the case as subsequent murders have since proved. Secular professors have been killed simply for organizing cultural events; a Hindu tailor was slaughtered based on mere stale rumors of defaming the prophet; a young man was hacked to death for expressing secular views on his Facebook wall; and editor of an LGBT magazine was murdered. And sadly, the list continues.

"We used to say that it's not us that caused this whole thing. We were only protesting what was happening in front of us, and we were so right," remarks Arif.

Not only has the violence against bloggers proven to be an early symptom of a growing threat affecting the livelihood and safety of all civilians in Bangladesh, it's also a sign of a serious issue that is impacting the world on a global scale.

"Bangladeshi bloggers are not alone. Bloggers in Saudi Arabia, Bloggers in Yemen and other countries are also affected and attacked. It's a global problem and Islamism is spreading quite rapidly. They're criminalizing criticism of religion."

And sadly, Arif is absolutely correct. Just a few weeks ago, Omar Mohammad Batawil, a blogger in Yemen, merely 17 years of age, was shot and killed, simply for expressing his secular views.

Now, in an effort to band together and take a stand, Arif and a group of fellow blogger activists have joined forces to raise awareness for this issue, frequently publishing on Movements.

The unwavering dedication of bloggers like Arif is remarkable. And the sacrifice they've made to exercise their freedom of speech is no small feat. Even in the UK, which prides itself on being a tolerant and Western democratic society, Arif has felt the threat of lone wolf attacks.

In 2013, for example, he discovered that leaflets with his name and screenshots of what he'd written were being circulated just outside mosques in the UK. "And I was quite afraid, because my wife was pregnant at the time," he recalls.

"If I did not spend time in activism, I would actually make a much better living in the UK and live a selfish, care-free life," admits Arif. "But 45 years ago, our freedom fighters gave their lives for this country. A lot of them died and they could have just saved themselves, but we would not have the country we have now if they didn't make their sacrifice," says Arif, referring to Bangladesh's bloody struggle for Independence in 1971.

Movements has established a partnership with SaferVPN to offer such activists and dissidents anonymous, encrypted internet access, so that they can continue to express themselves freely in the face of censorship and extremism. The author, Karen Mesoznik is the Inbound Marketing Manager at SaferVPN. Read more and get involved with the cause at Unblock The Web.