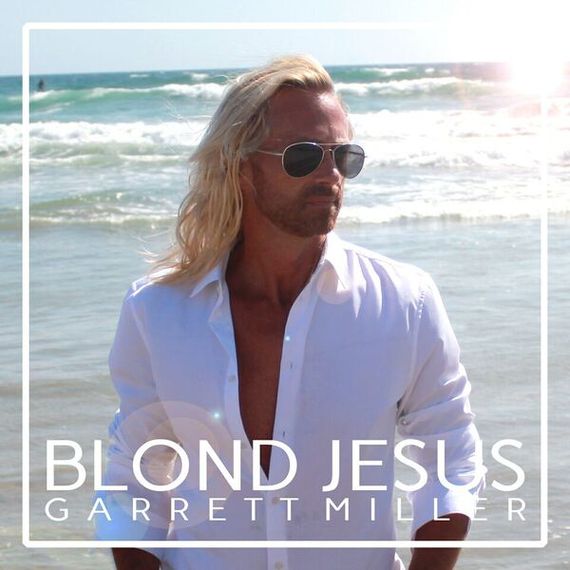 The festive and rainbow-decorated month of June approaches and Gay Pride soirees are afoot. But the time is also ripe with other potential celebrations. The U.S. Supreme Court is expected to give birth to a ruling for Marriage Equality soon.

All eyes are certainly on that ... which it makes it all the more refreshing to come across a gay recording artist on a mission. Singer-songwriting Garrett Miller may not be the real incarnation of a Gay Messiah but on the creative front, he's definitely rising to the occasion. Blond Jesus drops June 5 and on it, Miller hopes to stoke the marriage equality fires in a powerful way.

The album's title certainly captures one's attention but so, too, does one of the work's more prominent tracks, an anthem aptly released just in time for Pride. Dubbed "It's A Nice Day For A Gay Wedding!" (which will be released May 15) the song and video take audiences from the Stone Ages to celebrating marriage equality. It culls from Billy Idol's 1982 hit "White Wedding" and is positioned to become one of the more memorable tracks for Pride month and beyond.

Blond Jesus boasts 11 rock, pop and dance tracks in all. The intent is clear: To inspire people to live out their dreams, accept and love who they are and those around them, and surrender to a life that is designed to be exhilarating. Debra Wilson of MAD-TV fame lends her powerful vocals to one of the more Top 40-worthy tracks--"Sweat & Testify"--as does award-winning singer/songwriter Kelly Fitzgerald on the festive "Witch Sisters Halloween." Other songs include "Blond Jesus," "So Long Mr. Nice Guy," "Bouffants & Beehives," "I AM," "Memories That Time Forgot," "Unlike You, Numbers Game" and a hard rock-inspired "Face."

In an era where civil rights and marriage equality are destined to rise above a decades-long suppression, Blond Jesus materializes at the perfect time. Here, Miller opens up about the creative process and other divinely inspired things.

Greg Archer: Tell me about the genesis behind Blond Jesus? From where did the album idea emerge?

Garrett Miller: While recording the album, I'd written lyrics for some harder, edgier songs like "Face Front" and "So Long Mr. Nice Guy" and started evolving into who I am now: less corporate suit and tie; more authentic, rougher around the edges. Blond Jesus came to me when I was at Scott and Renee Baio's Ugly Sweater Christmas party. I'd arrived wearing a hideous homemade concoction I'd hot glued together earlier in the day. I knew a few people, but most guests I was meeting for the first time. Here I am, proudly wearing this super ugly sweater, long blond hair, scruffy beard. At some point during the night, some of the ladies started affectionately asking "Where is that Blond Jesus guy?"

On the way home the radio started cranking out the Bee Gee's 'Stayin' Alive.' I can't make this up. It hit me right then, and I smiled. I thought it would be a great social commentary to use the "controversial" title, write, on the surface, a "controversial" song that was also an awesome dance track. When I got home I messaged my producer, Brian Pothier, and said, "B--I've got to do one more, and you're going to freak when I tell you about it."

I sat down and opened up my heart on that piece of paper. For all my life I've just gone along with the flow, didn't rock the boat--you know, because that's the way it was. Everywhere you look--the news, Facebook, everywhere. It's this political or religious so-called "leader" professing the dumbest things I've ever heard, like, "You're going to hell because you ate the wrong kind of cheese sandwich on a Tuesday!" "You're a sinner because you don't love people the way I think you should love people--and I'll also throw in a convenient 'The Bible says' so you know it's official by quoting and/or misinterpreting my rants to suit whatever hate I feel like will best serve me and get me a sound bite tonight." So let me get this, we're supposed to believe everything you vomit simply because you use "The Bible says ..." Really?

Greg Archer: Talk about the track "... Gay Wedding." It's a lively, uplifting track and video for that matter. What did you hope to convey through it?

Garrett Miller: It's almost June 2015 when the U.S. Supreme Court is expected to rule in favor of Marriage Equality in all 50 states. Long overdue. I can't wait for my fellow LGBT brothers and sisters to be able to get married and officially receive the same Federal benefits heterosexual couples receive. There are more than 1,000 benefits married couples receive that LGBT couples do not. When people say they're "fine" with gays and lesbians, but they shouldn't have the right to get married--it's always "fine" until you want to act like a bigot. The time is now for Marriage Equality. It's time.

Greg Archer: What do you love most about singing and performing?

Garrett Miller: It's the most fun I've had doing anything in my life. I won't claim to be the best singer in the world. I have fun. I'm passionate about singing. This is what I want to do forever, and I want people to have fun when they hear me perform.

Greg Archer: What do you love most about songwriting?

Garrett Miller: I love telling a good story. Get me in a room and turn me loose. I like taking you on a journey with each song. Everything on the album is my truth for the last couple of years in my life. I'm telling stories that are good, bad, ugly, and fun. A lot of fun.

Greg Archer: What do you hope to communicate, overall, through this work?

Garrett Miller: People who have heard a preview of a couple of the songs on the album always ask, "Do all of your songs revolve around God?" I have to laugh, because that's not what it's about. OK--"Blond Jesus" is a giveaway right there, but its a social commentary and meant to stir up controversy. At least until you hear it and love it for what its really saying. On "Sweat & Testify," references make a point, but it's about finding the strength to make things happen. I mean stop whining and waiting for someone else to save your day! Believe in miracles. Make miracles happen. Get off the cross, we need the wood. Do it yourself.

I want people to get inspired with my music. I want people to listen and think, "I can do great things in my life! I can create a world I want to live in! I can make a difference in my life and the lives around me! I don't have to settle for the Status Quo!" And dancing. Always lots of dancing.

Greg Archer: There is definitely a deeper message within all of this.

Garrett Miller: I always say "Believe and receive, attract and allow." It's powerful when you do your best to live life this way. With Blond Jesus, I want people to know it's OK to be who you are. You are loved. You are a shining star. You can make your dreams come true. You can do anything you want to in life--make it great! You've got one go-round on your mortal coil, spend it doing things that make you happy.

Greg Archer: Best advice you've been given about being a recording artist?

Garrett Miller: Breathe. Learn to breathe. You can't sing if you're not breathing right. Take a deep breath before your next big line(s). And breathe some more in between.

Greg Archer: Best advice you've been given about life?

Garrett Miller: I'm a big fan of Dale Carnegie's "How to Win Friends and Influence Others." In the last couple years I've also read Bob Burg's "Go Givers" books and love his message--[sic] do things authentically in your life you are passionate about and you will be successful. Paul Coelho's "The Alchemist" is simply one of the most brilliantly written full circle stories I've ever read. It helps me understand life every day.

It's funny, sometimes you'll get a message given to you in life, and if you're not ready, you won't understand it. When you are ready, it hits you like a ton of bricks. Now when things happen, I do my best to sit back and go, "What's my lesson in this? How can I improve from this? What can I do better next time?" I'm learning something new every day.

Greg Archer: Best advice a Blond Jesus can pass along to others right now?