My son Micah had a long, complicated hospitalization, during which he received 211 units of blood. That is an extraordinary amount of blood, especially for an infant over the course of just 11 months. I am forever indebted to the generous blood donors who saved and extended my son's life. 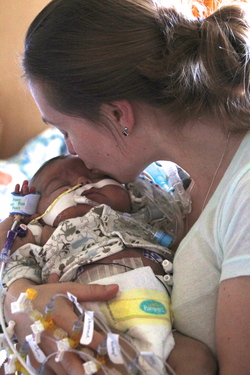 During Micah's hospitalization, Micah's care team made it very clear that the benefits of Micah receiving someone else's blood outweighed the risks. Micah's hospitalization demonstrated to me the life-saving power and healing properties of blood transfusions. I have deep admiration and sincere appreciation for blood donors. Blood is one of the most incredible gifts you can give to someone in need.

Micah was born three months prematurely. Human milk is essential to the health of premature infants. When mother's own milk is unavailable for premature infants, pasteurized donor breast milk is the next best option. Yet, most children's hospitals and neonatal intensive care units do not prioritize human milk as a vital, life-saving intervention for fragile infants.

While healthy full-term infants can metabolize infant formula, the risks of formula for our most premature and vulnerable infants are profound. For fragile infants, formula is often presented as a benign alternative when mother's own milk is unavailable. When in fact, formula increases a premature infant's risk of necrotizing enterocolitis and is directly toxic to their cells after digestion. Necrotizing enterocolitis (NEC) is a multifactorial intestinal disease that affects the bowels of premature infants. NEC causes an inflammatory process that can lead to intestinal tissue damage and death. NEC is infamous for its severe morbidity and mortality rates, with exceptionally high medical expenses that can range from $100,000 to more than $6.5 million. NEC cost Micah his life.

Breast milk is critical for our most premature and vulnerable infants.

There are tremendous barriers that prevent fragile infants in need from receiving pasteurized donor milk. Here are some of the most dogged barriers I've witnessed throughout my journey: 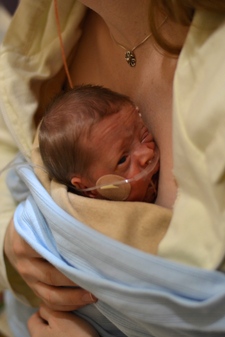 When I gave birth three months prematurely, I sat in the recovery area after my cesarean and begged for a breast pump. I had never even seen a breast pump. I just knew I needed to start making milk for my very premature twins. My nurse refused to bring me a breast pump. She said I'd need to wait until I got to my private room.

Hours later when I finally got my breast pump, I began the routine of pumping for 20 minutes every two hours around the clock. I didn't make a single drop of milk in over 24 hours. My twins' care team explained that if my milk didn't come in soon, my babies would be fed formula.

But, wait a minute.

Formula and mother's own milk are not the only two feeding options available for fragile, very premature infants. Pasteurized donor breast milk is the second best option for our most vulnerable infants when mother's own milk is unavailable.

Why didn't anyone tell me about pasteurized donor breast milk?

See the barriers I just listed? I tragically experienced them firsthand. 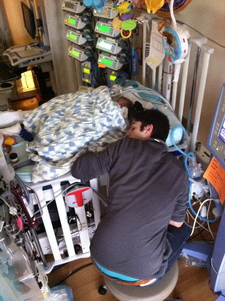 It is unacceptable that families are left in the dark. The risks of formula to premature and fragile infants are often not disclosed to families, and the option of pasteurized donor milk is often withheld. Many mothers with full-term infants who have an oversupply of breast milk do not know that their milk is desperately needed by human milk banks. Human milk banks and milk depots provide pasteurized donor milk to our most vulnerable infants.

Scientific literature supports the use of pasteurized donor milk instead of formula for fragile infants in need. It is unacceptable that many clinicians and hospitals are indifferent to the tremendous nutritional, health, and cost benefits of human milk for their most premature and vulnerable infants in need. The evidence may not be flawless, but it is surely compelling enough that we must start doing what is best for vulnerable infants now. Sometimes all the evidence we need is right before our eyes.

Not every medical intervention will be based on double-blind, randomized control trials. To my knowledge, there is no hard evidence that supports the use of formula for our most vulnerable infants without mother's own milk. Yet, most hospitals give fragile infants formula because they find it more accessible, convenient and affordable than pasteurized donor milk, which is a safer alternative for fragile infants without mother's own milk.

The literature demonstrates that the safest, healthiest option for premature and vulnerable infants is an exclusive human-milk diet. Our fragile infants cannot wait around for more evidence, they need human milk now.

Are you ready to stand up for our most premature and vulnerable babies?

Join the NEC Society and the Best for Babes team for our first nationwide Miracle Milk Stroll on May 10th. We're raising awareness, breast milk donations, and funds so that all of our premature and vulnerable infants can receive the Miracle Milk they desperately need and deserve.

Founder and Executive Director of the NEC Society