New genetic evidence casts further doubt on the authenticity of a grisly French relic: a gourd long believed to be stained with the blood of Louis XVI.

Scientists sequenced the genome from dried blood inside the 200-year-old gourd and found that it didn't match with the DNA signatures of the king's ancestry, nor did it seem to carry the code for Louis XVI's celebrated traits, like his imposing height and blue eyes.

Deposed during the French Revolution, Louis XVI was executed by guillotine in January 1793, months before his wife, Marie Antoinette, fell victim to the Reign of Terror, too. According to legend, witnesses soaked up the king's blood with handkerchiefs after his beheading. An inscription on the elaborately decorated gourd claims the vessel held one of those bloody cloths. [See Photos of Louis XVI's Embalmed Head & Gourd] 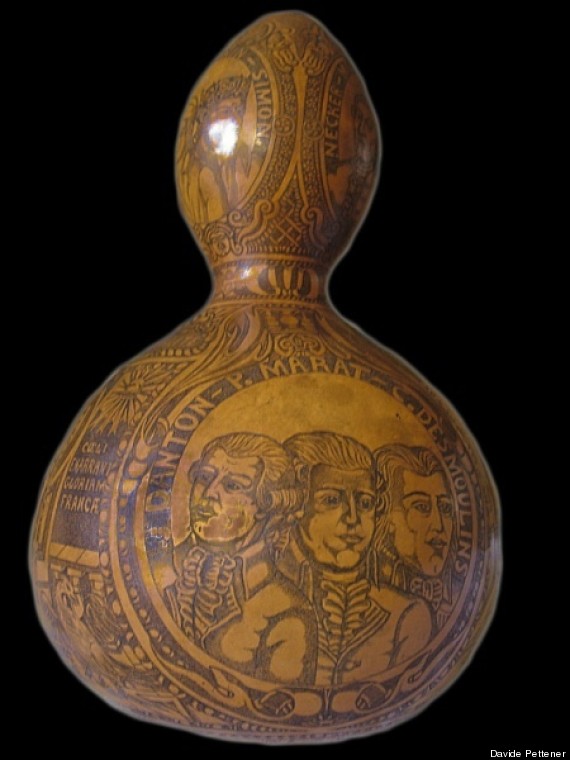 A gourd emblazoned with heroes of the French Revolution contained the blood of Louis XVI.

Last year, a group of scientists compared the DNA signatures from blood found in the gourd with the DNA of three modern male relatives of Louis XVI from different branches of the Bourbon line. The Y chromosomes from the three men matched one another, but not the blood. This revelation, published in the European Journal of Human Genetics, sparked a new investigation.

"When the Y chromosome of three living Bourbons was decoded, and we saw that it did not match with the DNA recovered from the pumpkin in 2010, we decided to sequence the complete genome and to make a functional interpretation in order to see if the blood could actually belong to Louis XVI," Carles Lalueza-Fox, of the Spanish National Research Council (CSIC), said in a statement.

Based on their newly sequenced genome, Lalueza-Fox and colleagues think whomever the blood in the gourd belonged to didn't look like Louis XVI in terms of physical appearance or genealogical heritage.

Louis XVI was known for his towering stature; he may have stood over 6 feet (185?centimeters) tall. Though scientists do not entirely understand the genetic basis for height, Lalueza-Fox and colleagues wrote that the genome pieced together from the gourd blood was not consistent with that of a very tall person, but rather better matched someone with only slightly above-average height for the day. The king also had blue eyes, while the person who left their blood on the gourd more likely had brown eyes, the researchers say.

What's more, the genome had some markers of northern Italian heritage. This finding "cannot be easily reconciled with the known Louis XVI family history, given that just one in 16 great-great-grandparents — Victor Amadeus II, Duque of Savoy (1666–1732) — has some possible northern Italian ancestry," the researchers wrote.

The findings were published online today (April 24) in the journal Scientific Reports.