The moon took on an eerie blood-red hue early Tuesday during the first total lunar eclipse of 2014, a celestial sight that wowed potentially millions of stargazers across North and South America.

The total lunar eclipse of April 15 lasted about 3.5 hours between late Monday and early Tuesday, with the Earth's shadow slowing darkening the face of the so-called "Blood Moon" in a jaw-dropping sight for stargazers willing to stay up extra late or rise super-early for the event. 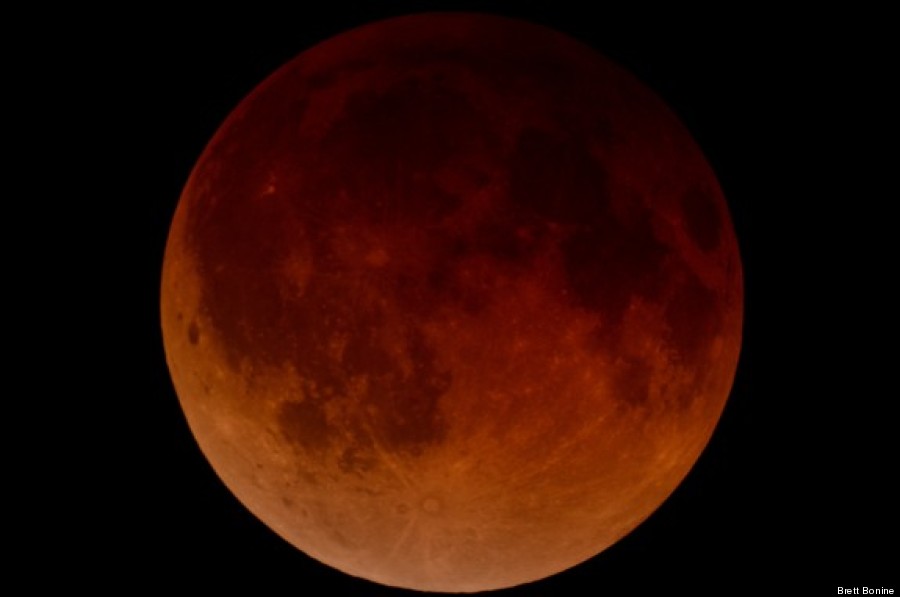 Skywatcher Brett Bonine of Arkansas captured this view of the first total lunar eclipse of 2014 in the early morning hours of April 15, 2014.

The lunar eclipse peaked at 3 a.m. EDT (0700 GMT), with the moon taking 78 minutes to pass through the darkest point of Earth's shadow. It was visible from most of North and South America, Hawaii and parts of Alaska. The eclipse was the first of four consecutive total lunar eclipses, known as a "tetrad," between April 2014 and September 2015. 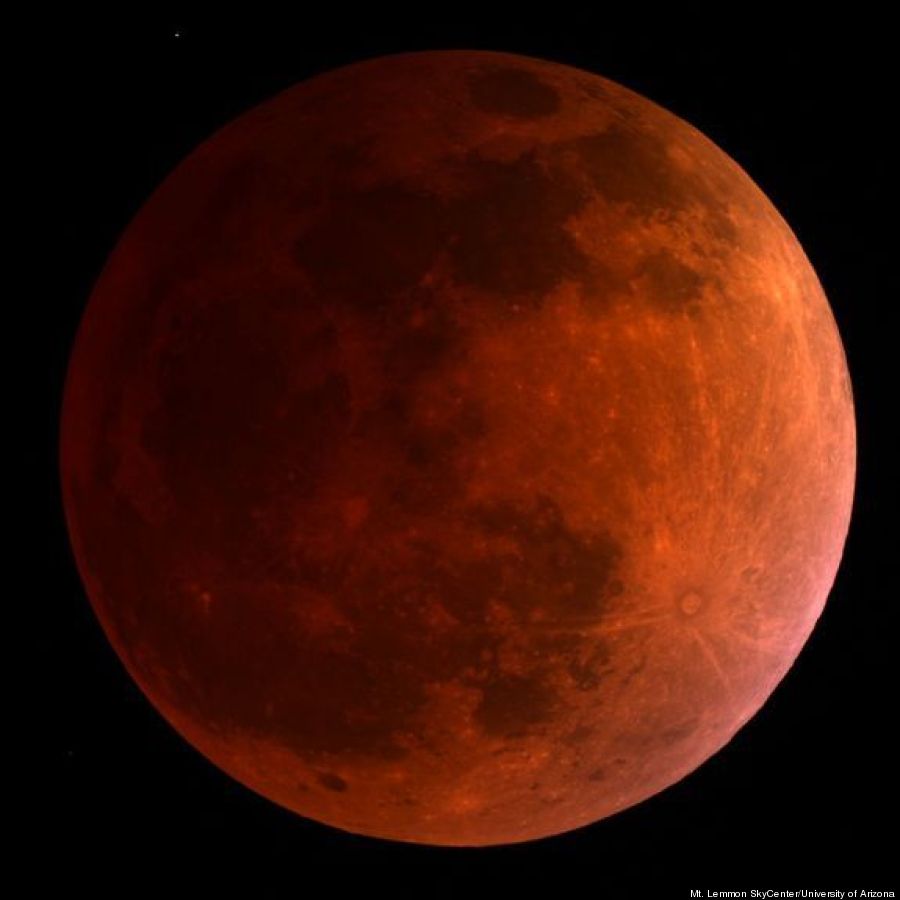 The moon turns blood red in this 3:30 a.m. ET view of the total lunar eclipse on April 15, 2014 as seen by a telescope at the University of Arizona's Mt. Lemmon SkyCenter at Steward Observatory atop Mt. Lemmon, Arizona.

Astronomer Bob Berman, who hosted a live lunar eclipse webcast for the Slooh community telescope using views from Arizona's Prescott Observatory, said event was also one for the record books because of another bright object in the predawn sky.

"It was the most special one, I would say, of our lives," Berman said during the Slooh webcast. "What made it particularly extraordinary was that it happened on the same night as the closest approach of Mars to Earth in years."

So the Red Planet and the "Blood Moon" shined together in the predawn sky in a rare event, Berman said, adding that the bright blue star Spica completed the show.

"We'll never again for the rest of our lives see a total eclipse of the moon on the same night as the closest approach of a bright planet like Mars," Berman said.

Space.com was flooded with lunar eclipse photos taken by excited observers from across the United States, with images coming in from Hawaii, Puerto Rico and even a Disney Fantasy cruise ship in the Gulf of Mexico. 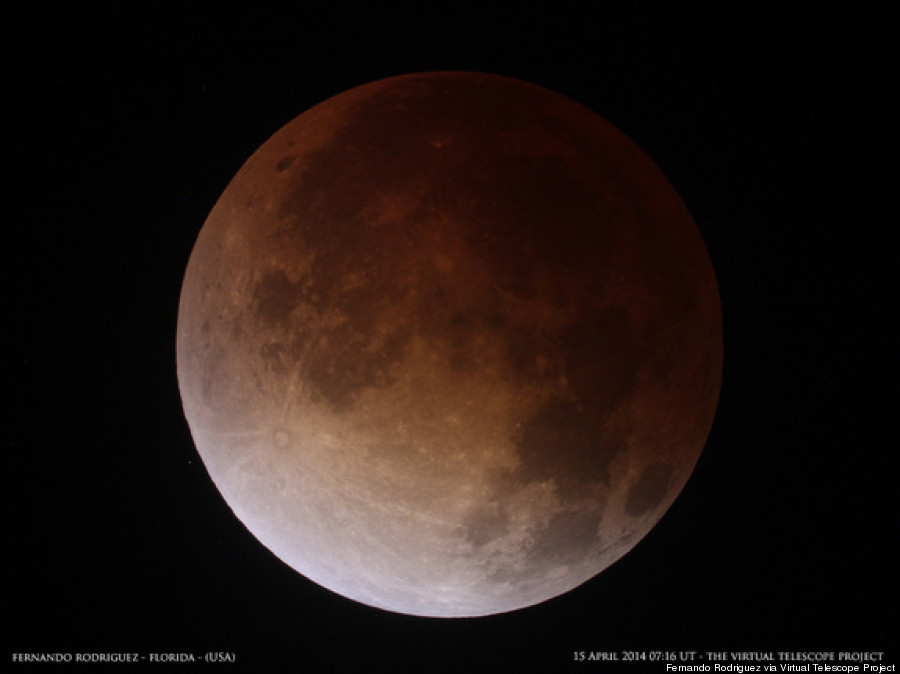 Photographer Fernando Rodriguez of the South Florida Amateur Astronomers Association captured this amazing view of the total lunar eclipse of April 15, 2014 during the totality phase at about 3:24 a.m. ET.

While heavy cloud cover and rain threatened to spoil the total lunar eclipse for observers in the eastern United States, stargazers in the central and western United States got a good lunar show. In addition to the Slooh webcast, several other groups streamed live views of the eclipse.

The University of Arizona's Mt. Lemmon SkyCenter at the Steward Observatory atop Mt. Lemmon in Arizona streamed spectacular telescope views of the eclipse from its start to finish. NASA's Marshall Space Flight Center in Alabama teamed up with the iconic Griffith Observatory in Los Angeles, Calif., to offer another view.

NASA is also keeping close watch on two solar-powered spacecraft currently orbiting the moon. The lack of sunlight on the moon during the eclipse was expected to starve NASA's Lunar Reconnaissance Orbiter and LADEE moon dust probe, both of which are solar powered.

Meanwhile, the Virtual Telescope Project in Ceccano, Italy (where the eclipse was not visible) streamed live views of spectacular eclipse photos by astrophotgraphers across the United States. In South America, the Gloria Project held a live webcast at the Incan ruins of Cusco, Peru to mark the event.

Photographer Tyler Leavitt of Las Vegas, Nevada, captured a stunning series of images showing the moon slowly waltz into Earth's shadow, then take on its iconic blood-red hue. Leavitt took the photos from his front driveway between 11:30 p.m. and 1:20 a.m. PDT, and he was not alone.

Photographer Tyler Leavitt of Las Vegas, Nevada, took this series of photos of the total lunar eclipse on April 15, 2014 as the moon appeared from his front driveway.

"It was nice to see several of the neighbors coming out to take a look also," Leavitt told Space.com in an email.

Editor's Note: If you snapped an amazing picture of the April 15 total lunar eclipse, you can send photos, comments and your name and location to managing editor Tariq Malik at spacephotos@space.com.

Miriam Kramer @mirikramer contributed to this report from New York City. Email Tariq Malik at tmalik@space.com or follow him @tariqjmalik and Google+. Follow us @Spacedotcom, Facebook and Google+. Original article on Space.com.

Copyright 2014 SPACE.com, a TechMediaNetwork company. All rights reserved. This material may not be published, broadcast, rewritten or redistributed. ]]>