I needed blood.
For an artwork, I needed blood to soak into a linen handkerchief. Some suggested cow's blood or pig's blood or whatever you can find in the carneceria down the street. I wanted human blood in case there was a difference in coagulation or color.

And naturally, it had to be my blood. I just wasn't sure how to get it out of the wrapper.

The hyper-elegant piece was to be the crown jewel of a solo show 'Fortuna: A Brief Intro' at Sala Diaz in San Antonio Texas. In one simple wry work, I wanted to communicate the horror of all the blood that has been spilled throughout history in the name of religion. The piece is titled "Blood Spilled in the Name of Fortuna" It has a sub-title "Bar Mocambo" I like the idea of equating a religious war to a bar fight.

To accomplish this piece, all I needed was a little blood.
Quite handy with tools, I am generally always bleeding. Unfortunately, I'm never bleeding enough to fill a small Tupperware. I could always stab around until I got enough going, but how do you stop it? What if I hit an artery? How do I keep it fresh? There were just too many variables to home bloodletting. I had to look outside.

Believing blood removal to be rather simple, I called my doctor's lab and said I wanted to swing by for a coupla test tubes.
They told me this was illegal and that they could not accommodate my wishes.

I explained that the blood was for an art show. In my mind, there is no greater joy. Doors should spring open.
Of course, that's when it got ugly.

"Are you going to throw it?" the nurse asked.
"No!" I replied indignantly.
"Well, what if you threw it? We'd be liable," said the nurse.
"Well, I'm not throwing it." I said, "Besides, what's wrong with my blood? It's my blood. I can do whatever I want with it."
"Well, we're not taking it outta ya!" emphasized Nurse Diesel, "Understand?"

Realizing this situation could be cleared up with a simple call, I phoned my doctor. I don't see him very often but he is my doctor. We have that friendly patter of uneasy confidence and forced bonhomie.
I would never dare press him for a prescription of percocet, but I felt I could ask for a little blood removal on the QT.
He replied, "What if you throw it?"

I entertained the do-it-yourself concept once again. What do I use? An exacto blade? A chain saw?
And what if I found out I liked it? I really don't have the time or the energy right now to discover a fetish or fall into a new obsession. I don't want to be 'a cutter'. Why open a Pandora's box?

I asked several friends for help. "Will you bleed me?" Everyone answered, "No!"
When a new acquaintance answered "Yes!" a little too quickly and salaciously, I said "No."

I put the question out to Craigslist on the internet for any ideas. All I got was sympathy or disgust. Several people suggested pig's blood, but a pig lacks a certain dignity, which the piece most definitely requires.

In this land of the free, blood is like Social Security. You have it, but you just can't get to it. Our government wants our blood to stay where it's supposed to. 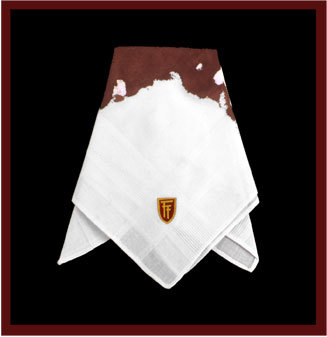 My only option was the underground. Scoring drugs is easy but bloodletting is not. I thought a heroin addict would know his way around a needle. I was just about to head to the LA river when my friend Lucy saved me. Through a friend of a friend's friend's friend, she found a registered nurse, a supporter of the arts, who might be persuaded to bend her Hippocratic Oath and perform the illegal act.

I really don't see the problem with it. Sure, if I were trying to extract your blood, we'd have an issue. But I was merely trying to get at my own.

Second, blood is edgy all by itself.
When you add 'artist' to 'blood' you get questions like "Are you gonna throw it?"
That was the first thing the renegade nurse asked me.
"No," I replied, "But I'm starting to think about it."

Tawny, the rebel nurse, and I got off to a slow start.
First, her phone machine answered "Mutt Rescue. You ditching, dumping or donating?" This threw me off for several days since she never returned my repeated calls; I thought I had a wrong number and a dead end. I started to panic about my deadline.

Second, as an artist, I have a hard time knowing when to shut up-- I don't know why. Every time an artist talks about their own work, my eyes glaze over.

Suddenly in mid-monologue, I realized I was doing it to her! This woman was my last resort. The show was opening soon and much work had to be done. I had to have her help; there was no one to turn to. I needed her bloodletting bad.

As I was in the middle of excitedly explaining the conceptual core of the work, I could sense that I was losing her.
Usually, at a cocktail party, folks just meander away with the vague excuse of refreshing a full drink. But this was no cocktail party; we were on the phone.

Thankfully, brassy Tawny interrupted my convoluted explanation and asked "So, are you gonna throw it?"

In brief, Tawny agreed to help and we became pals. She stuck her neck out for me. We've now shared a few funny, memorable moments and even a bonfire. It doesn't get any better than that.

If you worship Luck as I do, you know that the ancient Roman goddess Fortuna gives us the good and the bad. As Luck would have it, the piece, the crown jewel of my show, was preciously framed and completed on time. I couldn't have been happier.

That joy ended, when the piece never made it to Texas. It was either stolen or stupidly misplaced. Either way, we'll never know.

Some things are bloody-well best left to chance.

___________________
GORDY GRUNDY is a Los Angeles based artist and writer. His visual and literary works can be found at www.GordyGrundy.com. He is the spokesman to the Fellowship of Fortuna, a Disneyesque conceptual work best found at www.FortunaNow.com