If you or a loved one is 50 or older and has high blood pressure plus another risk factor for heart disease, you might want to schedule an appointment with your healthcare provider.

That target blood-pressure reading of 140/90 you were probably told to strive for?

A powerful new study indicates you're better off aiming for the same 120/80 as most healthy people.

You may have heard about this already, as results of the SPRINT study made headlines when they were announced last Friday. Here's a snapshot:

Words like "landmark," "groundbreaking" and "game-changing" are being associated with this.

It's not just the fact that a 20 mm Hg lowering of the target for systolic blood pressure is having a big impact on saving and improving lives. The incredibly encouraging part is that we already know how to do this; many safe, time-tested methods involving lifestyle improvements and blood-pressure-lowering medications are in place. This means that without doing anything radically experimental -- no new wonder drug or novel surgical procedure -- we can take major strides against a condition that afflicts about one in three Americans.

Leaders of the SPRINT study will have a final report in several months. Then a panel of experts that already had been convened to update the guidelines for treating high blood pressure will use those findings to set new national standards. That's expected to come out next year.

The bottom line is that we're on the threshold of a new era in the fight against cardiovascular diseases, the No. 1 killer of Americans. 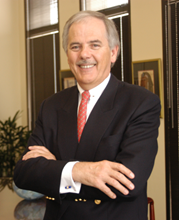 To better explain where we are, how we got here and -- perhaps the part you're most interested in -- what to do next, I'm honored to share the rest of this column with Dr. Paul Whelton, an epidemiology professor at Tulane University School of Public Health and Tropical Medicine. Dr. Whelton is both chairman of the SPRINT study steering committee and chair of the American Heart Association/American College of Cardiology writing committee that's updating the guidelines. So he's the perfect person to answer some of the big questions about the study.

As Dr. Whelton cheerfully notes, "This is a pretty exciting time for those of us who study and treat blood pressure, and who are involved in public health."

What do you recommend for someone who has high blood pressure and another risk factor?

I feel confident in saying that you could begin a conversation today with your healthcare provider to discuss whether you could benefit from a lower target reading.

Some healthcare providers will agree that these findings are very dramatic, very convincing, and they may be consistent with that person's previous beliefs. They may say that even without all the data, they would recommend getting your blood pressure lower than the current guidelines.

However, other healthcare providers will say the results look promising, but that without all the data, they want to wait until experts have fully vetted all the details. That's OK, too. It is up to the comfort level of both you and your provider to determine the course of action.

The important thing is that only your healthcare provider can factor in the details specific to your health. Your provider will know of your particular issues before making a judgment of what is best for you.

I expect you're going to get a mix of people who are conservative ("hmm, we've been fooled in the past by exciting headlines") and those who are progressive. ("This confirms what I suspected.") Really, this is how it should be.

It is always tricky when new results come out.

We don't want to rile the community and make healthcare providers mad because they don't have all the information yet. At the same time, we are obligated to make sure the results are disclosed. And in this instance, it's not like this was just a marginal difference, something like 5 percent. This was about a one-third reduction in cardiovascular events and a quarter drop in all-cause mortality. I'd like to think that even those providers who wouldn't yet make a recommendation for their patients to change would say those results are pretty darn impressive.

How do people with high blood pressure lower their numbers?


We always start with recommendations for improving lifestyle:

We also usually need to use medications. There are several classes of drugs that work quite well. The average person may need two or three of these to get their systolic BP down to 120 mm Hg or less. It's not as onerous as it may sound. You can even get a single pill that combines them.

Your healthcare provider can help find the combination that's right for you.

In trying to get to an even lower target, the important thing is how your body tolerates further treatment. The vast majority of people are going to be just fine. But some people will have the potential for side effects. A blood pressure that's too low could cause dizziness or make you fall. Sometimes the treatments can affect your lab results. Those are the types of things you and your healthcare provider will want to monitor. They are infrequent problems, but they happen. That's why we go to see our doctor or nurse.

Also, when we say we recommend shooting for 120, that's an average. You can go lower. In fact, for us to have derived at 120 as our average, by definition it means that we had about 50 percent of the people below it and 50 percent above. So 110 or lower is OK, as long as the patient is healthy and has no problems while maintaining that.

There's a bit of irony that the same 120/80 that's the goal for healthy people may become the goal for this group of patients. How did this evolve for high blood pressure patients?

Many, many years ago, the medical community had a premise that the older you were, the more you needed a high level of blood pressure to push blood through your vessels. That was the foundation for the belief that higher blood pressure readings were acceptable for people as they got older. In fact, back then, we hardly even treated hypertension in the elderly.

That belief has been chipped away over time. We eventually reached a point where we realized that we should've been treating them all along.

Another change is that in the early days of my career, we thought the lower number in a blood pressure reading (the diastolic) was the important one. We've learned over time that the top number (the systolic) is easier to measure and provides pretty much all the information we need. [Editor's note: SPRINT stands for Systolic Blood Pressure Intervention Trial.]

When we reached the standard guideline recommendation of 140/90, the medical community was basically saying, "We have convincing evidence that high blood pressure should be lowered to below 140/90, but we don't know whether it is safe and beneficial to aim for an even lower blood pressure goal." Some experts even recommended a blood pressure goal higher than 140/90 in seniors.

Starting in 2009, the SPRINT team took on the question of how low to go when treating high blood pressure. I believe that this trial, in layman's terms, nailed it.

This is the first really big study with a lot of statistical power to convincingly show that getting down to the level that we consider optimal in "normotensives" (people with normal blood pressure) should be the goal when treating hypertension, at least in older adults at high risk for cardiovascular disease.

Overall, how are Americans doing in the fight against high blood pressure?

We've come a long way as a population, and we certainly lead the world in progressively spreading awareness among people who have it. This is important because you have to be aware to get treated. The next step is following a treatment plan to get control. This is important, too, because awareness without control isn't enough. We had that for many years, but we're doing way better now.

Our most recent national surveys estimate that a little over 50 percent of adults with high blood pressure are controlled to below 140/90. That's a big improvement over where we were, but we still have a ways to go. And now, if indeed guidelines change the target to 120/80, that obviously is going to mean a lower percentage of the population who currently have it under control.

Where can I get more information?

Our website -- www.sprinttrial.org -- provides a lot of details about our trial, including ways to lower your blood pressure.