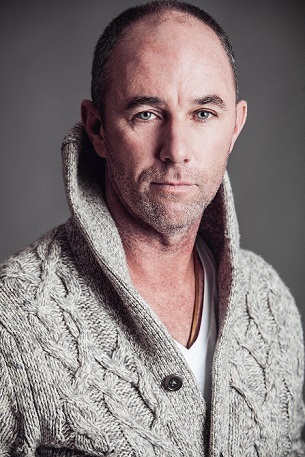 Actor Jamie McShane tells us the honest truth and boy, do we get an earful! Photo by Vince Trupsin.

Jamie McShane's mug is about to be plastered all over your Netflix screen, but you probably already recognize him because he's from Jersey, and you know, so am I. The difference between Jamie's suave way of talking and my 'coolness' factor is that I was born in Brooklyn. And once again, I write an intro that makes no sense. So let's get to the interview!

When you auditioned for your role of Eric O'Bannon for Netflix's new original drama series Bloodline, did you have any thoughts about your paycheck vs. working on films such as Gone Girl and Argo?

Ha!! Fun question...no, not for the audition. For an audition I really only think about, "Who is this character? How can I bring him to life and make him genuine, unique, and connect to the words written for him?" As an actor, you are aware that one role could be a game-changer for you, but I didn't think about the money part until I realized I was actually a contender for the role.

Eric was described as: "Long-haired, skinny, tattooed guy from the Keys." I thought, "Ok! I'm 0 for 4. They really want to see me? How am I going to make this character believable?" But once I read the sides (audition scenes) I connected immediately to O'Bannon and knew how I wanted to bring him to life. I was auditioning for Debra Zane - big-time Casting Director. The show was created by the guys who did "Damages" - big-time! NETFLIX - big-time!! I wanted to make a great impression on them for other roles, BUT, not this one only because I didn't want to be out of town, away from my family.

What worked for me was that I was extremely loose - no pressure because I didn't care about the end result (getting the job). I just loved the role and felt totally free to do my thing. Fortunately, I got it and it's been the most amazing experience of my career.

At what point in your career did you obtain representation by your manager and/or agent? How'd you choose them or how were you introduced to them?

I met my fantastic agent, Kim Dorr at Defining Artists (also Dede Binder and Breanna Bell at Defining), about 13 years ago. Sandi Logan, a very talented and compassionate Casting Director, whom I had auditioned for introduced us. Devon Jackson, my truly amazing manager at Trademark Talent, was recommended to me by Bonita Friedericy, an actress who's work I love, about two and a half years ago. Both Defining and Trademark have been vital to my career.

What did you do for a living before acting?

I worked for my Dad's company in NJ. He sells and services microscopes. I basically drove a truck all day throughout NJ and NY doing delivery/pickup and sales. I also taught tennis and strung rackets. It took me about 12 years of acting before I made a living at it.

Anyone throughout your life ever misspell your name as Jaime? If yes, did it piss you off?

In college people started calling me Jaime (Hymie). A buddy, John Lehning, asked why? I said it was Spanish for Jamie. He insisted it was Hebrew and gave me the full moniker, Hymie Abromowitz. I spelled it O'Bromowitz to bring in some Irish. When it came time to get my name on a Jersey for Intramurals another buddy, Darin Voss, shortened it to "Hymo." Everyone from University of Richmond called me Hymo. No, it didn't piss me off at all.

It's fantastic to get to do multiple episodes on a show!! Although I'm very grateful for any work, and some of my "one and done" Guest Star roles have been amazing experiences for me, I get to dig deeper with recurring roles. I get more time to explore and play with the character and I get to bond more closely with the cast and crew. Most of all it allows me to feel like I'm part of the fabric of a show. That's an amazing feeling!

What's the most annoying thing that's ever happened to you? What did you do about it?

Wow! Annoying? Choices...I just got T-boned by a Prius TODAY and my trusty '95 4Runner flipped on its side with me rolling in it. (literally)....annoying. The overwhelming amount of homework my elementary school sons get....annoying. But, the topper I'd say, is...for the first time in my life I got a dog. Well, my girlfriend and her two sons brought home a rescue to me and my two boys. Now, I know many people who have wonderful rescue dogs...and if any of them would like to trade please call me. We got Shannon. Half Chihuahua half Jack Russell or maybe Whippet?? Not the cutest dog. FAR from the sweetest dog. She growls and snarls when you pick her up until she's comfortable. She hides if she doesn't want you to walk her and whines constantly and won't tell me why!! But, we love her. Especially our boys...aarrgghh.

Name one thing you want to do that you'll never do. Why won't you do it?

I want to fly. No equipment to help me, just jump up and fly....like Superman but not necessarily so fast. Got to figure out the whole defying gravity thing.

Tell us about your first recurring role which was on Kiefer Sutherland's 24 - your character was White House Press Secretary Gerry Whitehorn. Did you have a trailer? What foods did you eat on set?

Yes, a trailer. I ate everything on set. I really screwed that one up! Joel Surnow, one of the creators of "24", had me in for an audition but the character was only in one episode and then killed off. Joel decided to wait for a bigger role for me. One night, awhile later in the season, I got an offer to work the next day as Gerry Whitehorn. I was PSYCHED!! I had a very busy day before I got to set that day but felt that I had the dialogue down. It's the ONLY time in my career, thus far, that I blanked on my lines take after take. It was horrendous!! I spoke with Joel the next day and told him I screwed up in a big way. He said, "You haven't screwed up until I tell you you have. I'll call you back." I was so depressed all day, but Joel was great. He called me back that night and assured me all was okay and gave me another five episodes. Thank you Joel!

What part of New Jersey are you from and do you still have family there?

I grew up in a little town on the northeast tip of Jersey called Saddle River, (before it became the upper crust town it now is) right at the border of Ho-Ho-Kus (love that name!!), My parents are still there and my Dad's business is in Ho-Ho-Kus. A few of my siblings live in the area.

How do you feel about Bloodline being on Netflix versus another medium?

I LOVE IT!! I think NETFLIX is a great company and on the cutting edge of television. I think the "binge watching" style works very well for BLOODLINE as it's more of a long movie than individual episodes. I'm grateful to NETFLIX for the freedom I felt in playing Eric. They seem to hire the creative people they want and then allow that talent to work without putting up barriers against their creativity.