Richard Wagner was the person who championed the term gesamkunstwerk, a unification of all the artistic mediums by way of the theatre. In a world where performances that are uniformly strong across every discipline are few and far between, the Met's current staging of Alban Berg's Lulu, in a new production by visual artist William Kentridge in his second outing at the Met, achieves that gesamkunstwerk status and is a standout.

Kentridge's aesthetic is ink. Constantly-changing black ink drawings are projected onto the stage during the entire performance, sometimes obviously reflecting the drama onstage, sometimes transforming into rorschach blots, sometimes setting the scene, and sometimes adding to the drama itself, helping bridge the gaps between the drama and the music. Disorienting at points? Yes, but the story is so engrossing that it almost doesn't matter. Lulu is a lurid story about an object of desire, Lulu herself, and the lengths to which both Lulu and her admirers go to in order to advance themselves. The work is thoroughly modernist and moves at a breakneck pace, almost cavalier in the way it dispenses so much story in just 3 acts. But despite the fascinating aesthetic (the expression stage picture has never been so relevant) and the high level of dramatic chops among the cast, Kentridge's Lulu fails to yield any new insights about a piece that, granted, doesn't leave much in the way of interpretation.

Berg adapted the fantastic, straightforward libretto from two plays by Frank Wedekind, and it includes lines like "I have never pretended to be anything but what men see in me." Lulu is, plainly and simply, the thing onto which men (and one woman) project their desires. The room for interpretation with a libretto as explicit as that is limited. While the use of projections to tell the story echoes that, Kentridge opts to not mine deeper into a character that is both self-aware and well explored over the opera's four hours. Kentridge does play with the idea of a psychological shadow/alter-ego with an actress who strikes various poses on a piano and remains onstage the entire time, but it is only sometimes effective and is, within the context of this gargantuan production, pretty small. This is just a strong, traditional production with an interesting aesthetic, and that is perfectly fine. 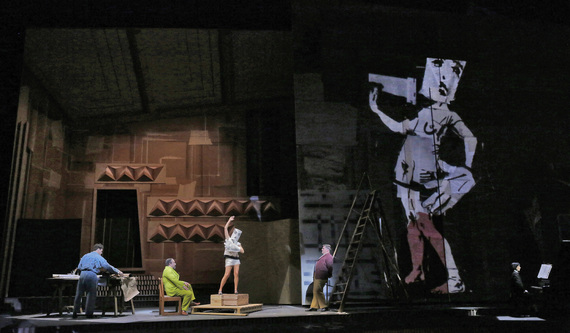 Musically, the production is equally strong. Maestro Lothar Koenigs, who filled in with only weeks to spare after James Levine withdrew from the production, has really joined the orchestra and singers as one. As is not seen enough, the entire ensemble works together. Koenigs draws the ear to the beautiful nature of Berg's jagged 12-tone score in a true case of form mimicking function: Lulu herself is both beautiful and "jagged."

Marlis Petersen is an ideal Lulu. Her voice is light and beautiful and she has a deep feeling for Berg's angular vocal music. Now and again the role's peerless coloratura seems to weigh on her, but that is a minor detail and in no way detracts from her exciting interpretation. Physically, she is up to all the stage business of the production and her acting is particularly distinguished. The shift in physicality from that of a carefree girl to a defeated prostitute is jarring. This will be Petersen's final production of Lulu, so the clock is ticking when it comes to seeing a masterful singer in a signature role.

Johan Reuter is very believable as Lulu's main romantic interest, Dr. Schön, and he brings a sensitive, grainy baritone to the part, though adding a hint of the character's sliminess or at least ambiguity to the interpretation of the text would be appreciated.

Daniel Brenna is adequately clingy as Alwa, Dr. Schön's son and an admirer of Lulu, and sings with a pinging urgency. As Lulu's lesbian admirer and punching bag, Susan Graham has found the perfect part for her in the Countess Geschwitz. Her expressive, penetrating mezzo is put to good use in the part that Berg once said "was the closest thing to a real person" in the opera. Her use of the text and demonstrated fondness for German make her particularly heartbreaking in the final scene where she declares her love for Lulu after being fatally stabbed at the hands of Jack the Ripper (I told you there was a lot of ground to cover). 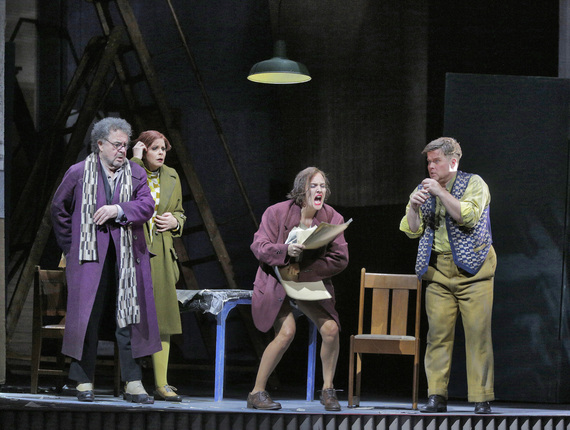 Paul Groves brought passion to the parts of the Painter and the African Prince, but he was sometimes overpowered by the orchestra. Elizabeth DeShong brought a rich voice and some much needed comic relief to her cameo roles as the Dresser, the Schoolboy, and the Waiter. Alan Oke was most successful as the slimy Marquis who attempts to blackmail Lulu, now on the run following her murder of Dr. Schön, her husband at the time. Franz Grundheber perfectly toed the line between father and lover as the beggar Schigolch and Martin Winkler made a skin-crawling acrobat with a forceful voice to match. The entire ensemble sings well in this production.

Greta Goiris' costumes are evocative of the work's early 19th century setting and Sabine Theunussen's sets, though massive and reminiscent of the art deco era, aren't much more than collage screens for Kentridge's projections. Urs Schönebaum's lighting does a great job at setting the scene.

Above all, Lulu is an artistically immersive experience. There's a lot to take in on stage and in the pit. And though the audience thinned with each subsequent act, the reward was sweet. These days, you will have to search hard to find a Lulu more exacting than this one. As the Animal Tamer says at the beginning of the opera, "Hereinspaziert in die Menagerie!" (Come on in to the menagerie)