SELMA, Ala., March 8 (Reuters) - Tens of thousands of people paraded across a Selma, Alabama bridge on Sunday to commemorate the 1965 "Bloody Sunday" march, not waiting for dignitaries who had planned to lead them in marking the 50th anniversary of a turning point in the U.S. civil rights movement.

In contrast to the police violence that marked the original march half a century ago, the mood was often celebratory, at times festive, as an estimated 70,000 demonstrators cheered, sang "We Shall Overcome" and carried signs as they walked across the Edmund Pettus Bridge.

Bloody Sunday on March 7, 1965, took its name from the beating that roughly 600 peaceful civil rights activists sustained at the hands of white state troopers and police who attacked them with batons and sprayed them with tear gas.

"It's very crowded but at the same time it's fun and really great to see everybody coming together all races, all people," one woman told CNN as marchers began moving across the bridge.

A large throng of people started walking across the bridge at the appointed time, before dignitaries could be brought to the front to lead them.

Among the throng were demonstrators who took part in the 1965 march, as well as others calling for immigration and gay rights.

President Barack Obama visited Selma on Saturday and declared the work of the U.S. civil rights movement advanced but unfinished in the face of ongoing racial tensions.

"Fifty years from Bloody Sunday, our march is not yet finished, but we're getting closer," said Obama, the first black president of the United States.

The anniversary comes at a time of renewed focus on racial disparities in the United States and anger over the treatment of black civilians, among them 18-year-old Michael Brown, whose killing by a white police officer in Ferguson, Missouri, last year sparked widespread protests.

On Friday, Tony T. Robinson Jr., a 19-year-old black man who appeared to be unarmed, was shot dead by a white police officer in Madison, Wisconsin, sparking protests there on Sunday.

U.S. Representative John Lewis, who led the march across the bridge 50 years ago and was knocked out by a state trooper, told NBC's "Meet the Press" on Sunday that the events of that day had led to lasting progress in civil rights.

"When I go back, I remember the bridge for me is almost a sacred place," the Georgia Democrat said. "That's where some of us gave a little blood and where some people almost died." 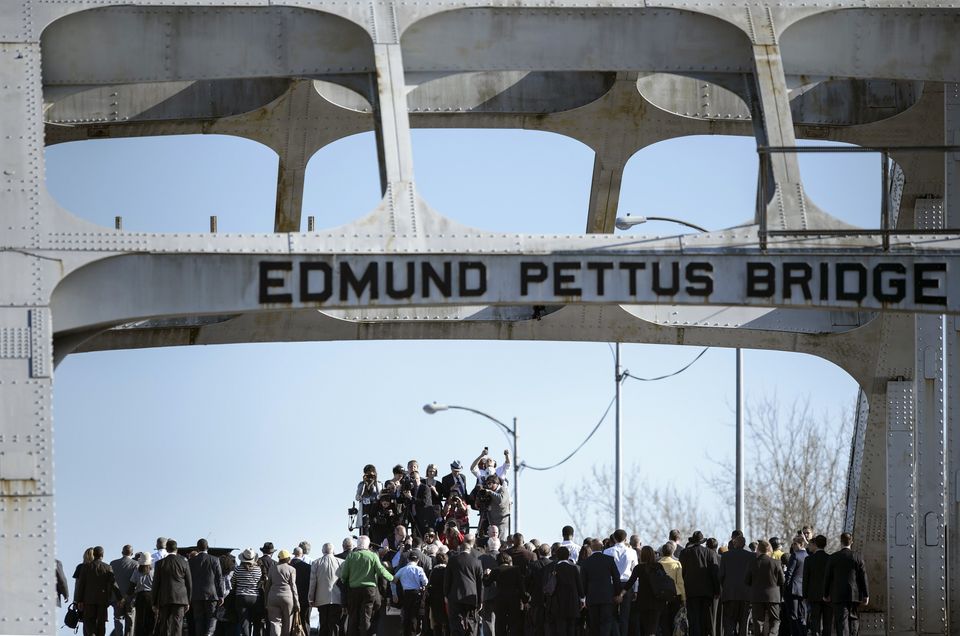