Since we've bailed out the 10 largest banks $83 billion this year alone, should they give it back to us by paying into the U.S. Treasury the amount of this year's sequester? After all, it's the same amount.

On February 20th, Bloomberg News editors asked, "Why Should Taxpayers Give Big Banks $83 Billion a Year?" and issued the first-ever thorough and current analysis of the taxpayer-subsidy to the Wall Street mega-banks. They found that this subsidy is $83 billion this year, but they made no note of the fact that this amount is only $2 billion lessthan this year's sequester cuts are estimated to be, so that all that would need to be done, in order to avoid those cuts, would be to have those mega-banks that we bail out every year forego their subsidy from taxpayers, for just one year.

That $83 billion subsidy this year is, according to Bloomberg's, also approximately the amount of profits that those banks are "earning" this year. So, if the mega-banks wouldn't refund it out of what we gave them last year, then they could just refund it by paying to us - who, after all, bailed out their stockholders enormously in 2009 - the "profits" that they made this year.

The editors at Bloomberg News (hardly a bunch of populists) calculated this $83 billion figure based upon their analysis of the figures in a sadly ignored but rigorous study that had been done by IMF economists, a study that had been issued months back, in May 2012, and which was titled "Quantifying Structural Subsidy Values for Systemically Important Financial Institutions." As Bloomberg's editors summarized the reason for this ongoing federal subsidy: "The banks that are potentially the most dangerous can borrow at lower rates, because creditors perceive them as too big to fail," due to the special Government backing for Too-Big-To-Fail (TBTF) institutions.

The taxpayer-funded annual subsidy to these TBTF banks has never before been calculated as to its actual annual dollar-value, but this rigorous IMF study finally provided the means for doing that. Bloomberg's summarizes: "What if we told you that, by our calculations, the largest U.S. banks aren't really profitable at all? What if the billions of dollars they allegedly earn for their shareholders were almost entirely a gift from U.S. taxpayers?"

This $83 billion, in other words, is the current value of the annual subsidy received by America's 10 mega-banks, from our Government's special treatment of them as "Systemically Important Financial Institutions" (i.e., fully guaranteed by U.S. taxpayers, irrespective of the normal $250,000-per-account limit in savings and checking accounts), or TBTF institutions, which the other 7,053 (out of the total 7,063 FDIC-insured) banks are not - other banks can fail without destroying the U.S. economy. In a certain sense, these are the banks where the super-rich can enjoy FDIC protection without that $250,000-per-account limit, and can even gamble under the protection of that comforting umbrella.

The Dallas Federal Reserve has issued a superb study showing that even at the peak of the crash, when the highest percentage of loans were in arrears, which had occurred around January 2010, only around 3% of loans were in arrears at banks that had "less than $1 billion" in assets, whereas banks that had "over $250 billion" (and only 12 banksare in that august category) were experiencing around 12% of loans in arrears. The following chart on page 7 of the Dallas Fed's study showed that the 2008 crash was virtually entirely a Wall Street (or mega-bank) phenomenon: 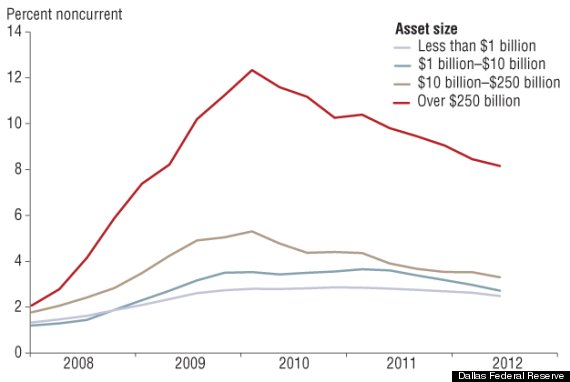 The big-ten banks are the ones that benefited from that $83 billion handout this year, and, as was noted, they did so because they are TBTF. Because these banks (basically the top line there) are TBTF, their top executives can have them engage in, essentially, high-risk gambling (such as "no-doc" or "liars" loans) with the vast sums that are under their command, since the people who buy stock in these banks know in advance that if these high-risk bets fail, then U.S. taxpayers (we) will eat their losses. Consequently, the only incentive for CEOs of these banks is to increase their bank's size even more, so as to increase their bonuses even bigger, since these executives don't really need to worry about risk (except as a PR issue, perhaps, but they hire PR people - including politicians - to deal with that).

When Wall Street got bailed out to the tune of trillions of dollars by the U.S. Treasury, and the Federal Reserve (and with Fannie Mae, and Freddie Mac serving as a conduit between them and Wall Street), this left very little remaining for the Government to spend on the rest of the economy, such as infrastructure and education (the kinds of things that we supposedly pay taxes for), which might be why the recovery has been so slow, from the 2008 crash that was caused by Wall Street's federally-insured gambling with the trillions that they control of everybody else's money. If so, then this sequester is a result of Wall Street's failed bets: instead of cutting back on the subsidy to Wall Street, the politicians in Washington have chosen to cut back on government services to the public. Politicians like Barack Obama and his team, and the George W. Bush team before them, and all of the supporters of TBTF in Congress, made the basic choice to subsidize the mega-banks instead of the needy or the deserving, and this is also why the "Top 1% Got 93% of Income Growth as Rich-Poor Gap Widened" under Obama. It really is a plutocracy; that's precisely the way today's USA is functioning - no doubt about it.

There were other possible ways of dealing with the 2008 crash than to continue to throw trillions of dollars at Wall Street, but that is what "our" Government did, and continues to do, because, essentially, this is what the super-rich pay them to do.

Bloomberg's $83 billion/year finding here is so vast that it suggests that the U.S. is a crony-capitalism, hardly an authentic capitalism. The "cronies" are these giant Wall Street firms and their "counterparties" (namely, each other, plus Fannie & Freddie and the government officials and lobbyists, who all serve Wall Street), and also the stockholders and bondholders in these huge financial institutions: the mega-banks that would otherwise be "cleaned out" but for the TBTF backing they receive from U.S. taxpayers. We're getting reamed by Wall Street and K Street, and this is the first estimate of the actual circumference of that reaming. The Dallas Fed's study says that this reaming must stop, and that, despite what the Federal Reserve itself says, the mega-banks must be broken up. The easiest way to do that might be for Congress to pass a law that prohibits the largest ten banks from participating in the FDIC. That would transform the entire financial system, but Wall Street would hate it because it would yank their honey pot.

Because Wall Street's Mayor Michael Bloomberg made his roughly $20 billion fortune by serving the mega-banks, this editorial from Bloomberg News constituted remarkable news, in and of itself.

One other study of "Valuation in Systemic Risk at U.S. Banks During 1974-2010" found that the taxpayer-subsidy was $300 billion in 2008 but supposedly near zero after 2009. Matt Levine linked to that study on 7 May 2012 under the optimistic headline
"Markets Are Telling Us That Too Big To Fail Is All Better."
The editors at Bloomberg ignored that study. The financial expert Yves Smith, when I called to her attention that that study, which she had relied upon, zeroed-out the megabanks' systemic risk after 2009, wrote in reply,

Bloomberg's editors were courageous to do this, and they are already getting flak for having done it. On February 24th, they issued a follow-up, "Remember That $83 Billion Bank Subsidy? We Weren't Kidding," and explained in more detail how they had calculated this $83 billion sum. They explained why the $83 billion estimate was far likelier an underestimate than an overestimate. This subsidy is a major problem, probably at least as big as the sequester, which it might have helped to cause.

This is why Republicans want the sequester, even though economists, the International Monetary Fund, and even the Congress's own research service (the Congressional Research Service), have amply warned that it will be destructive to the nation.