There was a simple trick, as ever, to the timing.

New York City's police sweep through the Occupy Wall Street encampment, cannily timed for 1:00 a.m., did successfully catch much of the media on their back foot (or even perhaps asleep).

Like a lot of news consumers, I first heard the story on the BBC World Service twenty minutes or so after the operation started. But even several hours later my hometown's own public radio station, WNYC, embarrassingly had to turn, during its The Takeaway breakfast show, to an on-site report from the BBC's reporter rather than from any of its own team.

The Takeaway prides itself (mostly rightly) on being a national show with a New York edge, in contrast with the Washington-based Morning Edition from National Public Radio. It's merciful that The Takeaway (distributed by Public Radio International) can call on the BBC as a production partner, along with Boston's WGBH and the New York Times. (In full disclosure, I should say that I sit as an adviser to WNYC on one of its boards.)

Slow responses also prevailed elsewhere across the US media. And of course Mayor Michael Bloomberg's team worked to hobble them further. Simple physical impediments to eye-witness reporting were fully employed, from a downtown airspace lock-down that prevented TV news helicopters from getting arc-lit topshots, to individual street-level reporters being arrested. These included NPR's freelancer Julie Walker (creditably on the scene very fast, but detained through much of the early action), Karen Matthews of the Associated Press and the New York Daily News' Matthew Lysiak.

The authorities' tactical pre-planning had naturally been kept under tight wraps, insulated especially against possible leaks to City Hall's corps of accredited metropolitan reporters. A cone of silence was ordered too (perhaps even more necessary) to seal off police beat journalists, denizens of Police Plaza's venerable press-room, "The Shack", from any hint of what was to come.

Orders down the line during the various advance exercises, internally billed in the NYPD as "disorder training", emphasized the need to avoid altercations like the PR disaster of October, when an officer was videoed pepper-spraying an apparently inoffensive Occupier.

The end result this Tuesday was that - while unsettling media images were inevitably captured, mostly by non-professionals using cell-phones, of protesters being dragged away - the predominant impression on broadcast airwaves and across the Internet wasn't as authoritarian and oppressive as it might have been. And the final tally was undramatic: about 220 minor arrests; one police officer and one protester hospitalized.

The legal moves that have followed are open to a positive spin by both sides - even perhaps qualifying as a classic "win-win" result, for now at least. The state Supreme Court's decision, endorsing the right of Occupiers to return to Zuccotti Park, but not to encamp there, seems positively Solomonic.

It's evidently good enough for Bloomberg. And good enough for most Occupiers, as the story was spun by organizer Han Shan. He said "the movement has shown it transcends geography" suggesting that we can now expect a shift away from seizing and holding physical territory toward arguably more direct actions, like financial boycotts of banks and other institutions.

To reporters Shan described his group's action so far as "defending a park that is merely symbolic". (And as if to diminish its importance further, the New York Times rendered this quote oddly, perhaps through a mishearing, as "nearly symbolic".)

You do have to be careful with this symbolism business. The Bloomberg Plan, crafted carefully with Police Commissioner Ray Kelly's considerable input of caution, seemed not to have foreseen one PR problem. Early and repeated tweets established currency for a damaging story posted at 2:44am on Occupy Wall Street's own site. It concerned, of all obvious and predictable things, the encampment's makeshift public library. 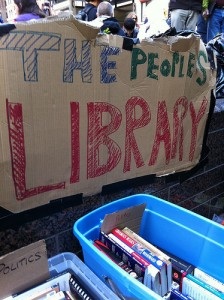 NYPD destroys OWS Library. 5,000 donated books in dumpster. NYPD destroying american cultural history, they're destroying the documents, the books, the artwork of an event in our nation's history ... Will they burn them?

Could this apparent outrage - denounced with an inevitable if exaggerated allusion to Joseph Goebbels' 1933 Berlin book-burnings - really have been ordered by Mayor Bloomberg, the same man who regularly graces the literary Young Lions event at the New York Public Library ... and who generally revels in his financial support for the world of books generally, including some proud sponsorship of the Kenyon Review's Literary Achievement Award ... and most of all the same man who spoke so eloquently against Nazi horrors at the inauguration of Israel's Yad Vashem museum, and extolled the US Constitution's First Amendment as "our freedom to profess our own faiths, to speak our own minds"?

It didn't look good - and the Washington Post compounded things by publishing video of protestor Michael Glazer complaining on the phone that his Torah had been seized and dumped along with all the other books.

In City Hall, damage-control was determinedly ramped up in the image-managers' orders of the day. It took some time, though. 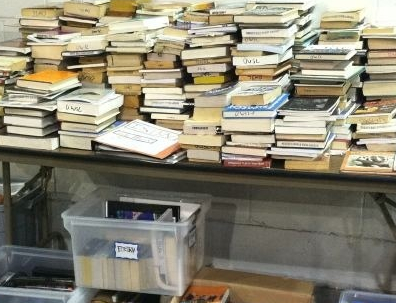 It was in the afternoon of Tuesday that this supposedly reassuring picture was finally issued by the Bloomberg Administration.

Along with it came this abbreviated, Twitter-ready message:

So a trip to the Sanitation Department's garage on West 57th Street will convince us that Bloomberg is not a book-burner. But I'm not persuaded he's a winner in this particular skirmish on the communications battlefield.