Zero2Infinity, a Spanish startup, has entered the space race...with a balloon.

Or a "bloon," to be more specific. And, unlike Virgin Galactic's SpaceShip2, the race is to "near space," not outer space, something Jose Mariano Lopez-Urdiales, the company's CEO, argues is even better.

"It's not about the prestige, it's the view from up high that people want to see," Lopez-Urdiales told The Daily Mail. "There will be many people who will want to go on the trip."

But Lopez-Urdiales argues the 100-km definition of space is somewhat arbitrary and the view from 36 km offers essentially the same viewing experience as higher altitudes. The bright sun is surrounded by a black sky. The curvature of the earth is clearly visible, highlighted by the electric blue of the atmosphere just above the horizon.

The bloon will take up to six people -- four passengers and two pilots -- to 36,000 meters, or 118,000 feet. There, it will float silently for two hours, and what you do in near space is up to you. "Listen to your mp3s, have dinner, sip your favorite drink, or join the mile high club. It's your choice" the company says in a marketing brochure.

Passengers can also choose whether or not they would like to experience up to 25 seconds of weightlessness as the balloon falls back to earth. But if freefall's not your thing, you can choose to slow your descent earlier. Here's how it works: after the bloon is finished cruising, it begins its hour-long descent, or "venting phase," where the helium is released; the ballon, or "sail," is disconnected from the pod, and a parafoil slows the craft on its way down. Eight airbags under the passenger pod ensure a comfortable landing.

The BBC reports that the bloon will launch at night, so guests aboard the aircraft will be treated to a sunrise, as viewed over the curvature of the earth.

Zero2Infinity emphasizes that, unlike other manned spacecraft that are outfitted with rockets (SpaceShip2, for example), the balloon is earth (and space!) friendly. Since helium is the only propellent used, the environmental impact is virtually zero, the company claims.

The project began in 2009, but in August 2011, the company announced an investment from la Caixa, one of the largest banks in Spain, bringing Lopez-Urdiales' dream one step closer.

The bloon has yet to fly with passengers, but it's flown at least two prototype missions, one reaching as high as 108,000 feet, according to a promotional video from Zero2Infinity.

And while the first commercial flight won't take place until 2013 at the earliest, you can already buy a ticket. The cost? Flights start at €110,000, or about $158,500. By contrast, 430 people have already put down deposits to fly on Virgin Galactic's SpaceShip2, which will travel to about three times the height of the bloon and cost $200,000 per person.

LOOK: Images of the Bloon

All images courtesy of zero2infinity.

WATCH: "From Dream to Reality," a promotional video for the bloon.

CORRECTION: An earlier version of this story indicated that the bloon would travel to up to 36,000 kilometers. It will, in fact, travel to 36,000 meters. 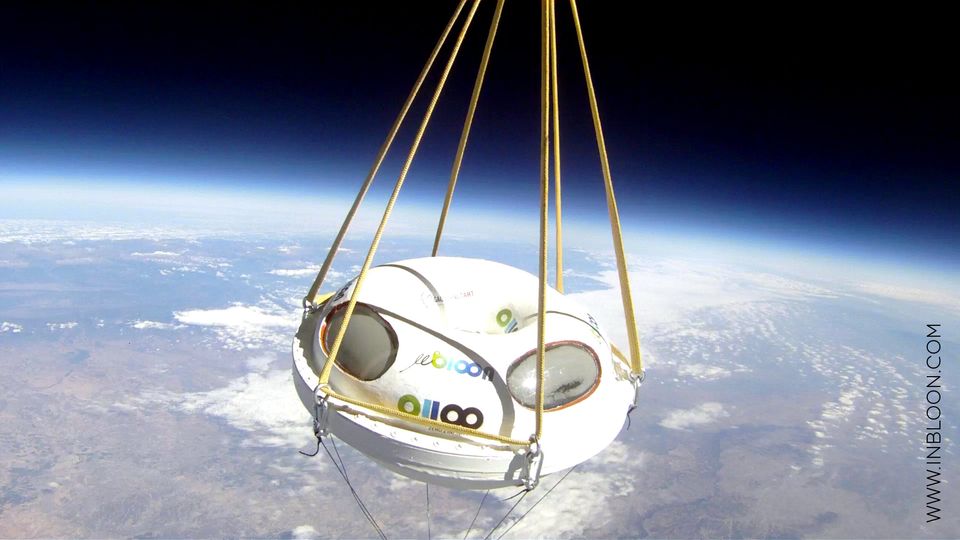 1 / 8
A photograph from one of the bloon's unmanned test flights.
Courtesy: zero2infinity - bloon