Apple design and NASA engineering have finally come together to make the Blossom One -- but it's not a sexy-looking space shuttle that's really easy to fly.

Named more like a rocket ship than a Mr. Coffee competitor, the Blossom One Limited is, in fact, a gorgeous, $11,000 coffee machine. And though I am not, I confess, as much of a "coffee person" as many of my caffeine-addled colleagues and friends, I must admit that, after an hour-long taste test in New York City, the Blossom One Limited coffee machine does indeed make -- excuse me -- a damn good cup of coffee.

An apparent improvement-by-miles on the simple, mundane kitchen coffee machine, the Blossom One Limited was designed and developed by three impressively-credentialed young coffeephiles -- all recent university grads with stints at Apple, NASA, BMW, and Tesla Motors on their collective résumés. .

Jeremy Kuempel, the president of Blossom, graduated from MIT in 2011 and has already had internships at BMW, Tesla Motors, and Apple, where he worked on the iPad 2.Matt Walliser Kuempel's partner and chief engineer, was scouted and hired for internships by NASA as a high school student due to his impressive work engineering robots for the burgeoning BattleBots scene. Lead Designer Joey Roth is already a well-respected design expert, whose speakers and innovative teapot are some of the most beautiful conceptual designs you'll ever see.

Together, the three wunderkinds have put their engineering smarts, design savvy, and CVs to use in an attempt to build, they say, the greatest coffee machine in the world.

The Blossom One Limited is the result of their labors. And while it's probably too expensive for your kitchen -- unless you can also afford elevators for your cars -- it appears to be a coffee-lover's dream machine, with a set of tools that could give baristas and artisans more control over the taste of their java.

The spark of inspiration for the Blossom One came, Kuempel told me, during an all-night homework session back at college in Boston. Having downed dozens of cups of coffee over several late nights and early mornings, Kuempel developed rather sensitive taste buds; and he realized that each cup of coffee he brewed tasted substantially different than the last, despite his using the same beans. He reasoned, then, that if he was to brew the Perfect Cup of Coffee -- one that would consistently satisfy his refined palate -- he was going to need more control over the process than his current machine offered.

And so Kuempel, then a thermodynamic engineering student at MIT, set out to define what was causing these slight variations in the quality of his coffee. After much experimentation, controlling for the beans and amount of water he was using, he found that there were essentially six variables in the coffee-making process that determine the flavor, aroma, and level of perfection of a given serving of joe. They are (get out your pad and paper, coffee snobs): temperature of the water; amount of agitation (stirring) over the course of the preparation; ratio of coffee to water; pressure; grind size; and amount of time the coffee is in contact with the water.

After searching high and low for a machine that could control all six variables individually, Kuempel found that no such device existed; and so he set out to build his own.

Here's how it works: A simple computer within the machine can be used to set each of the six individual variables from above according to a coffee-drinker's preferences. These can each be set by a knob on the front face, or you can quickly input the settings by scanning a QR code on certain bags of coffee. The built-in camera -- yes, the coffee machine has a 1.3 megapixel camera -- can scan the code (only the choicest bean growers are partners) and automatically set each variable. When you press "Go," the water is heated to your specified temperature, during which time you place your ground-up beans into the Portafilter on the underside of the front of the machine. Once the water is heated, the brew chamber unit fills itself and uses electrical heaters to maintain temperature at the set point, where a timer on the machine counts down the number of seconds you have allotted your coffee to steep. When that time is up, you press down the mixture with a plunger at the end of a lever, forcing the resultant cup of coffee down into your cup. 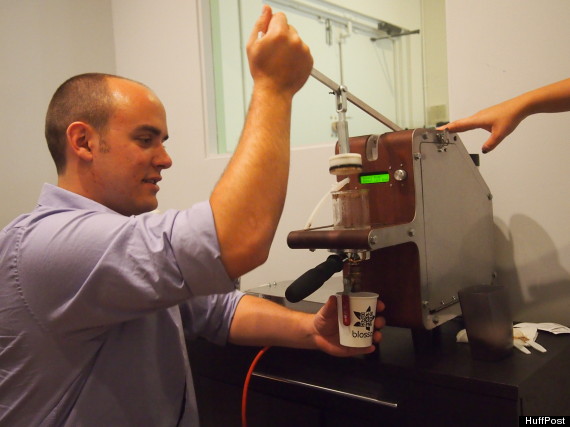 Kuempel dispenses the finished product at a recent meeting with HuffPost in New York City.

I drank two cups of coffee with Kuempel, brewed at 180 degrees Fahrenheit and 195 degrees Fahrenheit, respectively; and though both were damn good cups of coffee (and hot!), I confess that I could not distinguish the difference in quality between the two. When Kuempel asked me about the comparative bitterness, and acidity, and "fruit notes" in the two cups, I could only shrug. I'm the kind of guy who will gladly drink wine out of a cardboard box, so my palate is not so refined as Kuempel's. When I meekly offered to him that the second cup of coffee tasted less acidic than the first, Kuempel looked at me as though I had just committed some unforgivable faux pas.

Clearly, the Blossom One Limited is not being produced for rubes and hayseeds like me -- this bean-grinding Frankenstein is for serious café critics only. That is clear not just from Kuempel's hope that early adopters will be creative, adventurous baristas and high-quality specialty shops; but also because the Blossom One Limited is being limited (it's in the name, people) to an initial run of about 10, with a price of $11,111 for one of the first units. Kuempel's coffee monster is currently in prototype and he hopes to ship the first devices in Spring 2013.

While I will not be one of the initial buyers, I can see the appeal for a certain subset of coffee connoisseurs: The design is indeed beautiful, and the ability to customize the recipes ensures inventive brewers and baristas will be able to tinker their way to a signature cup of coffee, which they can then share with their customers and fans. One wonders if there will soon be star baristas, just as there are star vintners, patissiers, and Sushi chefs, emboldened by the Blossom and specialized appliances like it that allow for greater flexibility and experimentation with the beans.

You could be enjoying coffee from the Blossom One Limited at your hip local cafe soon, in other words. As I am not a "coffee person," I won't be joining you; rather, I'll be caffeinating myself the natural way: By drinking seven cans of Diet Coke before noon.

Check out a gallery of photos of the Blossom One Limited below:

The Blossom One Limited