An anti-Banksy & Co. street art show opened in Bologna, Italy, the same night as its controversial bank-backed cousin with brand new works by 50 or so Italian and international street artists and open admission to their outdoor "museum."

"It is free and spontaneous, as street art should be," says an organizer and participant named About Ponny as he describes the exuberant and sometimes saucy toned exhibition on the grounds of the sprawling former headquarters of Zincaturificio Bolognese which is destined for future demolition. 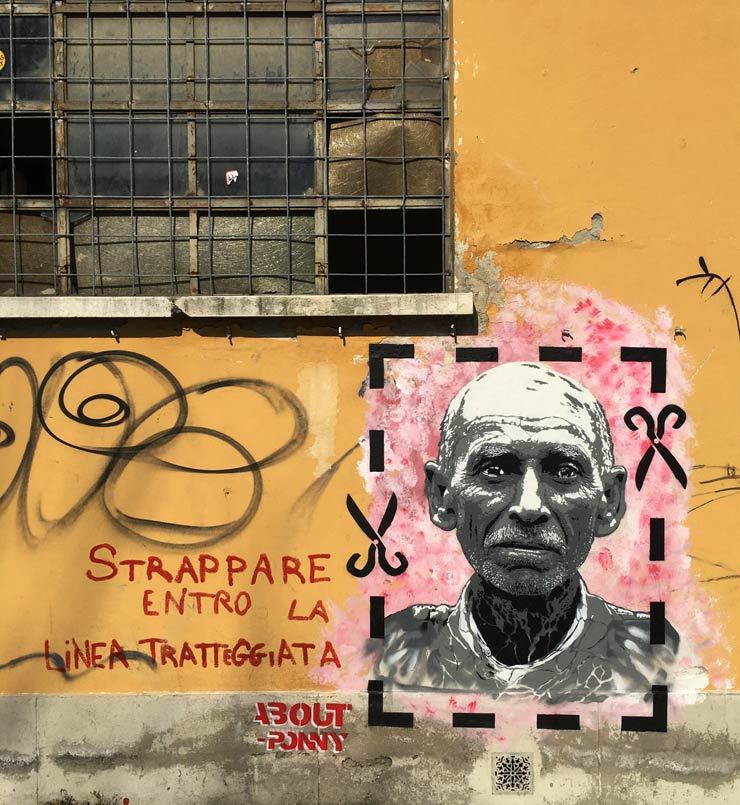 "The message we want to convey is that true street art is found where it was born, in the street and not in the paid exhibits," says Bibbito, who along with two other out-of-town street artists named Jamesboy and Enter/Exit found food and couches during their installations thanks to an association of artists called L'Associazione Serendippo. Together, these artists say, they and other organizers want to send a "strong signal" by creating "one of the largest museums of ephemeral street art ever made". The new coalition named this project "R.U.S.Co" ("Recupero Urbano Spazi Comuni" or "Urban Renewal Common Spaces").

The new 16,000-square-meter open-air art show may appear as a rather curious development because its method of protest runs completely counter to that of the shows' most vocal and high-profile critic, BLU, who last week protested the same show by defiantly destroying 20 years of his own public paintings, rather than making new ones. 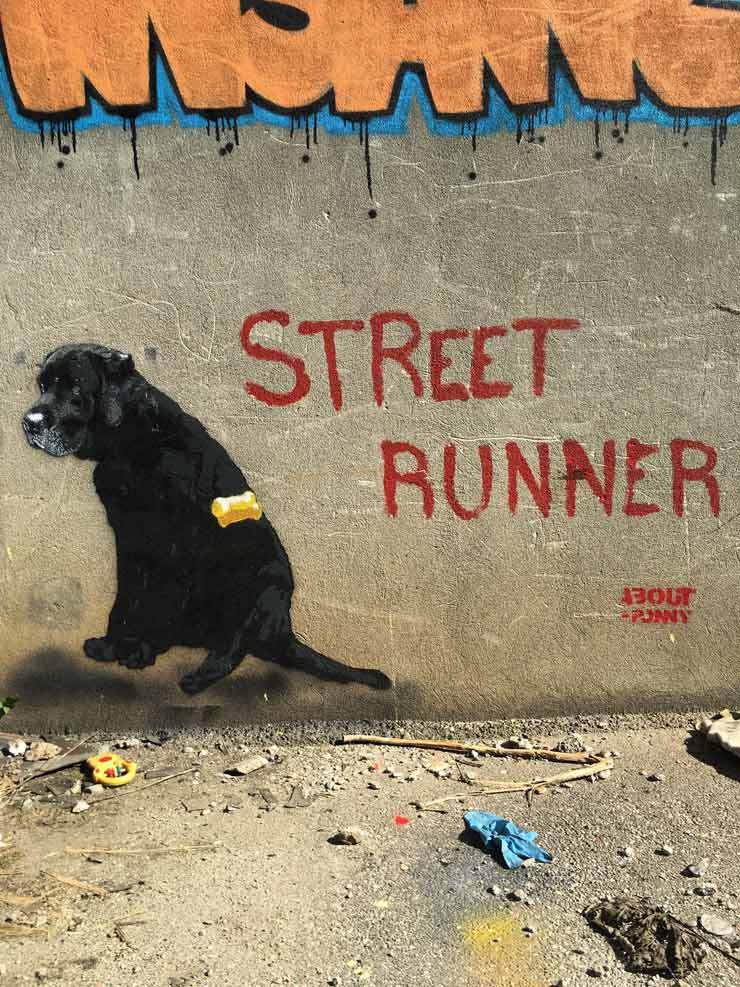 The contested Banksy and Co. exhibition contains, among many other works, walls removed from a privately owned abandoned building in Bologna that were painted by BLU. Displaying the walls and his artwork without his consent so angered the painter that he rallied artists and activists to help him snuff out all his remaining murals and paintings in this Northern Italian city last week. (See A BLU Buffer Talks About the Grey Action in Bologna.)

The heavily attended Friday night opening of "Street Art - Banksy & Co." at Palazzo Pepoli - Museo della Storia di Bologna was curated by Luca Ciancabilla, Christian Omodeo and Sean Corcoran and features roughly 250 historical and contemporary works spanning about fifty years and highlighting a number of movements within the so-called Urban Art genre. On balance it appears that 90 percent of the works are studio works, paintings, sculpture, videos, original sketches and ephemera and were probably collected in a more conventional way, and the tagged posters, stickers, metal doors, and wall fragments are viewed in the context of the whole scene. 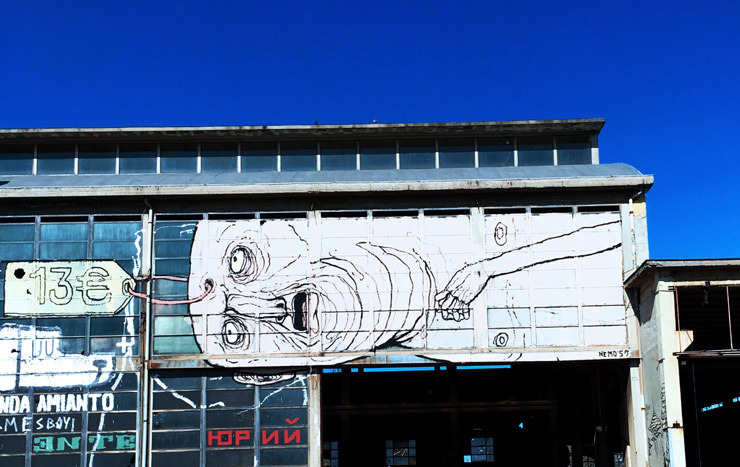 Of the counter exhibit, About Ponny says, "Many artists have participated. It's fantastic foray into an abandoned factory that maybe in the future will be demolished," on the metal production factory grounds that have laid unused for about 15 years. Completed over three weeks time with freshly painted pieces, many of the new works hint at the street artists' intentions to lampoon the formal museum show with a bit of sarcasm. Included in some of the pieces are overt references to the contested issues at hand, such as a portrait surrounded by a diagram of scissors and a dotted line by About Ponny and Nemo's large troubled and naked man pierced through the head with a price tag reading €13, the entrance fee for the museum show . 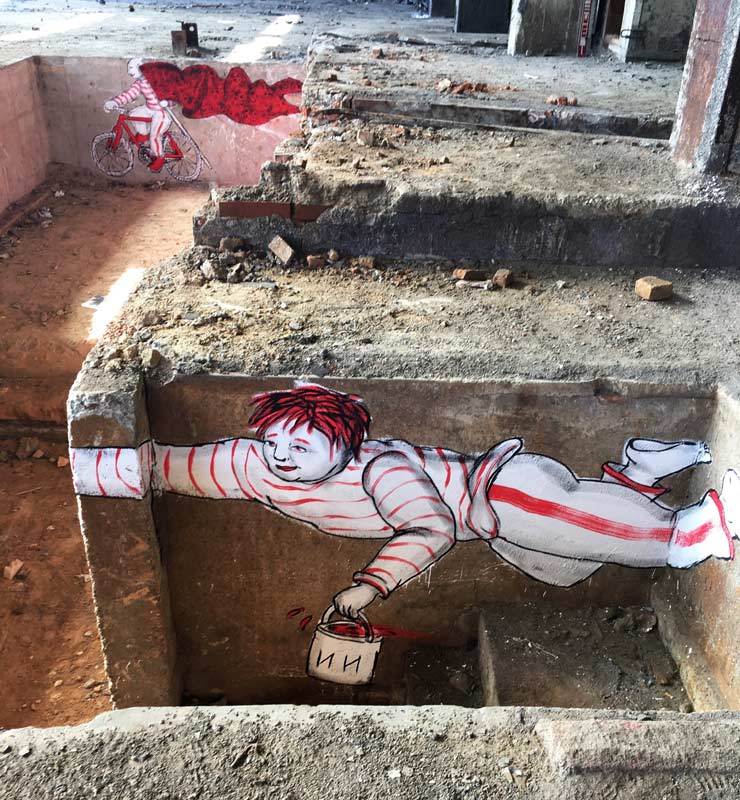 Attendance at the new outside show will be difficult to gauge as the facility is in such disrepair that organizers cannot encourage the public to attend it without putting people at risk because of safety matters. This method of art-making in abandoned places has been a cornerstone of the graffiti and street art practice since youth first started to chart their urban explorations and these new pieces seem perfectly at home on decaying walls and crumbling infrastructure, despite any possible dangers present. It is exactly this sometimes-idealized rebellious ethos that is offended by the practice of displaying this art in a more rarified environs. 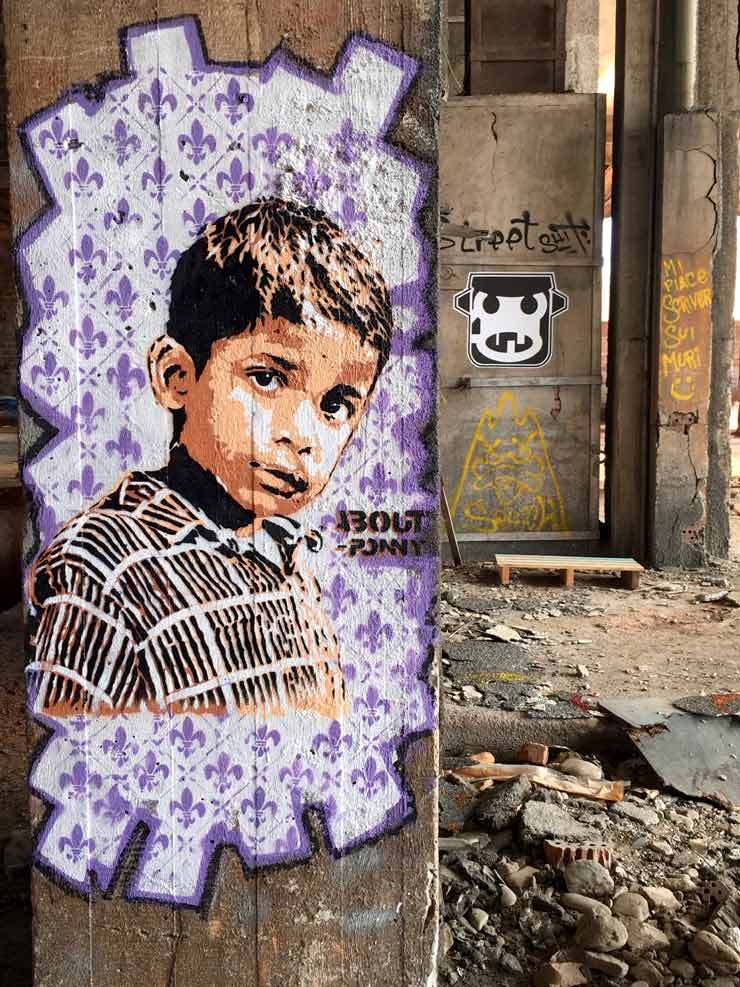 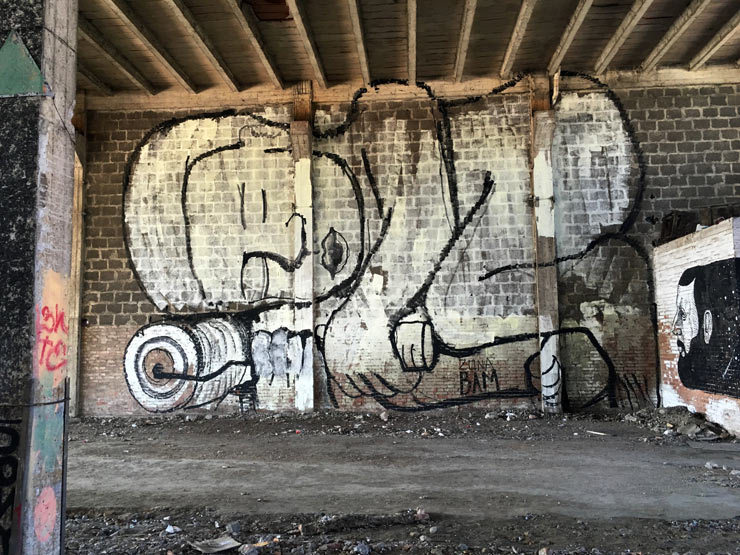 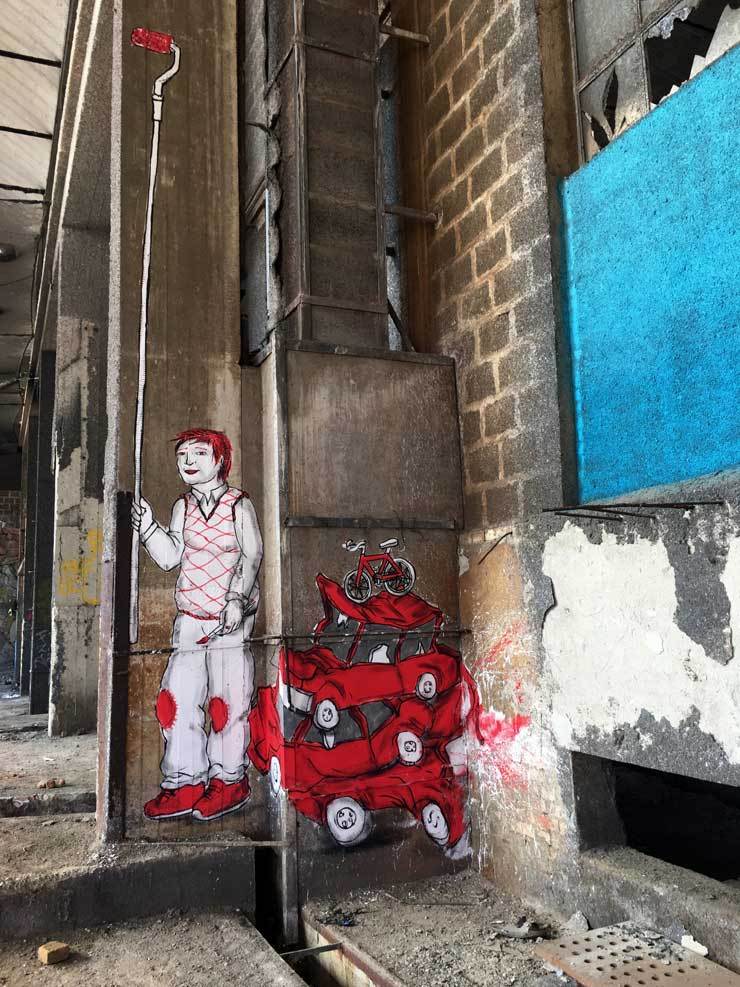 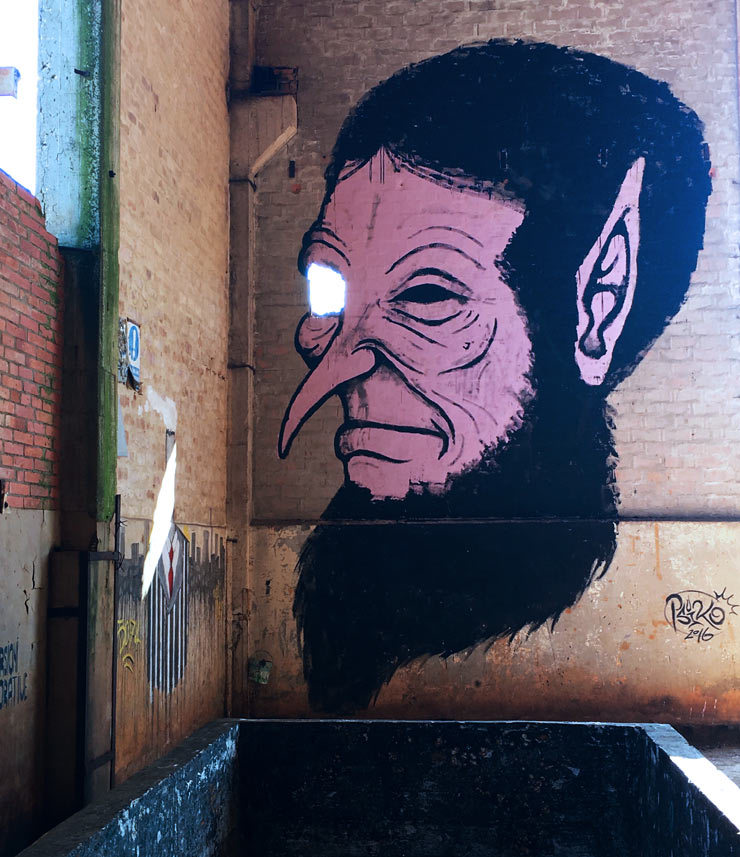 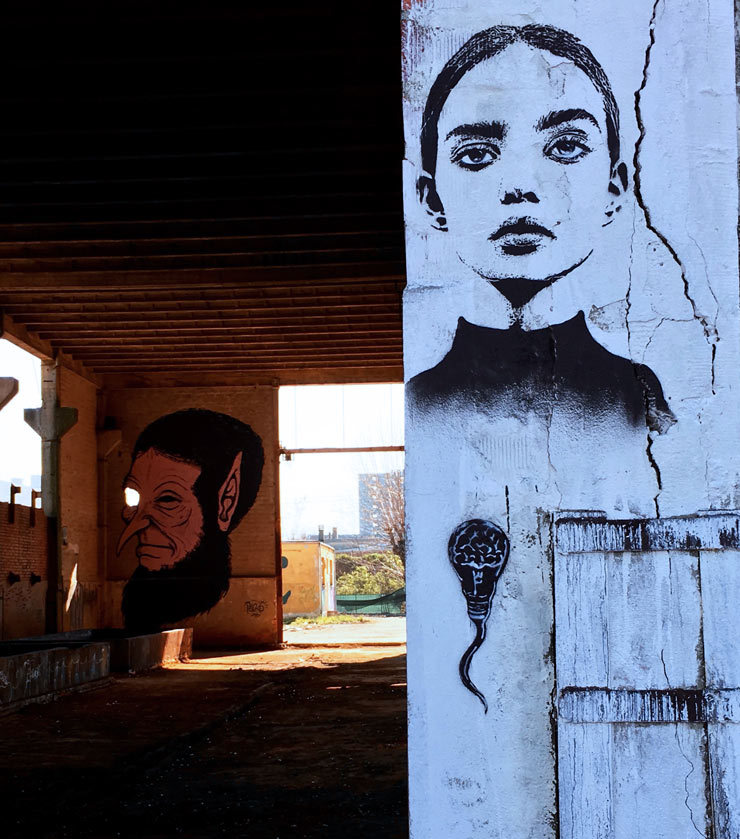 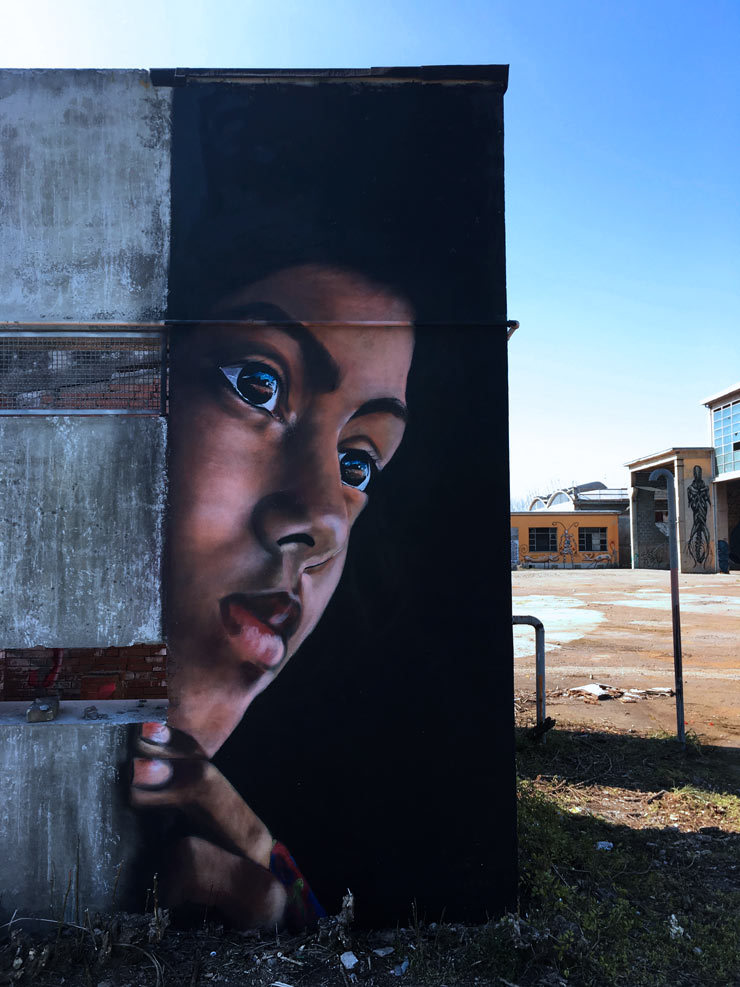 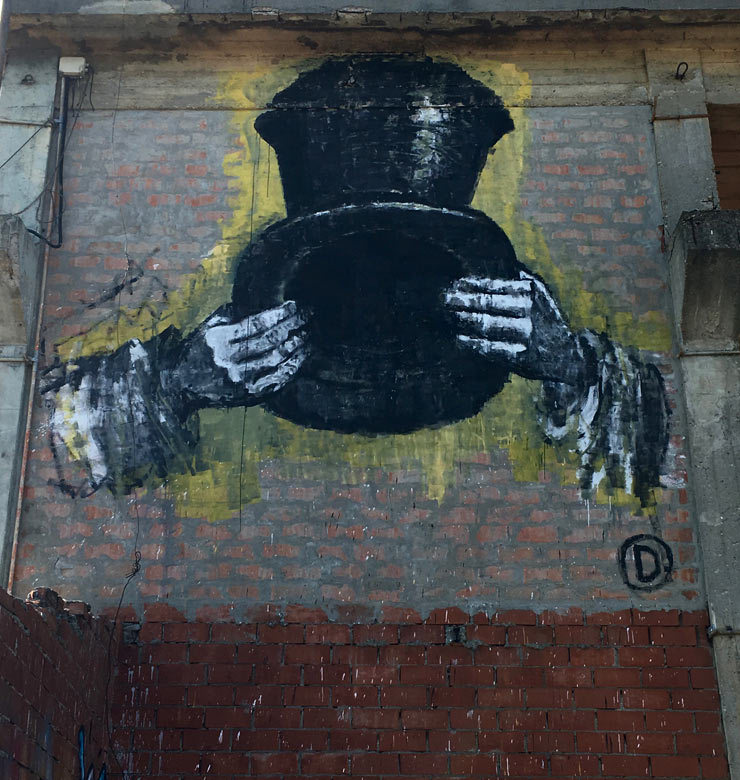 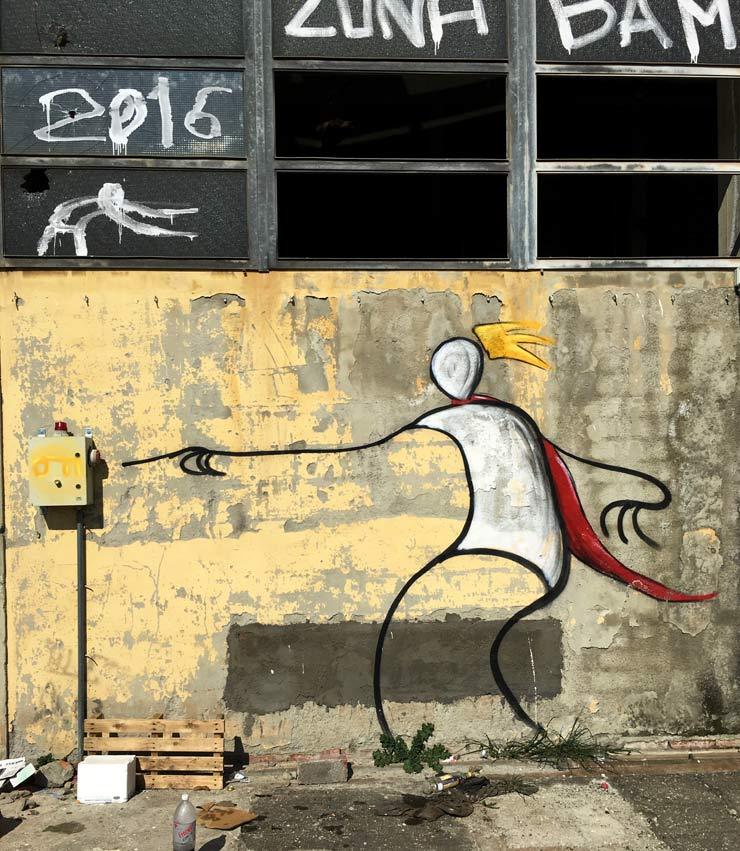 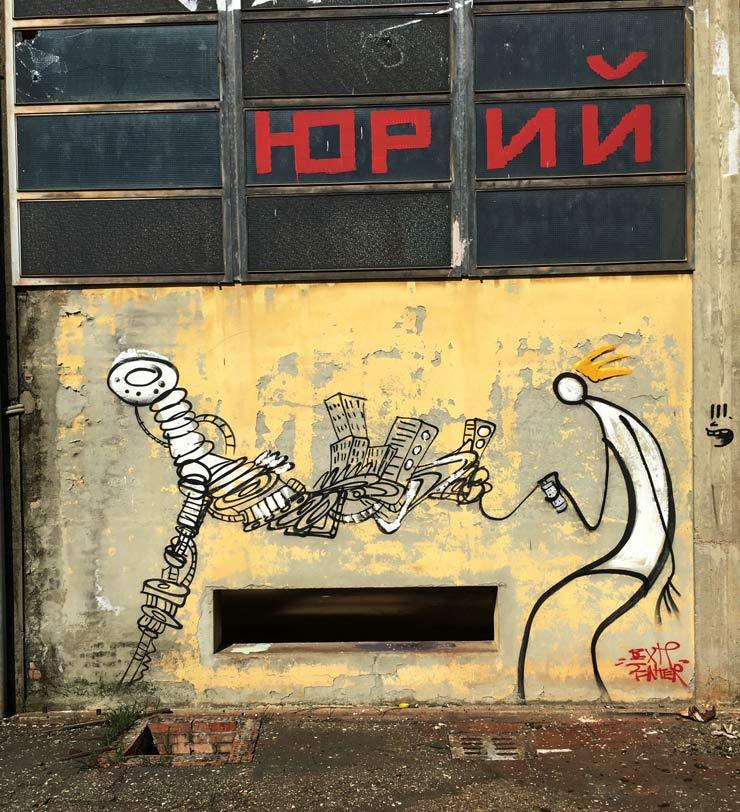 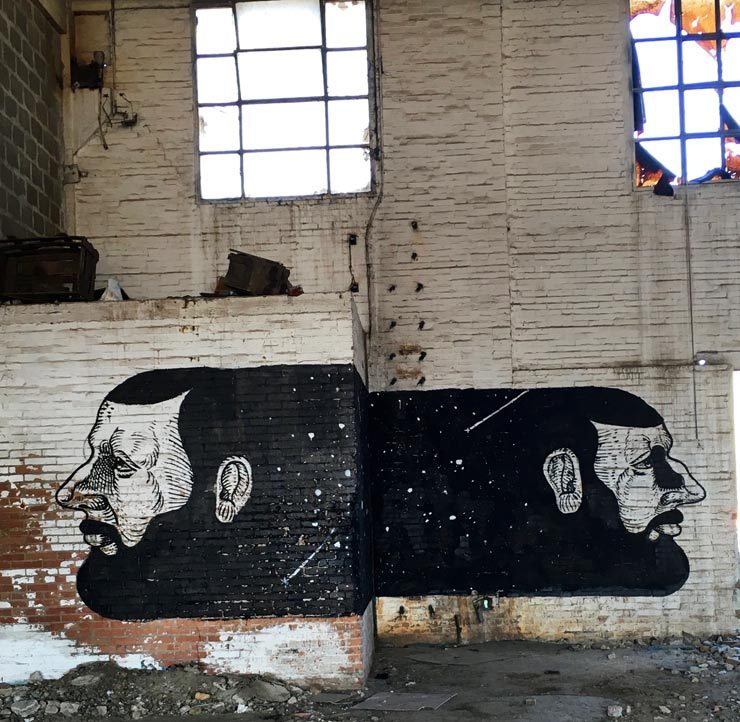 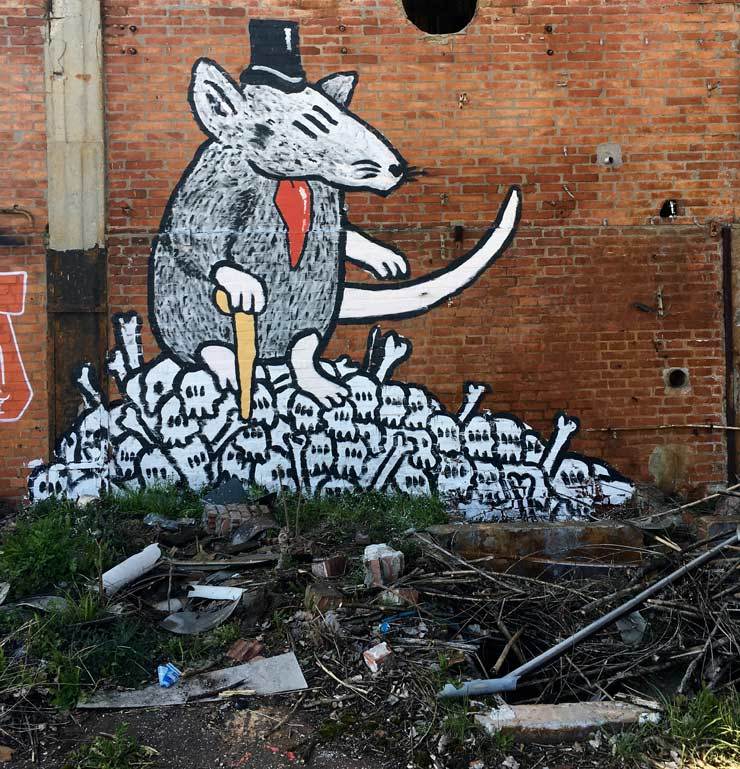 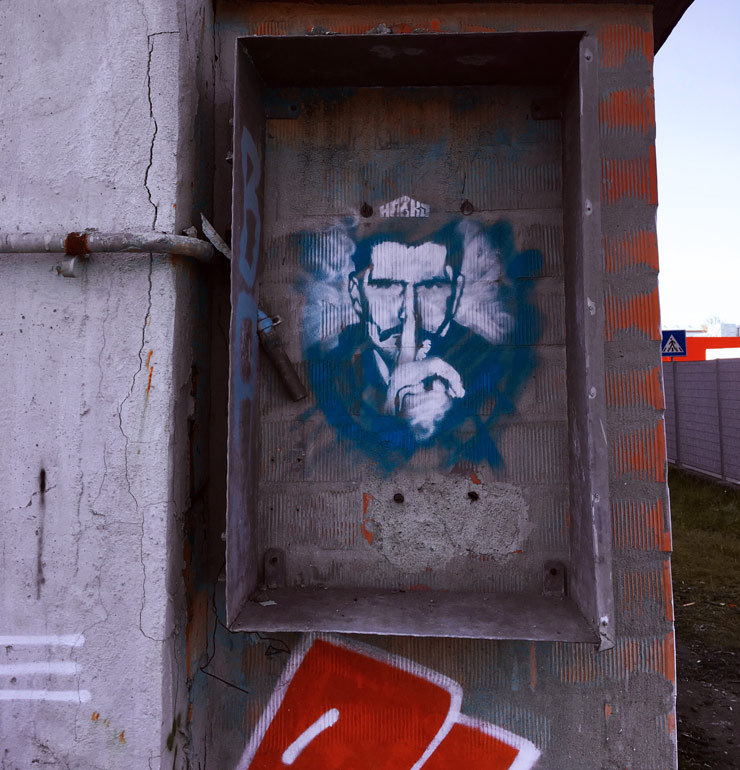 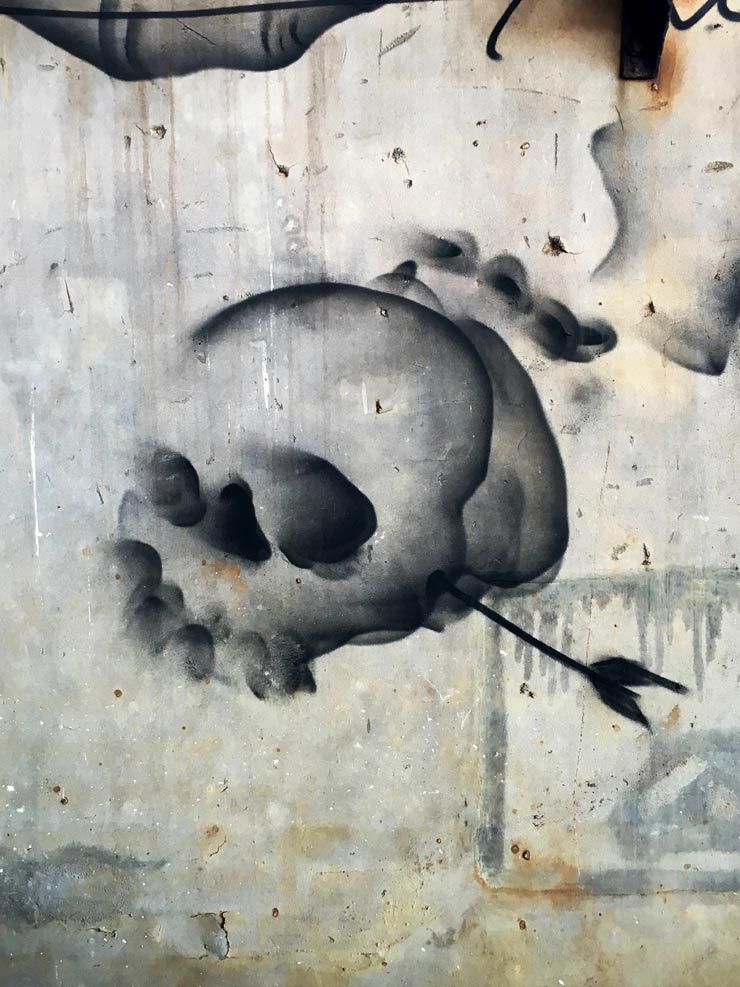 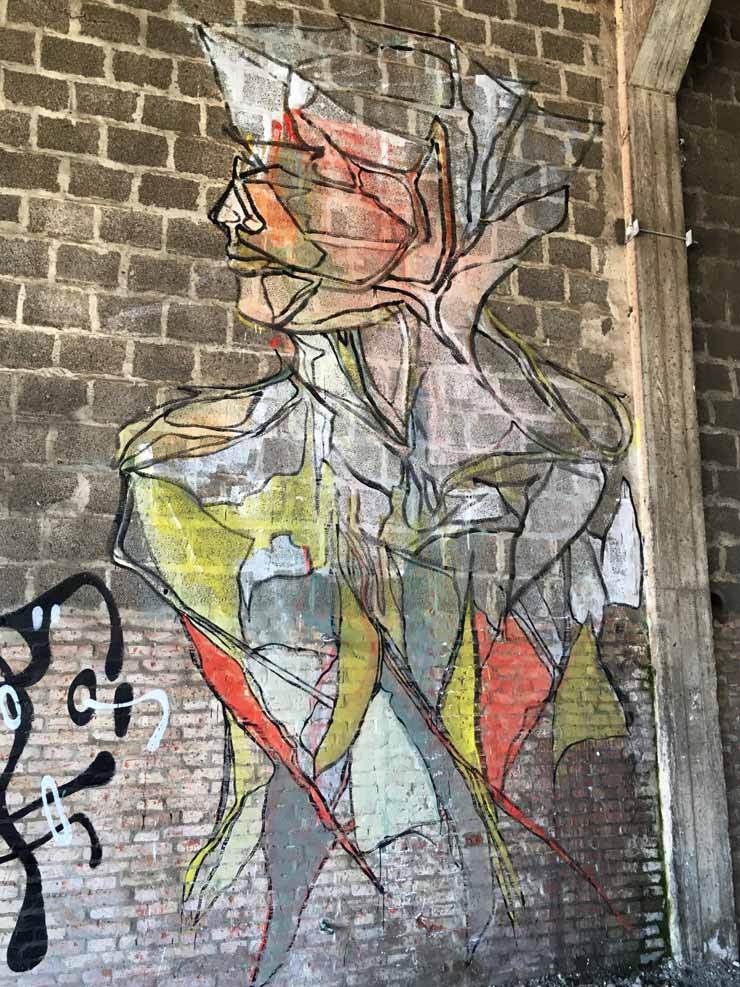 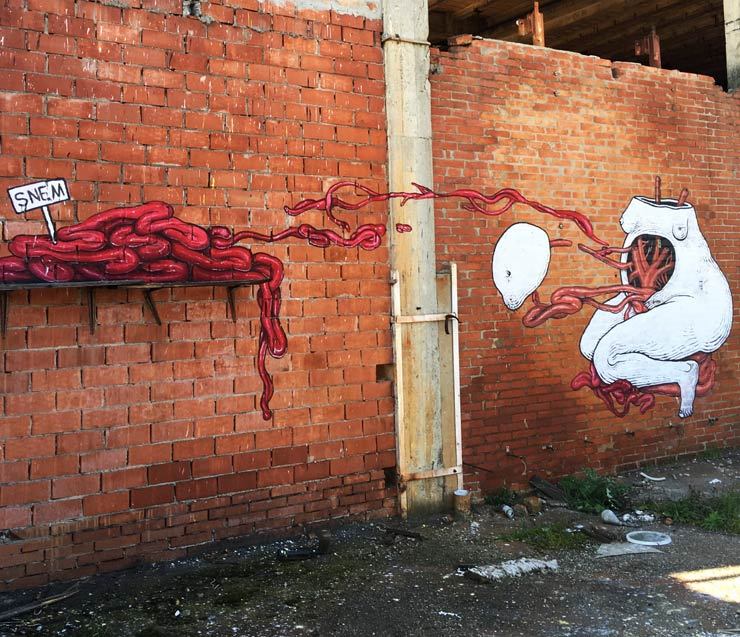 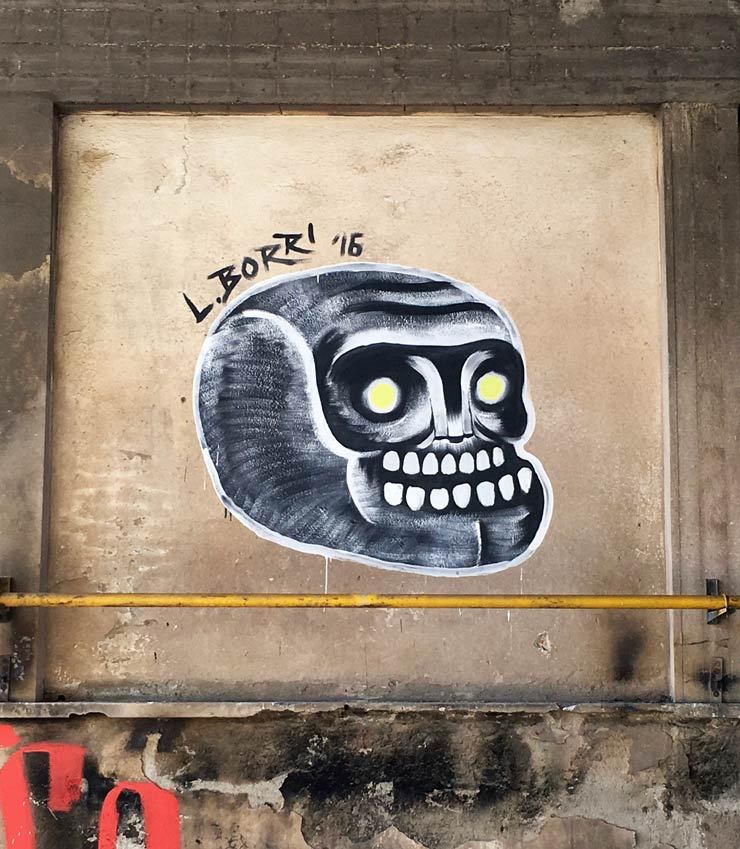 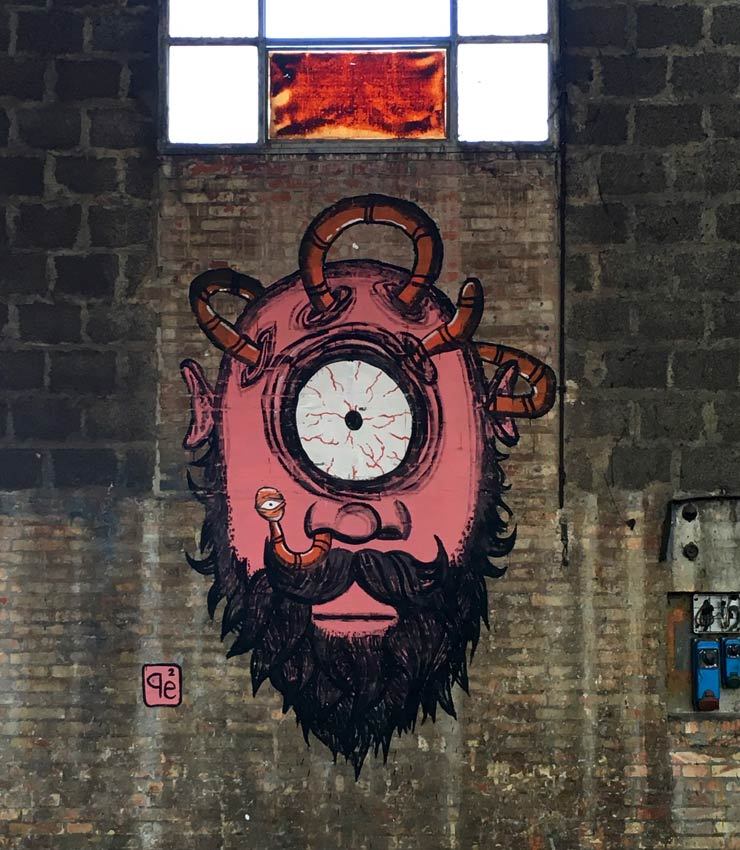 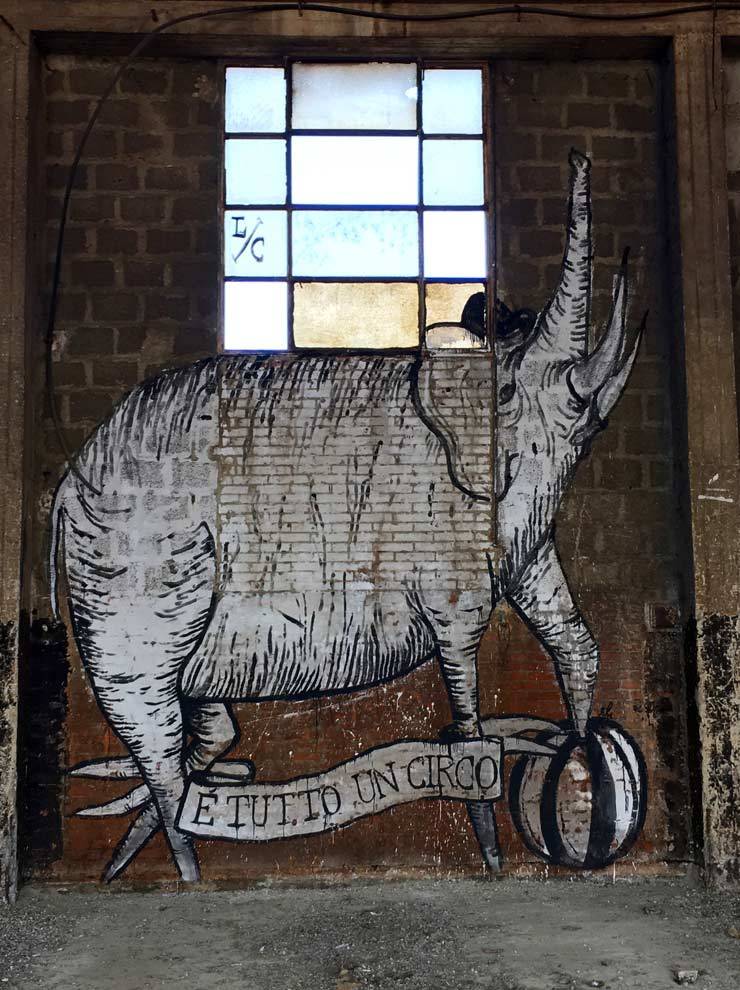 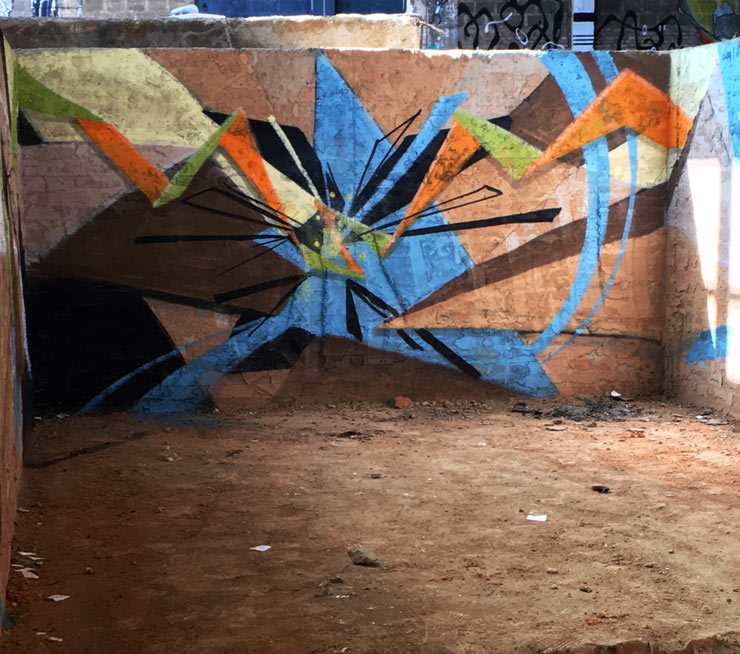 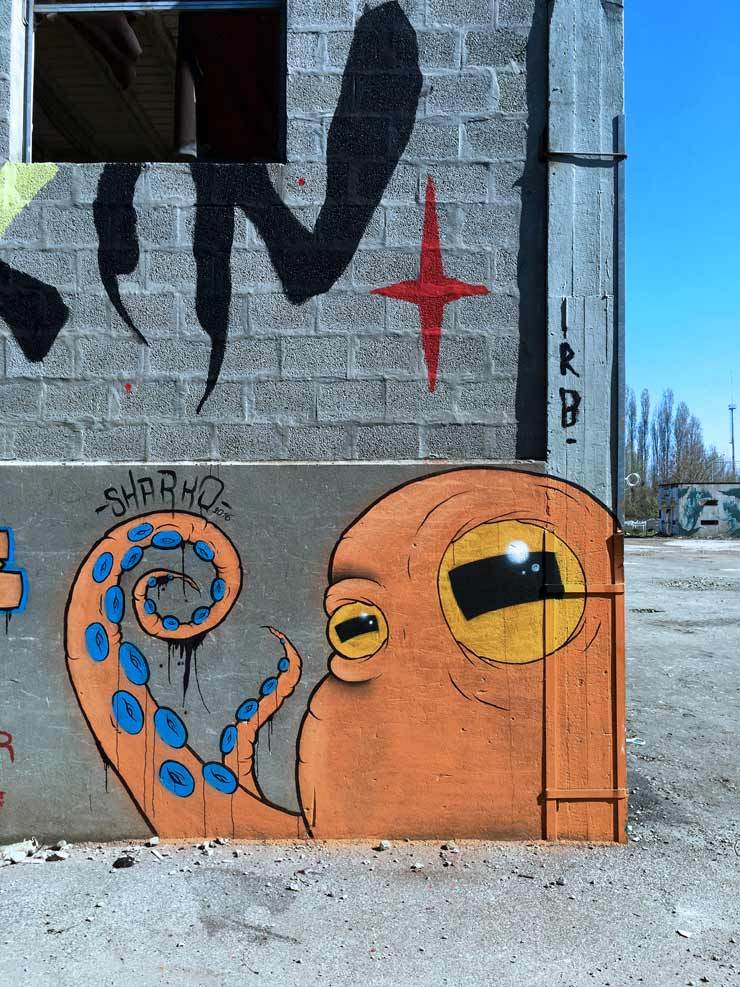 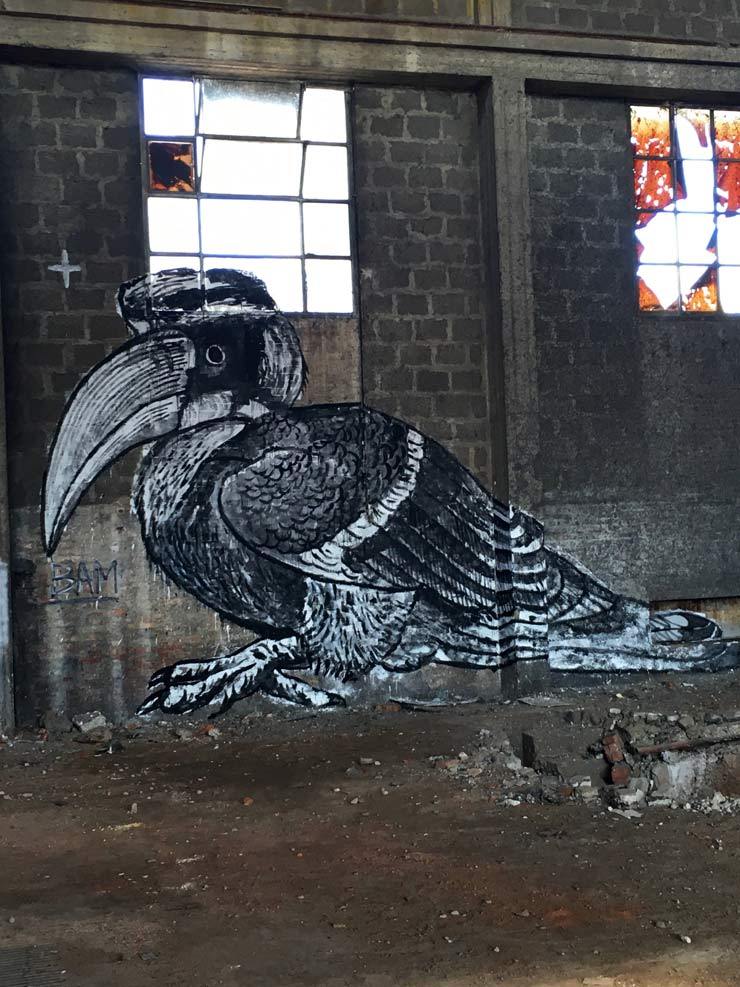 Our sincere thanks to About Ponny for taking the time to shoot exclusive photos for BSA for this article. Please follow About Ponny on Instagram at @around730