A fascinating new book by University of Virginia professor Timothy Beatley argues that while cities must continue to merge with the "green" -- by adding more trees, green roofs, and green buildings -- they can't ignore the "blue," our greater marine environment. This is because we, as humans, have a deep, biophilic connection to the oceanscape, which makes up 70 percent of the face of the Earth and contain 97 percent of its water. That connection is essential to building a more "complementary, mutually sustainable relationship between city and ocean." 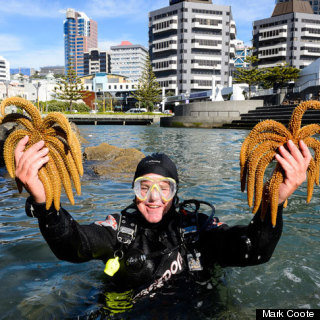 Dive instructor with sea stars in the Wellington harbor

Much of the inspiration for Blue Urbanism: Exploring Connections between Cities and Oceans came out of a fortuitous experience Beatley had in Perth, Australia. There, he witnessed how city dwellers, "under the right circumstances, can take on ocean conservation." A real estate developer wanted to build a massive hotel resort along the coast facing the vulnerable Ningaloo Reef. The spot proposed was apparently the "worst location for preserving marine biodiversity." Beatley was amazed by the collective sense of outrage, manifested in everything from bumper stickers to rallies and letter writing campaigns. Under pressure, the state's premier (similar to a U.S. governor) shut down the plans. Beatley says "this story has stayed with me as a remarkable example of how urbanites, even those hundreds of kilometers away, can care for and advocate on behalf of the ocean world."

The trick is turning all those good feelings about oceans and the charismatic sea creatures we all love (whales, sea turtles, sea stars, to name a few) into real urban policies and plans that protect oceans. Beatley points to a few examples of local governments that have taken the lead, from San Francisco, with its ban on plastic bags; to Hong Kong, with its burgeoning movement to stop the consumption of shark fins; to Wellington, New Zealand, which has forged a deep and sustainable connection with its coastal environment. Still, Beatley thinks most cities can go much further than they are now, creating "blue belts," to protect ocean spaces in the same way cities create designated "green belts" on land. 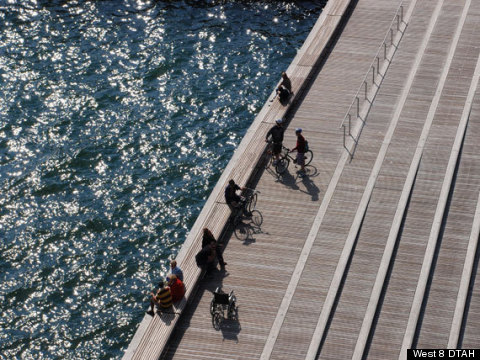 The world's oceans, and their rich coastal zones, are in dire need of protection. While ocean diversity is important in its own right, our protection of it is really self-interested. This is because our "urban future and ocean world are intimately connected in numerous ways." The world's oceans are major carbon sinks, soaking up 2 billion tons of CO2 annually. Ocean related jobs total 350 million worldwide. Seafood generates $108 billion in economic value, while eco-tourism to reefs creates another $9 billion alone. We also get energy from the ocean -- in the form of undersea oil deposits, and, hopefully, in the future, more offshore wind farms. Beatley says offshore wind farms could provide today's energy needs four times over, if we were smart. Oceans are also our main transportation channels. But all of these interactions with our oceans must be done in a more considered, sustainable fashion to prevent more of what Beatley calls "ocean sprawl," which negatively impact the "integrity of ocean ecosystems."

Ocean sprawl has had terrible impacts. Those huge gyres -- garbage patches -- will continue to grow for the next 500 years, even if we stop putting any plastic in the ocean right now. Coal-burning power plants send huge amounts of mercury into the oceans. Here's just one scary stat Beatley cites: "A recently released United Nations Environment Program report documents a doubling of mercury levels in the top 100 meters (300 feet) of ocean water over the past 100 years." Then, there are events like the Deepwater Horizon spill.

Too many cities don't understand their connection to oceans. Beatley explains how a number of local non-profits are trying to change that. In Seattle, a group called Beach Naturalists is helping locals understand the magic of their coastline. "The program trains several hundred volunteer naturalists in the ecology and life found in the intertidal zone, and these volunteers patrol the city's parks to help people understand more about life in tidal pools." And then there's the group called LA Waterkeeper, which aims to build awareness of the massive kelp forests just off the coast of Los Angeles. Did anyone know they were there?

Returning to Wellington, New Zealand, Beatley explains how that city has "created a new marine reserve on one of its shores, a marine education center providing children and adults alike the chance to touch and see marine organisms, the world's first marine bioblitz (engaging the citizens in the recording of marine biodiversity), and a powerful new vision of its 'blue belt,' a complement to its historic and prized greenbelt system."

Imagine if New York City, Toronto, Hong Kong -- and all the major coastal cities around the world -- took their marine environments as seriously as Wellington does, and actually extended the marine world into the city.