It's no blue dress, but it's pretty freaky all the same.

We're currently obsessed with this optical illusion, which comes to us by way of the Daily Mail Australia. Here's how it works: Stare at the white dot on the woman's nose for 15 seconds. Then gaze at the blank space to the right. 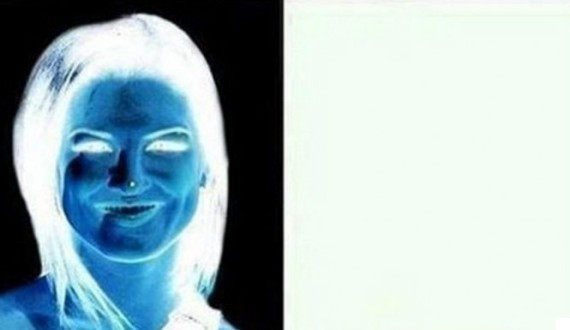 The illusion is the result of a negative afterimage.

Dr. Juno Kim of the University of NSW School of Optometry and Vision Science explained the concept last week to the Mail.

Humans have three channels for seeing color -- grayscale, red-green and blue-yellow -- that relay information from the back of the eye to the brain, Kim explained.

"When you look at something that, for example, is yellow for a long period of time, you stimulate the cells that are positively sensitive to yellow," he said.

But if those cells become over-stimulated -- say, from 15 seconds of staring at a fixed point -- then they won't immediately return to a normal state.

"When you then direct your gaze at a uniform background... the cell doesn't return to its resting activity, it goes much lower than that," Kim told the Mail.

In this case, the blue receptors in your eyes become fatigued, which then makes it easier to perceive the yellow tones you might see in the illusion of the woman's face.