This summer, I had the opportunity to travel to East Java in Indonesia to document some of its magnificent volcanic landscapes.

It was mainly my love for volcanoes which brought me there, which began as a childhood obsession only rivalled by space travel and dinosaurs.

I had been to Jakarta a few times in the past with my band Ladytron but never had the time to explore the volcano region, so it was definitely on my list of places to see in the future.

It was only when we touched down in Jakarta when my wife and I realised how much volcanoes affect air travel in Indonesia. One of the active ones, Mt Ruang, had erupted while we were in flight, and we were stranded in Jakarta without any way of reaching Bali, our first port of call. After 24hrs of frustration, we finally found a flight which had a space for us, but if the wind were to change, the ash cloud would endanger the plane, and the flight would have to be cancelled again. Luckily, the flight went ahead, and we made it to Bali, and I was even able to snap a picture of the errant volcano as we passed by.

Above: Mt Ruang, as seen from our plane.

I was specifically interested in visiting Kawah Ijen (Ijen Crater) to see the molten sulphur streams at night. I had discovered this phenomenon in 2009 on a vulcanology website and have wanted to go ever since. I like the idea of volcanoes being an unstable and volatile part of a landscape, and very different from the landscapes I have photographed in past, which are not as prone to such dramatic upheavals.

Mt Ijen is located on the eastern tip of Java close to the town of Banyuwangi.
Over the past two years, tourist traffic to Ijen has exploded. Ever since the images of 'blue lava' were shown in National Geographic, hundreds of tourists make the climb in organised groups to see the phenomenon. The tours start at 1am, and the fire is visible in the dark until the sun rises.
I wanted to see the place without crowds so I stayed behind after the tourists left and was able to explore the crater without any interruptions.

Above: Looking into Kawah Ijen. Plumes of sulphur gas rise from the crater floor.

The actual hike up to the crater is slow and laborious, but safe. Once you reach the crater and climb down, it gets trickier, with loose rock and steep drops. As you descend into the crater, clouds of sulphur dioxide impede breathing and sting your eyes. I made sure I had a respirator and goggles with me.

Kawah Ijen is home to the world's largest acid lake. It's pH value is around 0.5, which is equivalent to car battery acid. Of course I dipped my hands in without knowing this. (It was lovely and warm but I don't recommend a dip). The surrounding landscape is yellow from a thick crust of sulphur deposit, which contrasts with the bright turquoise of the lake.

Above: At the shore of the acid lake.

At the base of the crater, hot gas vents (called fumaroles) blow sulphur dioxide plumes which drift around the basin. It is here where molten sulphur drips from the vents and form streams. The blue fire happens when they combust, but they aren't visible under daylight.

The sulphur also solidifies into a bright yellow rock, which is then mined by hand by local miners. The miners load up baskets which weigh around 100kg (220lb) and carry them out of the crater and down the volcano where they sell it for around $8USD for two loads per day. It is backbreaking work and seeing these men do it put a lot of things into perspective for me. 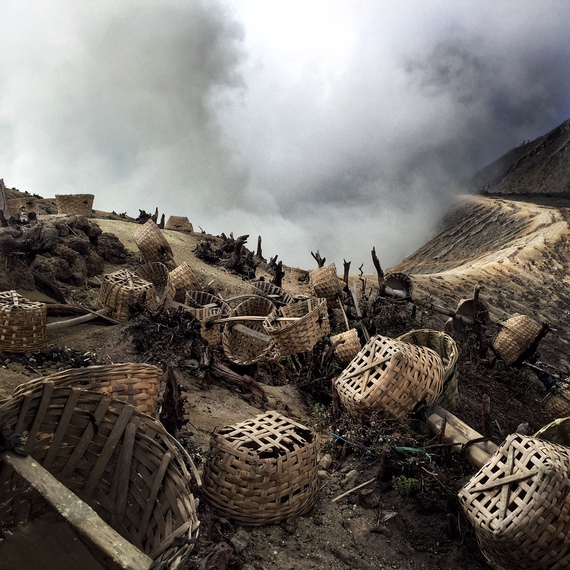 Above: The miners' baskets, left near the lip of the crater, after their day's work.

Above: Overlooking a cluster of fumaroles. 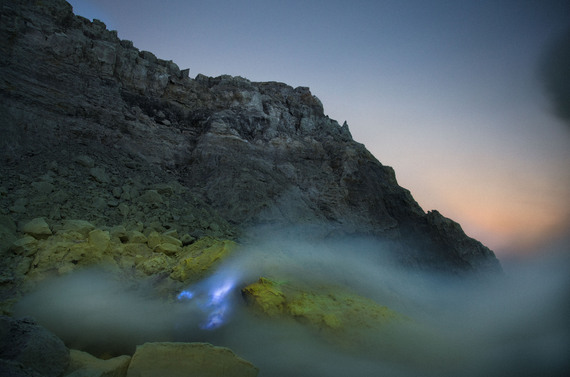 Above: Sulphur turns the landscape yellow

It was only after the sun went down when the burning sulphur streams became visible. And while I was gingerly making my way through a thick cloud of toxic gas, I finally found what I was searching for.

Setting up the camera and taking a photograph in these conditions wasn't easy. Other than having to use a tripod and doing a long exposure in the dark, the goggles made it difficult to compose the picture and focus the lens, and I was unable to properly look into the viewfinder. The gas cloud was also a problem because it regularly obscured everything around me.

It was so mesmerising to watch, I almost forgot I had a camera with me. 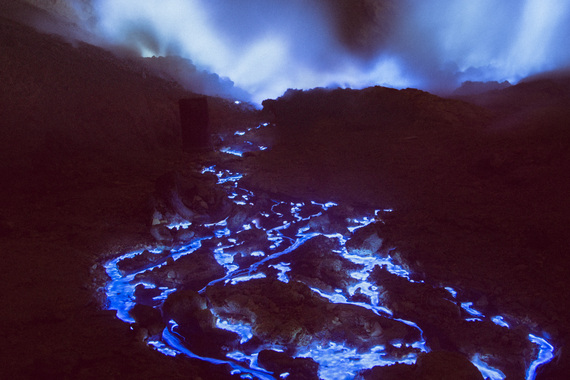 Our next destination was Mt Bromo and the Tengger Caldera, a few hours away by bus to the west. The Bromo massif is one of the most visited tourist attractions in East Java. The Tengger caldera is a huge cauldron-like bowl, in which the three main volcanoes (Bromo, Batuk and Semeru) are located. We stayed at a mountain village called Cemoro Lawang, nestled at the very lip of the caldera, overlooking the vast ash plain known as the 'Sea of Sand'.

From a vantage point on the other side of the caldera, I was able to watch the Kasada Yadnya festival celebration at the temple at the foot of Bromo. It was intriguing to observe the hubbub of human activity in the shadow of such an immense volcano. 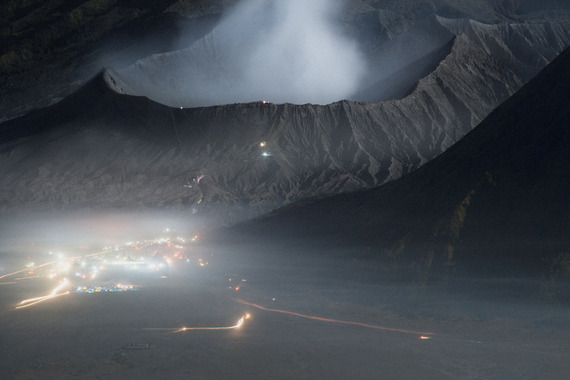 Above: The moon setting just before dawn

Above: The vast landscape at sunrise - Bromo (left), Batuk (front) and Semeru (back)

The viewpoint of the three volcanoes at sunrise is one of the most enduring natural images of Indonesia. There is a very specific vantage point where literally thousands of tourists are driven to every morning, and it is extremely congested and noisy from motorbikes, scooters, trucks and jeeps and the organised tours. We were lucky enough to find a lesser-known spot slightly lower in elevation but with a wider, less obstructed view of the same scenery. And while we were not alone when the photo was taken, I'm glad to say that the experience was actually in line with the sublime vision before our eyes. It really is worth doing your research in order to get the most out of your trip.

You can keep up with more of my travels on my Instagram, or my creative work on my website.