Astronomers may have just solved a mystery 10 billion years in the making.

It has to do with so-called "blue hook" stars, which have less than half the mass of the sun but burn 10 times hotter and are far more luminous. No one was ever able to explain the stars' unusual properties.

New research by an international team of astronomers holds that these super-hot stars are the product of long-ago collisions that destroyed the protostellar discs from which they arose.

The destruction of the discs caused the blue hook stars to rotate more rapidly than they otherwise would have, according to the research. That, in turn, affected the evolution of the stars, leaving them with unusually heavy cores that burn very brightly. 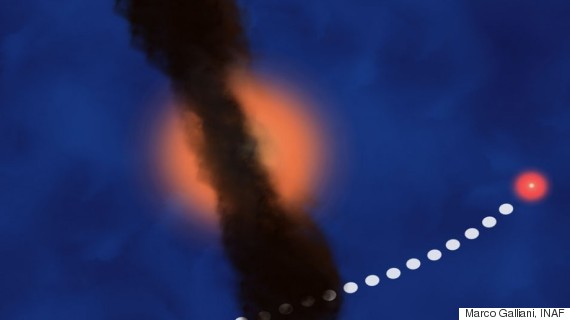 Artist's impression of a protostellar disc being disrupted by a collision.

What was it that collided with the discs? Other stars. After all, the star clusters in which blue hooks are believed to have formed were densely packed with stars.

"We've solved an old puzzle," study co-author Dr. Antonino Milone of the Australian National University School of Astronomy and Astrophysics in Canberra said in a written statement. "Our new explanation is quite simple, and it hangs together really nicely," added co-author Dr. Aaron Dotter, another researcher at the university.

To reach their conclusion, the team studied the globular cluster Omega Centauri, according to the statement. It contains about 10 million stars in close proximity to one another.

A paper describing the research was published online July 2 in the journal Nature.

CORRECTION: An earlier version of this article stated that Omega Centauri is the only star cluster visible to the naked eye. In fact, others, including the Pleiades, are visible without the help of binoculars or telescopes.