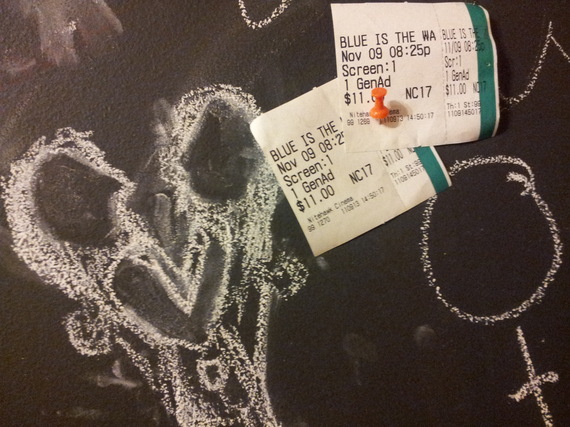 After 179 minutes of languidly sinking into her chest, her fingers lingering midway down my thigh, I walked out of the theater knowing that the evening had only just begun. As we gratuitously wandered down the street, she suggested that we get oysters. We laughed, mocking the film's not-so-subtle shellfish innuendo, and headed toward the Absinthe-and-oysters bar where we'd coincidentally had our first date. After spotting its crowded interior, we continued on down Bedford Ave. in search of the next best thing, sushi, but settled on Korean tapas.

Two glasses of Cabernet and a bowl of sesame seaweed later, we were full-on talking about sex. Lesbian sexuality. Sexual fluidity. Sex in the film. The sex we wanted to have with each other. Mostly the fact that the sex in the film more or less looks like the sex we were going to have later that evening. Our sex often starts with her pinning me down and slapping my ass. She really, really likes my ass -- a fetish that is apparently unbelievable, according to one mythical goddess of the queer blogosphere. (Should I have used a gender-neutral term? Is "G-d" gender-neutral, then?)

We concluded that the sex in Blue Is the Warmest Color is totally realistic, albeit intense. Their bodies are unruly, the lighting is jarring, and the scene feels authentic because you can see their imperfections.

I commend the bravery of the actresses; the sex is not slow, is not epically sensual, and does not conclude in a mere gentle embrace. The scene is not, and does not appear to have been, easily captured, and there is no vestige of safety. Instead, it focuses on carnal desire and moves beyond a conventional cinematic structure to vividly portray the couple's complex sexual dynamic.

What struck me the most about the initial sex scene in Blue Is the Warmest Color was not its length; all six minutes are magnificently warranted. Rather, it was the completeness of it. After years of watching and writing about queer cinema, this is the first film I've seen that attempts to expose a wide range of lesbian sexual practices and actually succeeds in clearly depicting the plethora of ways in which two women can move against, explore and feel one another's bodies during sex. The scene even concludes with the women in the position that they would have likely fallen into had they come to climax via tribbing (popularly known as "scissoring"), resting intertwined in one another's thighs as they catch their breath.

Forgoing clichés, the scene is not categorically arousing. Better yet, it is nothing short of mesmerizing. Throughout, it not only showcases Adèle's innocence and instinctual desires but foreshadows the power struggle induced by Emma's broad palate of sexual experience and her affected social class.

While the attack on director Abdellatif Kechiche's character may be valid (it's been said that his methods included brutal, often excruciating repetition during filming), one need only look at Adèle's face throughout the sexual encounter to realize that the emotional arc he achieves is brilliant; he succeeds in visually juxtaposing Adèle's sensitivity and introspective nature with her evolving penchant for passionate, hedonistic sex. From arousal to climax, no close up is too close, no position too jarring.

But unlike pornography, Kechiche's attention to the lips, fingertips, buttocks, neck, nipples and tongue adds sensuality and romance to an otherwise visceral and at times volatile, fast-paced scene. I respectfully, wholeheartedly disagree with the graphic novel's author, Julie Maroh, who has stated that Kechiche's heteronormative perspective results in a "mechanical" and "brutal" sex scene that lacks lesbian authenticity. Personally, I think the fact that he is a heterosexual man speaks volumes about his talent and his commitment to achieving what other directors often strive for: brutal realism.

In the end, the film begs for an analysis far beyond the typical articulation of "it falls prey to the male gaze and typical cinematic voyeurism." Unlike many other films, Blue Is the Warmest Color crosses into unfamiliar territory for an American audience that's used to seeing depictions of lesbian sexuality that privilege sensuality over sexuality. It is no surprise, then, that some people interpret the sex scene as unrealistic and pornographic; compared with lesbian sexuality as popularized by Pretty Little Liars and Glee, it sure is!

To my knowledge, no other narrative feature depicts lesbian eroticism quite like Blue Is the Warmest Color does. Its no-frills approach pushes boundaries and sets the bar high for all future portrayals of lesbian sex in film.

Ultimately, over the course of three hours, one must be willing to trust, discover and indulge in a whirlwind of confusion, passion, pleasure and pain, a patently queer emotional tornado, that serves as the driving force behind the film's bold and poignant coming-of-age narrative.

Fact: Kechiche is a heterosexual man who directed a film with a sex scene that features explicit depictions of women having sex with women.

Opinion: The sex is legitimately lesbian sex regardless of who directed it. Whether or not he consulted with a lesbian about lesbian sex is simply irrelevant.

Opinion: Instead of complaining, "He should have consulted a lesbian!" and making futile accusations that "he directed it wrong," a more productive conversation would be to consider whether there really is any "right" way to have sex.

Fact: There are not enough films featuring LGBTQ sexuality, yet dozens of filmmakers are campaigning on crowdfunding sites to make films by and for our community.

Opinion: If you have a problem with existing queer cinema and are especially frustrated by how few films are directed by women, then be proactive and put your money where your mouth is. Support queer filmmakers by donating to a crowdfunding campaign! More funding means more queer films for you.

A rhetorical question for the road: Why waste energy demeaning, debasing, or looking down on other people's vision, experiences, or interpretations of lesbian sex, especially within the context of such a beautifully crafted film? Can we not simply appreciate Blue Is the Warmest Color for the brilliantly scripted, aesthetically meticulous, emotionally raw film that it is?

An open letter to address confusion about lesbian sex and the scissoring obsession:

Here's the truth: I am tired of hearing people (and especially queer people -- you should know better!) and articles claim that a major part of my sex life either isn't possible or doesn't constitute "real" lesbian sex when in fact it is very possible. It is absolutely mind-blowing, intimate, passionate, sexy, dirty, hot, and intensely pleasurable and has been part of my personal sexual repertoire for about 10 years now.

Obsess no longer, because I am telling you now: It's real.