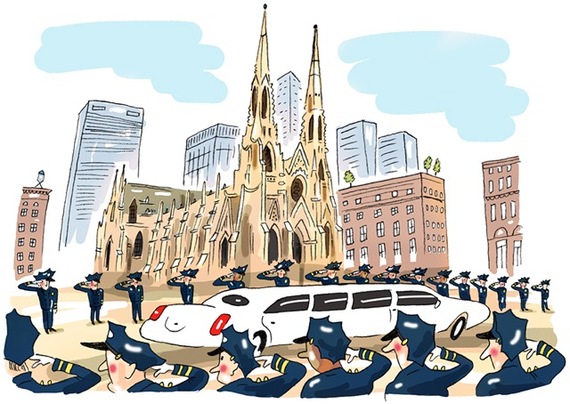 Euless, Texas. March 2016. Police receive a 911 call. "Shots Fired" in a park near a school. Immediately, the school is locked down and police rush to the park. Officer David Hofer hears the call and decides to back up his buddies. He is first to get to the park. Waiting for him is a shooter, who has hidden himself with a supply of loaded weapons. David spots the man and directs him to show his hands. Instead, the deranged man shoots David in the head. Moments later the other officers shoot the man, a drug addict. But it is too late. Only 29, David Hofer is dead. He never drew his pistol.

David was the son of friends of mine. The Friday before his death he had flown to New Jersey to celebrate a surprise birthday party for his father. He and his fiancée had just bought a house. Their wedding date was set.

David did not take the obvious route to become a police officer. He was born into a liberal, academic family, attended private school in Brooklyn, where he studied Chinese, and later New York University. But, after 9/11, he decided to serve his community. He worked as an auxiliary police officer in New York City, at a time when two similar volunteers were shot and killed. He then joined the force -- but concluded that it would be safer to start his family in Euless, Texas.

David's parents are escorted by police from New Jersey to Texas and then to the local stadium to pay their final respects to David. Along the way thousands line up to greet the funeral procession, waving flags or standing solemnly, hand over heart. At the end of the moving ceremony, which I decided to follow on television, a riderless horse, with the boots turned backwards in the stirrups, is led through the stadium.

The next day I go to Saint Patrick's Cathedral in New York for a second ceremony. The huge cathedral is packed with hundreds of colleagues of David in uniform, their faces taut with tension and grief.

Posters that read Blue Lives Matter are on each pillar. Monsignor Ritchie points out in his sermon that any police officer in the country could be the victim today -- a fact that they are only too aware of.

The service ends with a bagpiper playing mournfully. Traffic on Fifth Avenue is shut down. The extended white limo containing the family drives slowly past a cordon of saluting officers. His friends.

A few weeks after the funeral, David's sister Meret Hofer speaks about her feelings about what happened in an emotional post on a memorial blog for her brother. "David did not die because he made a bad decision or took an unnecessary risk," she explains. "He did not die because he didn't have enough training or adequate equipment. He died because he wore a uniform."

She continues, "Many have been tempted to mourn his loss as an exceptional officer in an otherwise problematic institution. This is a mistake."

Meret says, "There are countless reasons why my brother should be alive today, chief among them to give lessons to us all about how to care for one another. Yet, in that regard my brother is not an exception. There are many caring police officers who do good in an incredibly challenging profession. Unfortunately, we tend not to honor these officers. Rather, what makes the news out of the millions of positive interactions officers have with people daily are the very small number of these interactions that devolve into an abuse of power. Most officers want to and do do their jobs well. They want to keep our streets safe. They want to help those who need help. They want to solve problems in their communities. However, instead of becoming teachers or social workers or psychologists, they chose to make a difference as a first responder, navigating the acute emergencies and difficulties that crop up in each of our lives."

At a gathering after the memorial service in NYC, one officer made a futile attempt to understand this tragedy. He couldn't. Confused, he could only say: "He loved everyone and everyone loved him: black or white, young or old, rich or poor. He could reach everyone. My brother's gift was his ease at bridging the gaps between people. He just happened to be wearing a uniform while doing this job."

Meret believes that "We need dedicated first responders in order to help and protect our communities. If we are to promote healing between law enforcement and the communities they serve, we cannot allow ourselves to be guided by negative assumptions about what it means to wear a uniform, just as we cannot allow ourselves to be guided by assumptions about what it means to come from a certain zip code or have a certain skin color. The willingness to heal has to come from each one of us. We are only presented with the images and stories that represent the polarizing extremes: a cop being killed; a cop behaving badly. But, life happens mostly in between and that is where the acts of kindness are, unknown to most of us."

At the end of the funeral service in Texas, David's father said to the packed stadium, "Whoever believes that the safety of our children is a cause worth fighting for, please stand up to honor my son."