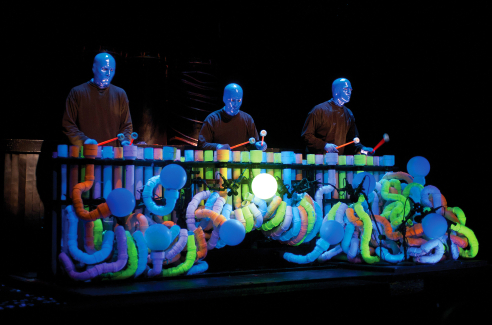 A Blue Man Group performance is definitely one of those things that you can never really imagine what it's going to be like until you actually experience it. With no spoken language, its universality is its milieu. Through sound, art, and technology, the Blue Man Group flip the script on our social norms and remind us all that we are all in this world together, so let's make this world a better place.

The theatrical tour of Blue Man Group is hitting Detroit for a limited amount of engagements at the Fisher Theatre from April 21-26. Recently, I was able to chat with the Blue Man Group's Music Director and percussionist Jessie Nolan about the collaborative aspects of the production. Nolan has been with the Blue Man Group for about four years now starting as a drummer with the Chicago production then adding the Music Director role as a part of the Norwegian Epic Cruise performances on through to the theatrical touring company.

As the Music Director, what are your duties?
As the Music Director, my gig is to manage the team of musicians, and to oversee the musical aesthetic of the production. It's a very collaborative environment, extremely collaborative process. I also have the privilege of working with people on the technical side and on the production side of the show to make sure the cog in the wheel are turning. I'm the local music cog in the wheel. I'm the onsite music guy.

Speak about that heavy collaborative effort that exists within Blue Man Group.
Collaboration is absolutely fundamental and is one of the lifebloods of the company. Just from a presentation standpoint, there's always three Blue Men, and three is the smallest number that constitutions a group, and within a group, there are much more complex relationships than with two people. That complexity and the ability for the company to tap into that sense of collaboration and to the talents of all of its employees is absolutely essential to our productions, to even function as an organization. It's an incredibly collaborative place to work. Because of that, it's a lot of fun. Everybody's opinion is valued as long as it's given in a respectful way and the shows are better for it.

Blue Man Group has been around for a long time now. How do they keep the production fresh after all these years?
Part of the way we keep our productions fresh is by responding to the changes of the times. We routinely update pieces in our show. We update content and material. It's not unusual to remove a particular moment or piece from a show if the creative team doesn't feel like it's landing anymore because something has changed in culture. So we try to respond to popular culture and to society, but another way that we keep it fresh is through that sense of collaboration. We're always writing and always composing new material, and always trying to create new things to wow our audiences. There is always that ever-present sense of dynamic change that's always happening. I think that's one of the reasons that people keep coming back to see the show.

How are new ideas presented to the creative team?
It's not so much as a presentation, but much more of an organic process. For example, we might be performing a piece in the show every single night and somebody might try something different, improvise. One of the band members might improvise a melody slightly different or the drummer might change the dynamic. Our shows are very much about being in the moment and our job, as a band, is to honestly respond to the story and the emotions and the energy that's happening every moment with the crowd and with our Blue Men. From any given night, that can change. Sometimes, we may play a section of music particularly quiet and the next night it might be loud, or faster or slower, or a slightly different drum groove or feel. What happens sometimes, we do that and we feel that it works, and maybe we try it again and over the course of time that idea gets refined and eventually may become part of the company-wide music template. Its not so much of presentation process of I wrote this piece and I have an idea, but it's much more of a things get worked out throughout the performance of the show. We use the show as a vehicle for creation. It's a beautiful thing.

What's the overall message of the Blue Man Group production?
That's always a tough question. I think the show really strives to remind us that humans have a basic need to connect in the most general sense. Aside from the comedy and the music and the lights and the sounds and the colors and the infusion of art and popular culture into the show, really what it's about is the audience and the Blue Men connecting with each other, and amongst themselves. There are a lot of connections that happen in the audience between people in the audience because the show makes them laugh, because it makes them get on their feet and dance. They notice the person next to them rather than sitting there focused on the show not really paying attention to the people in the audience, and obviously vice-versa, the Blue Men certainly notice the audience. I've always felt that on its face its really about that connection, and it's that connection that makes every show unique because we connect with each audience differently whether its an audience in the same city or different city.

How do you feel those connections mirror society in general?
I think the connections in the show are the exact opposite of the way that society is going, and we actually poke fun a little bit at that in the show in terms of not necessarily our dependence, but our fascination maybe with technology that's makes us keep from connecting with the people that are in same room with us and instead we are connecting with people across the globe while we're sitting next to someone in a coffee shop that we could be having a conversation with. The show encourages people to take off the mask that they wear everyday in their life, the face that they put on when they go outside. The Blue Man character is in a way the "every man" or that mask is stripped away because people don't see him as human. They can portray this very dynamic, inquisitive character that if they were not in costume they would be breaking social norms. It's that very personal moment, those connections that happen at the show that remind us that we have that need to connect directly with someone in the flesh, and hopefully encourage people to do a little bit more of that and shed that social persona or mask that they wear when they encounter other people.

What's your favorite moment of the show?
I have two favorite moments in the show. One, there's a piece in the show where our Blue Men go out into the crowd and they pick a few members of the audience to come up and share in the fun of the show. They are all real people, nobody's a plant. That's what's exciting for me getting to work with the band to create a sonic landscape for the Blue Men to move through while they are picking someone from the audience. Every single moment, every night this moment is completely different. It really forces us to connect with our cast mates, the Blue Men, and also with the audience and the energy and the feel that the story is bringing. Another favorite moment is right in the center of the show is the first time that the band and the Blue Men all play a musical piece together where we are all playing a musical instrument. There all many times in the show where the Blue Men are going through this story of the show, the piece on stage while their not playing, while only the band is playing. There's one piece in the show that we call "PVC4" where we all play together and it's a really an exuberant moment where you get to experience the full musical onslaught of a Blue Man Group show.

The Blue Man Group theatrical tour will be coming to Detroit from a limited amount of performances from April 21- 26 at the Fisher Theatre. For more information and to purchase tickets, visit broadwayindetroit.com.