This month's full moon, which rises on Tuesday (Aug. 20), is not just a Blue Moon — it's also the Full Sturgeon Moon, the Full Red Moon, the Green Corn Moon and the Grain Moon.

Today's full moon qualifies as a Blue Moon because it's the third full moon in a season with four (most seasons have only three). Historically, there have been two different definitions of a Blue Moon.

Technically, a Blue Moon is the third full moon in a four-full-moon season. However, a 1946 article in "Sky & Telescope" magazine mistakenly defined it as the second full moon in a single month (since most months have only one full moon), and the definition stuck. Because August will have just this one full moon, it wouldn't meet the mistaken, though commonly used, definition, though it does qualify as a technical Blue Moon. [10 Surprising Moon Facts]

The moon's extra names come from traditional monikers for the full moon of a given month. A few hundred years ago, Native American tribes in what's now the northeastern United States kept track of seasons by ascribing particular names to each full moon. Later, European settlers added their own names for the full moons to the lexicon.

The annual August full moon has come to be known as the Full Sturgeon Moon, because the large fish called sturgeon can most easily be caught at this time of year. The name came from tribes who caught this fish in bodies of water such as the Great Lakes and Lake Champlain.

Another name for this month's full moon is the Full Red Moon, because the weather and atmospheric conditions during this season can often make the moon look reddish when it rises through a haze.

And finally, because crops grow tall at this time of year, this month's moon is sometimes called the Green Corn Moon or the Grain Moon.

Full moons occur every 29.5 days on average, when the moon is directly opposite the sun from the perspective of Earth. This causes its whole disk to be fully illuminated as a large, bright circle. Usually, when the moon is full, it passes either above or below Earth's shadow, but sometimes, when it is perfectly aligned, it travels right through the shadow, causing a lunar eclipse, when its disk is dark.

Blue Moons don't happen too often, which is why the phrase "once in a Blue Moon," has sprung up to mean only very rarely. After Tuesday's event, the next Blue Moon isn't set to occur until 2015. 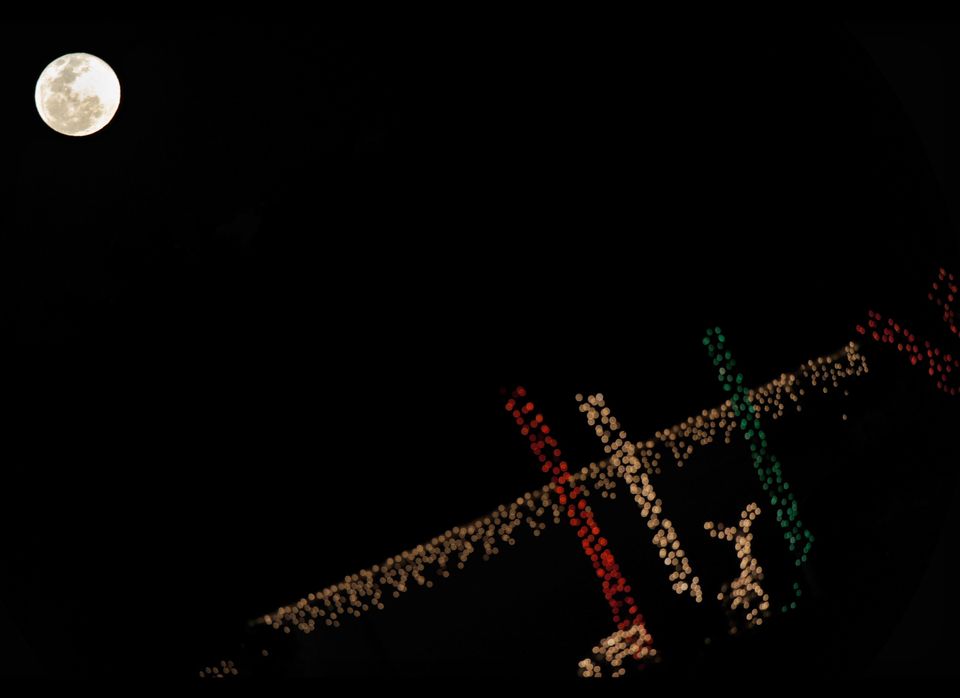