A startling new photograph of Mars shows beautiful blue pools of water just right for a refreshing swim--or so it seems. 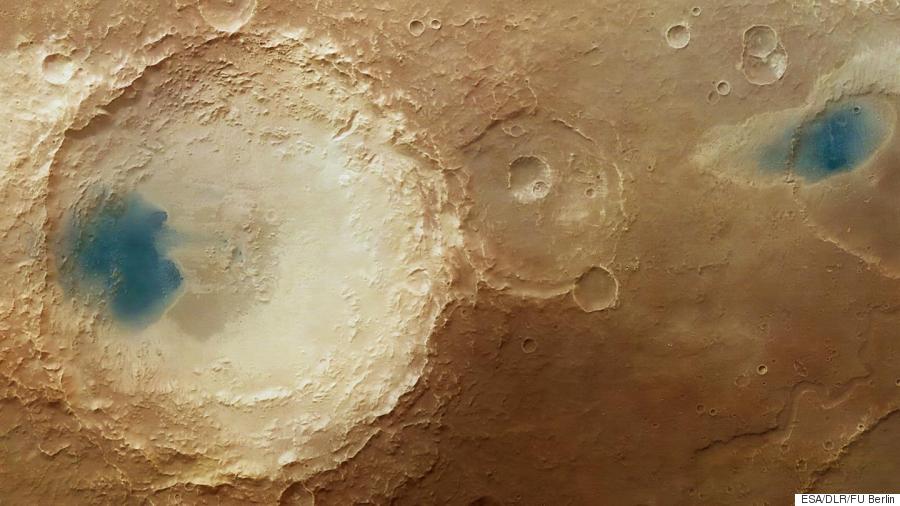 In fact, the blue regions in the image--which was taken by the European Space Agency's Mars Express orbiter--are dark sediments that look like liquid water because of the way the image was processed, according to the agency's website.

Water is known to exist on Mars, but the Red Planet is so cold that, with the possible exception of some transient melting, it's all frozen solid.

The photo shows the Arabia Terra region of Mars, a dense patchwork of ancient impact craters of all sizes--some heavily sculpted by the superfast winds that scour the planet's surface. The deposits in the large, 70-kilometer-wide crater on the left and the smaller crater on the right contain the sediments, which are composed of an igneous rock known as basalt. The sediments have accumulated over time after being blown into the craters by the Martian winds, which the agency says can reach speeds of 100 kilometers per hour.

The image was taken by the orbiter's High Resolution Stereo Camera on Nov. 19, 2014 and released by the agency on June 1, 2015. The orbiter has been orbiting Mars since December 2003.