Blue Valentine goes from grim to devastating when Ryan Gosling and Michelle Williams have sad sex on the floor of a cheesy love motel, fighting between thrusts. She slaps him meanly and squeezes her eyes shut, as if trying to wring the disgust from her body.

They're staying in the motel's "future room," a claustrophobic and outdated fantasy of a future not worth sharing. It's a late attempt to save a love so long dead they can't bear even hate sex long enough to satisfy either of them.

Gosling has said that the much-discussed scene felt real, and Blue Valentine's director, Derek Cianfrance, thinks its authenticity is why the MPAA stuck the movie with an NC-17 rating in December (later bumped down to R after protest).

"It was a compliment because the film didn't really show anything," Cianfrance told The Huffington Post. "So people must have been feeling things watching the film, and I thought that spoke to the power of the performers." 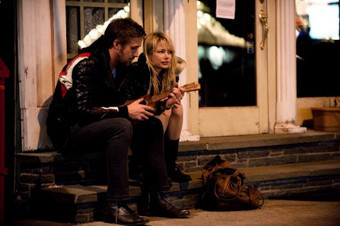 Williams' performance earned her an Oscar nod. We don't see more than a few agreeable glimpses of her nipples and Gosling's rear end, but what's going on in their faces is graphic enough. Cianfrance shot the scene in the cramped bathroom of a real love motel in King of Prussia, Pennsylvania, using two long-lens cameras, one following each actor as closely as possible. The violence of the edits between their spaces shows how far apart they have fallen.

The future once looked a lot bigger for this tired pair, we learn as the movie hops back to their heady first weeks together. Dean (Gosling) is bearded and covered in tattoos, constantly smoking and hauling boxes for a moving company. Cindy (Williams) is quietly ambitious, studying to become a doctor and desperate to escape her unhappy, blue-collar upbringing.

Dean charms Cindy with lines like, "In my experience, the prettier a girl is, the more nuts she is, which makes you insane. You're probably nutty coo-coo crazy!" He serenades her with a ukulele in the street and eagerly goes down on her in her childhood bedroom, a pastel refuge from her parents' warfare. Soon Cindy is smitten, and pregnant. They cry tears of joy at their courthouse wedding.

The past scenes were shot entirely with a hand-held camera and often in just one take, Cianfrance said, to create space around the characters and allow them to come together to fill the frame.

After shooting the past scenes, the actors had just a month to age six years and collapse all the early possibilities of their marriage. Cianfrance had Gosling and Michelle live together in their rural Pennsylvania house with their onscreen daughter (Faith Wladyka) and watched as they struggled with the real stresses of having to share a bathroom and do the dishes three times a day. Their grocery budget was based on Dean's salary as a housepainter and Cindy's a nurse (she never did become a doctor)-- $200 every two weeks. 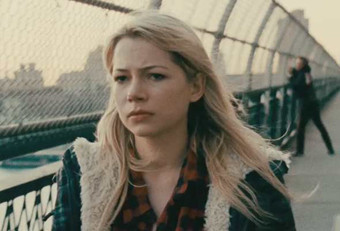 He accelerated the relationship's corrosion by starting off-screen fights between his actors. One night he told Gosling to go into Williams' bedroom and try to make love to her. Gosling, soundly rejected, ended up sleeping on the couch.

"They're great actors, but they aren't faking it either," Cianfrance said. "If something gets said or done that creates bad feelings it's not going to get forgotten. But I'd have them go to the family fun park after a day of fighting. They would have to go out to the real world and put a smile on."

A month later and each about 15 pounds heavier, Gosling and Williams started filming their heartbreaking present. Cindy is unfeeling and impatient; Dean wants no more than the company of his family and a job that allows him to drink beer in the mornings.

"I don't want to clean up after two kids," Cindy says in the movie's bleak opening scene. Dean has made a mess of the breakfast table by licking up raisins from the oatmeal "like leopards" with their daughter.

"You're a big girl now, sweetheart, so don't have any fun," he tells the child, whose happiness is the only thing he and his wife can agree upon, even if they have conflicting ideas about how to exclude her from their misery.

Cindy and Dean can't get through a meal without wounding each other, let alone bridge the divide between contentment (his) and purpose (hers). It's hard to see how she ever expected him to meet her needs and all too easy to blame her for hating his significant shortcomings. Frequent trips back to the wide-open past show a hipster dream sequence of a courtship that happened too quickly for them to map out space to grow.

Their love has gone missing, and Cianfrance leaves it up to the viewer to decide what happened to it. He empathizes with both characters and doesn't ignore the maddening reality that a relationship, like fruit or eyesight, can go can bad from nothing but the passage of time.

"To me there's no one reason why Dean and Cindy split up," he said. "It's a million reasons, and then at the same time, it's just a feeling."