With its wealth of temperate rain forest, freshwater, and marine ecosystems, Southern Chile is a global conservation priority place that stands out for its high levels of endemism and marine biodiversity. Chile has one of the world's longest coastlines, stretching close to 4,300 km along the Pacific Ocean, and close to 2,000 km of shoreline around channels, fjords and coastal islands. It is home to unique species, including the endangered blue whale. However, a range of pressures on natural marine resources, including unsustainable exploitation, habitat degradation and other human induced impacts continue to be considerable threats to the marine biodiversity along the Pacific coast of southern Chile. 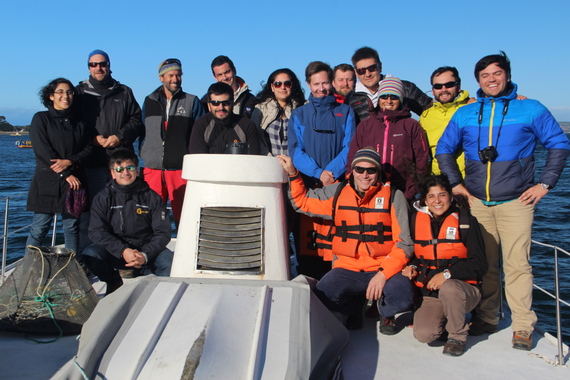 The blue whale is the world´s largest animal on the planet and moves around Northern Chilean Patagonia during their feeding season in Austral waters, every summer. This area is also heavily used for salmon aquaculture, and this sharing of habitat is the crux of the problem. In order to contribute to the long-term protection of this important marine species, WWF Chile's Marine Program launched a campaign to create a positive change in the salmon industry, to work with producers and aid the industry in improving their approach to environmental and social issues.

During the last Our Ocean Conference celebrated in Chile, a partnership was developed among the Environmental Ministry, Consejo Nacional de Producción Limpia, WWF Chile, Blue Whale Center (BWC), Universidad Austral de Chile, Los Fiordos, Aquachile, Blumar, Pesquera Camanchaca, Ventisquero and Multiexport commited to evaluate and mitigate the potential impact of the salmon industry on the blue whale habitat. Since then, a number of activities have been taking place according to the time table developed. These activities included one day navigation for blue whale sighting and tagging procedures observations in charge of the BWC experts and cetaceans sighting training courses. The identification of salmon farm installation that would be involved in the impact evaluation, allowed the development of whales and dolphin sighting training courses for all salmon farm workers. With the aim of making them part of a cetacean sighting network. During a blue whale tagging expedition, 3 animals were tagged in Chiloé inner waters. As result of this, it has been possible to see the whales mainly moving up north area in the Gulf of Ancud. Area highly used with salmon farm installations.

Saving this iconic species is essential as it will be used as umbrella, flagship, and environmental species for promoting general conservation and management actions for the entire marine biodiversity. This specific partnership is part of a holistic approach for marine conservation, which includes effective implementation of Marine Protected Areas, science and stakeholder involvement, keeping at the same time sustainable development options open for local inhabitants, and the implementation of better practices from the private productive sector, such as aquaculture.