It is not particularly fun to call to mind the longest days of your life. But sometimes you do it anyway. I'm not sure why, but you do. The days on which people I love have died (and the days leading up to that, when you are waiting for it all to end) were without a doubt the longest of them. Sick days, kidney stone days, those are lengthy. The days you move out of a beloved home rank up there too.

It's a funny thing, this kind of long-day recollecting, because most of the rest of the time all I can think is how fast the day passes, how quickly time seems to be moving, always trying to find any way possible to slow it down.

Another of my longest days came in summer, the time when the farmer's market is revved up and Saturday morning's singular purpose becomes market-going. I have made a note-to-self not to let the worst life has to offer take place in the summer ever again. There's just too much at stake.

So many long days had led up to this summer day that they all compete in my psyche for the title of The Worst. Nobody sets out to get divorced when they get married, at least not anybody I know. So when it dawns on you that you are going to have to do it, even though you just tied the knot months ago, there is little consolation. When you finally admit out loud, in words, that this sacred thing you did, in front of God and the world with the kind of Vera Wang Luxe lavish loveliness that befits only the truest of true bonds, was actually not the sacred thing you had tried very hard to convince yourself it was -- well now, that's a long day, a soul-crushing day.

On the bright side, when I left this wrong relationship, I had someplace to go. That someplace was the condo my sister and I had bought together, where she still lived. It strikes me now how cinematic, how metaphoric that day was, with torrential rain and hail coming down in Chicago, destroying everything but also washing it all away. I walked into the apartment, dropped all of the wet at the door, and got in bed. I was reminded of the other times I lay in bed when it wasn't night time, times when I was physically ill, and how strange it feels to be there while the rest of the world goes about its business.

Peg came in and did what she does best. She pulled the blanket up over my fetal position. She told me this is not the defining moment of my life. She said this wasn't such a surprise, that I hadn't been myself in quite a while, and that the hardest part, the deciding part and the taking leave, was over. She left me with boxes of Kleenex, not a handful of Kleenex and not just one box, but boxes. It was a gesture that stays with me because it said: you're going to cry your eyes out. You're supposed to. Have at it. Which I did. The tears wouldn't stop, in fact, and I stayed there in the bed like an invalid for two long days.

In the middle of this drama was a Saturday morning, farmer's market morning. Peg wanted me to go, to get some fresh air and fruit and vegetables and flowers. I wanted none of it. The day you don't care about the bounty of summer at the market is a day you hope doesn't come again soon. She waited through the early morning hours when we normally would have headed over, and finally when it was clear I would not be able to pull myself away from the wreck, she went, then returned. I didn't see what she walked in with, but later the scent of tuberoses told me there was a vase on my dresser.

I could hear the sounds of baking going on in the kitchen. Come and measure the flour, Peg said. I wouldn't. Come and mix the berries with sugar, she coaxed. I couldn't. Drop the dough over them then? I had nothing of it until I smelled the berries bubbling and the shortbread crust baking. I lifted my zombie-self out of bed and walked to the oven, which could tell I needed a hug. I sat down in front of her with my box of Kleenex and watched the cobbler bake. It might not seem like it, but it's going to be ok, I promise you, Peg said. The oven said so too. And both of them were right. 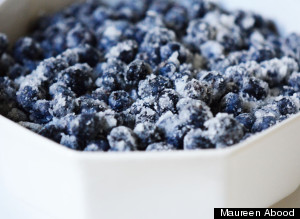 The berries in this are cobbled together with a soft shortbread-like crust, which for me is the finest around, far better than an oat-based crisp (oatmeal cookies do nothing for me, see). Use any mix of berries you like. The recipe is based on a cobbler from Canal House; they also recommend Italian prune plums for this, reducing the cornstarch to 2 teaspoons and adding a hint of cinnamon to the fruit.

In a small bowl, whisk together the flour, baking powder, and salt and set aside.

In another medium bowl, combine the remaining 1/2 cup sugar and the cornstarch. Add the berries and toss to gently coat.

Put the berries into an 8-inch baking dish. Sprinkle the lemon juice over the berries. Drop the dough by heaping tablespoons over the berries, flattening the drops out so that they will bake through evenly. The drops need not connect.

Bake until the berries are bubbling and the topping is golden brown, about 45 minutes. Let cool a bit before serving. Serve with vanilla ice cream. 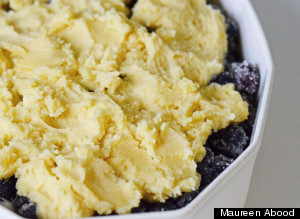