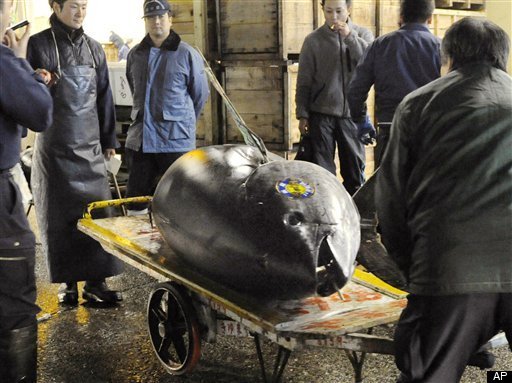 A bluefin tuna from Toi, Hokkaido, which was purchased for a record 32.49 million yen

during New Year's auction at the Tsukiji market in Tokyo on Jan. 5, 2011. (Kyodo via AP Images)

TOKYO -- A giant bluefin tuna fetched a record 32.49 million yen, or nearly $396,000, in the first auction of the year at the world's largest wholesale fish market in Japan.

Japan is the world's biggest consumer of seafood, with Japanese eating 80 percent of the Atlantic and Pacific bluefins caught. The two tuna species are the most sought-after by sushi lovers.

In the last year, there have been several moves to ban or limit catches of tuna, with environmentalists warning that stocks of some species are already close to levels that would render the fish unable to reproduce sufficiently to survive.

Conservationists failed at last year's Convention of the International Trade in Endangered Species of Wild Fauna and Flora to impose a ban on the international trade in Atlantic bluefin tuna to preserve breeding stock, due primarily to vigorous lobbying by the Japanese government.

The International Union for Conservation of Nature, however, has listed Southern and Atlantic bluefin tuna as endangered species.

In a recent interview with HuffPost Food, acclaimed chef David Chang spoke candidly on sustainable seafood and the Japanese appetite for endangered ocean species, the most prominent and dire of which is the bluefin tuna:

"Giant Bluefin tuna sold at Tokyo auction for near $400,000. Seems cheap at the price, which is extinction."

Trevor Corson, author of The Secret Life of Lobsters, The Story of Sushi, and the only Sushi Concierge in the United States, writes on why the record pricetag should be considered relatively meaningless:

The only reason any bidder at the Tokyo auction ever pays that much for a fish is to deliberately spend way more than any sane person should. Blowing that much on a tuna is either a celebration of recent profits, or a bid for publicity to boost a restaurant or distributor's profile. In short, it's money spent on advertising, not on fish.