Greetings from my hardship post. I am at North Lake Harbour on Prince Edward Island. I'm here to witness giant bluefin tuna. 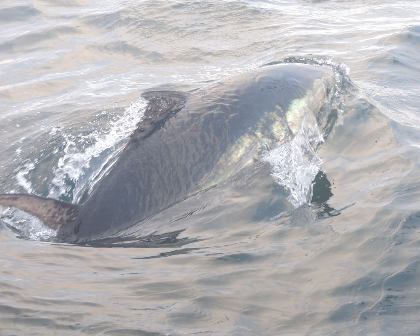 Fishermen like Ross Keus want to develop no-kill bluefin tourism, including catch-and-release charters (which are already operating) and maybe even letting tourists dive with the giants. Diving with giant tuna, at the invitation of the Film Board of Canada, is why I'm here. What an idea!

Throwing herring into the sea in hopes of attracting the tuna, we watched the sonar as, indeed, the fish, represented by red shapes, began gathering beneath our hull and started rising higher. 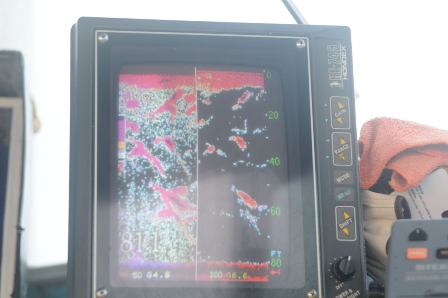 Tuna on the sonar. Photo by Carl Safina.

Suddenly, right alongside, startlingly huge fish weighing hundreds of pounds were whizzing past in blurs, grabbing tossed herring at high competitive speeds and crashing through the surface with exploding bursts of white foam.

At that point, I did the only sensible thing; bit down on my snorkel and got into the water.

There -- incredibly -- I fed them herring from my fingertips as they coursed by. The great creatures are swift, agile, and in perfect control of their movements.

Other boats were out, too, but they weren't there to swim. Around us, some boats hooked, fought, and released the fish for sport. Some caught and killed the fish for export. All fishing is strictly regulated. Each boat here is allowed one kill per season. Sport charters cannot exceed one released fish per trip. But compared to swimming with the fish, it pained me to see them hooked, even if the intention was release.

In the past I have hooked giant tuna and, yes enjoyed, feeling the extraordinary power of a huge animal fighting for its life. But for me the thrill of that has gone. These great fish often migrate from the shores of one continent clear across to the next. During those great migrations, across most of the ocean, they are relentlessly pursued. In Japan, buyers pay thousands of dollars -- sometimes hundreds of thousands -- for a single fish. They are deeply depleted, and for years the fish had vanished from here, too. Now they have returned here in substantial numbers, and we are all trying to learn some lessons. It's not all about sushi in Japan. The fishing supports local communities here and in Cape Breton. Catch and release is perhaps a better way for fishermen to earn money from the fish, though even released fish experience stress and occasional mortality. Better yet, our captain, Ross Keus, would probably be delighted to arrange a swim-with-giant-tuna charter. 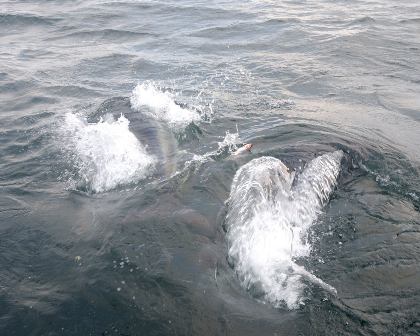 Two after the same herring. Photo by Carl Safina.

As I swam in the water and the giants came 'round again and again, they showed absolutely no fear of me. Nor were they in any way threatening. And for once I, the fisherman, gave them no reason to fear, nor did I present any threat. It was like a dream, come true.